In honor of Juneteenth, a day celebrated by many Black communities to commemorate the end of slavery, we are sharing the story of  an Old Settler Black family.

Harvey County is made up of diverse cultures.  Many families can trace their history back to the early settlement period of the 1870s and 1880s.  Traditionally,  focus has been on the white settlers in celebrations like Old Settler’s Day. However, Black and other mixed race families,  like David Anderson & Mary Rickman Anderson Grant , were homesteading in 1871. In 1880, a group of at least 32 Black individuals, including Katie Vance, settled in Newton. Their stories are harder to find, often only brief mentions in the newspaper provide scattered clues. Many times the stories are not neat and pretty. This is the case with the family of M. Thomas as seen through the eyes of local newspapers.

Recently, a short blurb in 1888 about a 15 year old “colored girl”  in Police Court caught my attention. Curious to see if I could find out more, I did some digging.

The M. Thomas family came to Newton in about 1880 from Trenton, Todd, Kentucky.  The family consisted of Madison, his wife, Matilda, and three children, 13 year old William, 11 year old Mary, and 7 year old Ellen. In 1885, the family was living along north Main between 10th & 11th and Madison worked as a laborer.

The two of Thomas children experienced difficulties with the law in the late 1800s, all of which were reported in colorful detail by the local papers.

In 1887,  14 year old Ellen Thomas must have fallen in with a rough crowd.  In September, she was arrested with four men for disturbing a meeting at the Second Baptist Church.  The men, George Morrow, C. Coleman, George Vance, and Bob Wylls, were each fined three dollars and court costs. The judge showed “mercy to the woman” and did not fine her.  Later, he reportedly regretted not being harder on her. (Newton Daily Republican, 9 September 1887)

At the end of September, Ellen was arrested along with Charles Coleman  for stealing a watch while at the county fair.  This time the judge was not so lenient and Ellen was fined two dollars and costs. 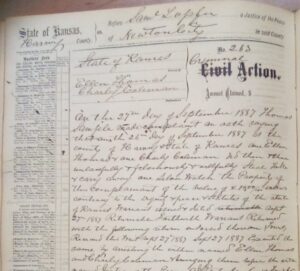 In March 1888, Ellen  was arrested for drunk and disorderly. The Newton Kansan noted that “Ellen is an old offender and has figured quite conspicuously in the courts in this city on several former occasions, and the officers’ patience is about exhausted.” (1 March 1888) She plead guilty and paid the $5 fine plus costs.

In April, Ellen was again mentioned in the Evening Daily Republican under the heading “Too Hilarious”

“Ellen Thomas a colored woman, who has on more than one occasion figured romantically in police court circles, and Albert Lewis also colored, were taken before Police Judge Spooner . . . who fined them each $5 and the court trimmings for disorderly conduct on the streets Friday night.” (22 April 1888)

The reporter failed to describe what was “Too Hilarious” about the situation.

A more serious crime was committed in October when the Newton Daily Republican  reported that she was “Fined for Her Fun.” Ellen was described as the “frisky colored maiden, who assaulted the young white girl Miss Scott.” The trial was held in Judge Lupfer’s court and Ellen was fined $5 and costs which the editor felt would “no doubt cause her to have more respect for the law.” (22 October 1888)

She again caught the attention of the police and newspaper readers in October 1891. After serving time  in jail for an “affray” with Mrs. Weston (another Black woman), Ellen was released, but soon found herself back in jail for attempting to help a fellow prisoner escape. The Newton Daily Republican recounted:

“It seems that while in jail she lost her heart to one of her fellow-prisoners, a colored man giving his name as McCloskey, and ever since she received her freedom has been trying to devise a way for him to escape. Today Sheriff Pollard caught her giving him two saws made especially for cutting iron and promptly arrested her.” (22 October 1891)

This time she was sentenced to 15 months at Lansing for the attempt. She returned to Newton in 1893, “a rather notorious colored woman.” Ellen next appears in Police court with several others on charges of being operators, inmates or frequenters of questionable houses.” However, in this case she was found not guilty.

Ellen appears once more in the Newton paper in a strange story featuring “Female Footpads.” 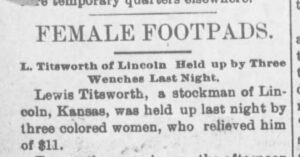 The Newton Kansan on January 26, 1900 colorfully describes the hold up of “L. Titsworth of Lincoln. . . by three wenches” on West 4th near the Second Baptist Church in Newton.  Titsworth was walking around town to pass the time when,

“he was accosted by the dusky Amazons, one of whom flashed a pistol in his face. He surrendered at once and the woman went through his pockets, taking two $5 bills and a silver dollar.  This was about 8 o’clock; services were going on in the church at the time.  the audacity of the affair left Mr. Titsworth almost speechless and by the time he regained composure the females had flown.”

Warrants were quickly issued for Ellen Thomas, Mary and Gertie Doe. In a strange turn, the February 23 issue of the Newton Kansan noted that

“The criminal docket was wiped up this morning owing to the fact that ‘Colonel’ Titsworth failed to leave his address and refuses to stay in one place long enough to allow said address to become known . . . the case dismissed.”

The editor noted, “The colonel is a smooth proposition and will no doubt be the defendant in a state case some time.”

Ellen Thomas also seemed to disappear from Newton and the record.

New Information: The Evening Kansan Republican, 25 January 1900 records that Ellen Thomas and Cynthia Stottamyer are the same woman. See also Evening Kansan Republican, 16 February 1900, 6 August 1909; and Wichita Beacon, 8 May 1905.  Cynthia Ellen Stottermeyer is buried in Greenwood Cemetery, Newton, Ks. She died Jan 27, 1923 at the age of 51. One could theorize that she got married at some point and changed her last name.

William or Bill was born in Tennessee in approximately 1867. He was 13 when the family arrived in Newton.  By the mid-1890s, he was working as a porter at the Clark hotel in Newton.  He had scuffles with the law off and on.  The most serious event was in 1896 and also involved his sister Ellen. 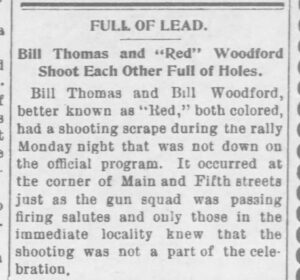 During Republican rally with a large crowd, Thomas apparently took insult at “Red” Woodford slapping his sister Ellen. Thomas drew his 32 caliber revolver and fired, hitting Woodford at least twice. Woodford drew his own weapon and chased after Thomas.  Even though both men sustained possibly fatal wounds, the paper reported that they “showed great courage so far as the effects of the shots were concerned.” Woodford was carried to Harry Lum’s and Thomas to Dr. Roff’s, both too badly wounded to be arrested, neither expected to live.

In May 1897, the Newton Kansan reported “Red” Woodford Captured.“ Apparently, both men were strong enough to escape Newton before they were arrested for the November 1896 shooting.  Woodford returned to the area in May 1897 and Sheriff Charles Judkin wasted no time in arresting him.  The paper reported that Bill Thomas was in Louisiana.

Madison and Matilda Thomas seemed to have lived a much quieter life than  their children.   One can only wonder what they thought.

In 1892, sorrow struck the family when Matilda died of “a severe attack of asthma.” on December  10. Her obituary was a brief announcement in the paper. She was buried in Greenwood Cemetery, Newton, Ks.  Matilda was born in Kentucky in approximately 1842.  She possibly met Madison Thomas after the Civil War and they were married.  Their first child, William was born in 1867. 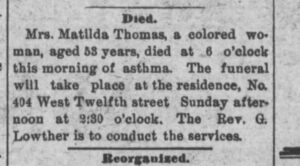 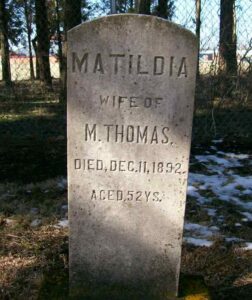 Born a slave in about 1829 in Virginia,  little can be pieced together about Madision Thomas’ life. A small notice in the Newton Kansan for July 18, 1907 notes:

“Thomas is at present time 86 years of age and is growing feeble but at one time he was evidently a good man as the price paid for him was 1200 dollars.”

The article also describes Thomas’ bill of sale for a “negro slave . . .Madison Thomas . .  in Richmond, Va in the year 1858.” When the war broke out Madison enlisted in the Union army under General Thomas and “was given by his own master the bill of sale for his own body.”

Under the command of General Thomas, it is likely that Madison served with the USCT 1st Brigade (14,16,17,18,44) or USCT 2nd Brigade (12, 13,100) and which was raised in Tennessee. He was posted along railroads in 1864 and moved to Nashville with General Thomas to participate in the Battle of Nashville.

After 1911, Madison Thomas, former slave, Union soldier, laborer and Harvey County resident since 1880 disappears from the written record. While his wife, Matilda Thomas, is buried in Greenwood, there does not seem to be a record of his death or burial.