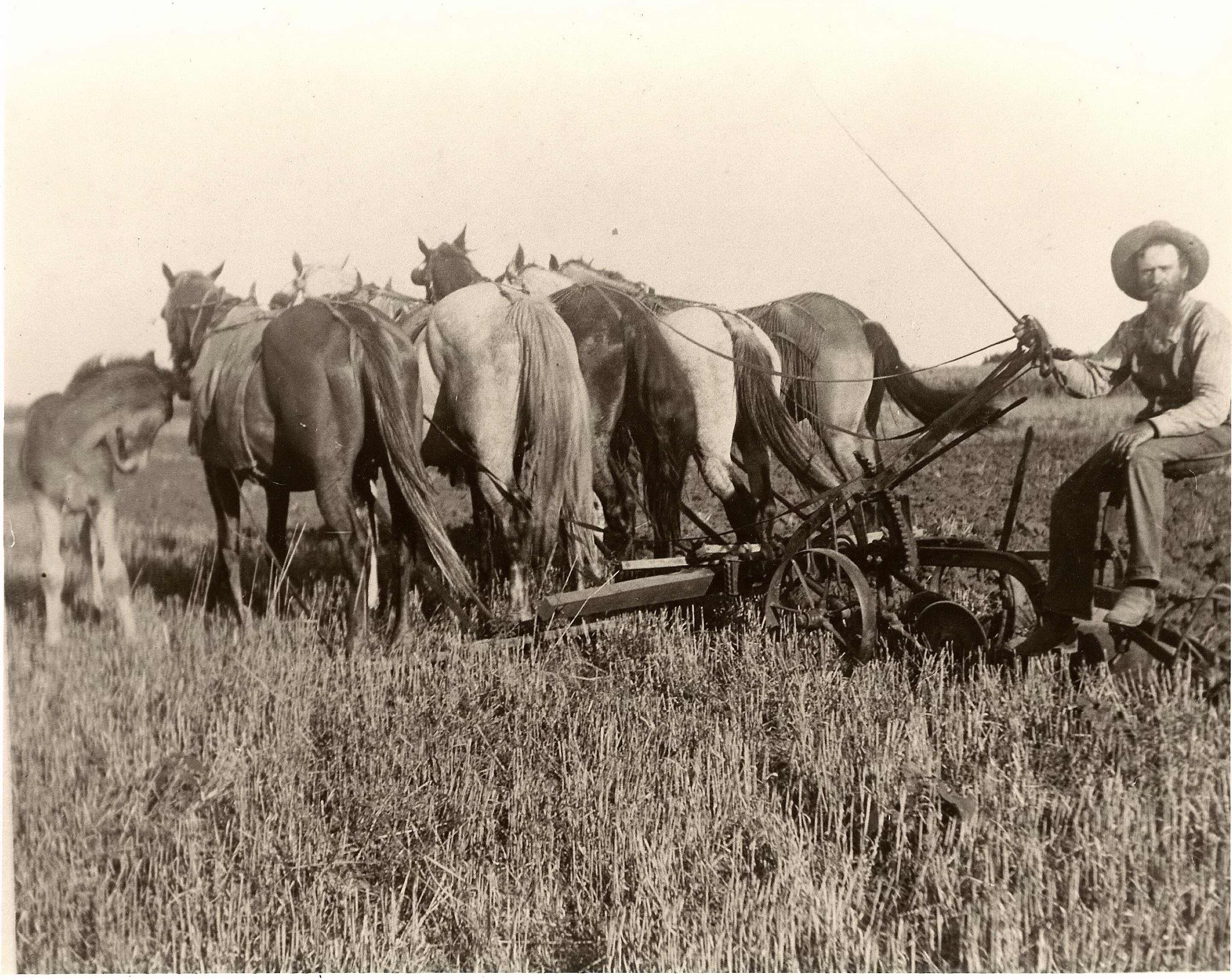 Agriculture in Harvey County: Part of the “Wheat State” Story

Key to the early agricultural growth in Harvey County were the German-speaking European emigrants. The Santa Fe land agent, C.B. Schmidt, encouraged them to settle in Harvey County by offering a good price for government-granted fertile railroad land and other amenities. The immigrants started farming with Turkey Red hard winter wheat. Other farmers in Harvey County and surrounding counties took up the practice. Eventually, Kansas earned the reputation as “the breadbasket of the world” and was nicknamed the “Wheat State.”

Through on-line exhibits, this slideshow series gives short stories about Harvey County and its cities; and provides a sampling of the stories which can be discovered by viewing the on-site exhibits at HCHM, by examining source material in the Research Library and by utilizing the HCHM photo collection.

For even more stories of Harvey County’s people, events and businesses, check out:

Check the HCHM website regularly for the addition of new on-line slideshows in this series on Harvey County, Kansas.

Click anywhere on the first image below to scroll through Unit 6 – Agriculture in Harvey County: Part of the “Wheat State” Story. 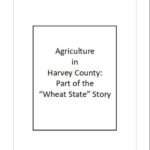 Click this slide to start Unit Six on “Agriculture in Harvey County: Part of the Wheat State Story.” 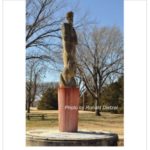 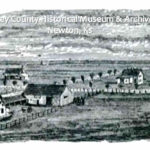 1877 – A Harvey County Settlement. A group of Mennonite Christians from Heubuden, West Prussia (near today’s Gdansk, Poland) established the settlement of Goldshaar (Golden Plowshare). It was located east of Newton. At the heart of the settlement was a European style cluster of farms and families—the Wilhelm Quiring family and the Hermann Sudermann, Sr. family as well as the Hermann Sudermann, Jr. family. Within close proximity were the farms of several Regier and Claassen families. Illustration source: Collection of HCHM. 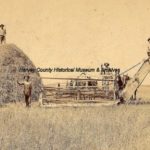 Eastern Harvey County Wheat Harvest Scene – ca. 1895 photo. In late May but usually in June, wheat was ripe and ready to harvest. Within a short time, it needed to be cut, bundled, stacked, threshed and cleaned. This harvest scene in eastern Harvey County was captured by L. Scott, Photographer, Claflin, Kansas. Shown in the middle of the photo is a reaper-binder with an auger carrying bundles of wheat to the waiting wagon on the right. The reaper-binder cut the wheat crop and bound the stems into bundles or sheaves. On the left side of the photo, bundles are being placed on a hay stack. The bundles had to be carefully stacked to protect the grain until threshing. Photo source: HCHM Collection 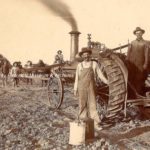 Rural Harvey County Wheat Harvest Scene – ca. 1895 photo. With many farms being 160 acres or more in size, no single farmer was able to get a crop harvested unless a sizeable crew was available—either through cooperative neighbors or hired help. Even with a large group working together, wheat harvest was labor-intensive and involved long days. Shocks (bundles) from the hay stack were pitched into the threshing machine. By using a steam engine for power, the threshing machine loosened the wheat kernel from the husks and straw to which it was attached. Photo source: HCHM Collection 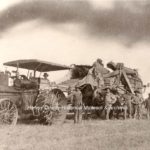 Rural Harvey County Wheat Harvest Scene – 1902 photo. Will Umholtz’s threshing machine and crew show how farming had started moving in the direction of mechanization but was still quite labor-intensive. Among the crew were John Deschner (2nd from right at the head end of the separator), Will Umholtz (standing by the steam engine wheel) and Jacob White (standing in front of the wagon with hands on hips). Both John Deschner and Jacob White had farms in the vicinity of Trousdale (later called Zimmerdale). Photo source: HCHM Collection 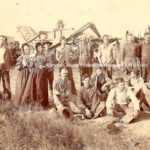 Rural Harvey County Harvest Scene – ca. 1895 photo. The custom was for the farmer to provide meals for the harvest crew – which equaled lots of food to be prepared for all those hungry stomachs. This particular group had a dinner wagon (behind the regular wagon which can be seen over the shoulders of the man on the far left). The two women in the long prairie style skirts, blouses and bonnets would have prepared the food in the dinner wagon at a spot in the fields where the harvest was happening. Since the fourteen men in the crew were able to take their meal breaks in the field, time was not lost for a trek to the farmhouse. Photo source: HCHM Collection 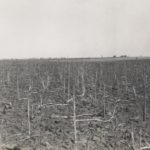 Potential calamities equate to agricultural uncertainty. Abundant looking fields don’t ensure abundant harvests. Farmers learned to stay away from “counting their chickens before they’d hatched.” A crop could be wiped out in short order by wind, hail, disease, excessive rain, drought or insects. This ca. 1936 photo shows, “A field of corn that’s badly damaged by ‘hoppers’ adjoining A.D. Claassen’s farm.” The wise farmer made plans after the harvest was safely in and the money was banked. Note: The picture comes from a collection of Harvey County Extension office documents and photos which are housed at HCHM. The collection provides noteworthy insight into agriculture during the 1920s and 1930s. Photo source: HCHM Collection 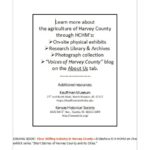 This pictorial history unit about Harvey County was compiled by Ronald Dietzel. Acknowledgement – Through their input and suggestions, Kristine Schmucker (HCHM Curator) and Jane Jones (HCHM Archivist) made significant contributions to the compilation of this unit. With the area’s strong focus on agriculture and especially wheat production, it became a natural fit for Harvey County to become a hot spot for the grinding of wheat into flour. Go to Unit #7 “Agriculture in Harvey County Stimulated Flour MIlling Industry” and get an overview of the flour milling industry in Harvey County.