At the time of her death in 1923, Mary Rickman Anderson Grant was among the last of the first settlers of Harvey County, but her name never appeared in any of the old settler lists. She is not pictured in the Kansan 25th Anniversary Edition printed in August 1922, a year before her death.  Her story, and that of her pioneer family, remained alive through oral tradition within the larger Rickman/Anderson/McWorter/Clark  families.

Mary’s story starts in Sparta, White Co., Tennessee where she was born April 1835.  Her father’s name was Nathanial Rickman and her mother’s name may have been Sophia.  In the 1860 Census, Mary is listed as the head of household with four children, Joseph, America, Lucy and Tennessee.  At some point she met and married David Anderson and moved to Ohio.  David Anderson served in the Civil War in Co I 14th Reg. U.S.C.T., which was the same regiment as Mary’s brother Joseph Rickman.  Perhaps he introduced Anderson to his sister and they got married.  By 1870, the entire Anderson family was living in Clemont County, Ohio with David listed as head of the household with three more children, James Wayman, Thomas Jefferson, and Nathanial.  A daughter, Carrie, is born later that year.

Homesteading on the Prairie

In 1871, the Anderson family decided to move to Kansas. Like many black families they saw the opportunity to own land. The Homestead Act of 1862 allowed a citizen to file “first papers,” pay a $10 fee and claim 160 acres of land in the public domain.  The Anderson family left all that they knew and traveled by covered wagon to Emporia, Kansas for a chance to own their own land. From Emporia, they traveled to Florence, Kansas, where the family stayed in a dugout while David Anderson went to the homestead site in Pleasant Township, Harvey County.  Here he began building a new home but met with misfortune almost immediately.  One of the horses died, leaving only one older horse for the difficult work of breaking the prairie sod.  Anderson decided to trade the horse for a pair of oxen and continued to work on improving the claim.

Anderson filed for a homestead in Harvey County, Pleasant Township, Section 26, but he did not live to see the fruits of his efforts.  David died on April 3, 1872, leaving Mary with eight children on the prairie.  He was buried on the homestead.

Mary was determined to keep the homestead. Other members of the family helped her complete a sod house.  For the first several years, Mary lived in the small soddy with her eight children, four boys, and four girls.  The boys “slept in swinging beds hung from the cellar rafters so that they would be protected from snakes and insects.”  Wildlife of all types, from wolves and coyotes to buffalo would come within a short distance of the house. Fuel was scarce, so like other homesteaders, the Anderson family relied on cow-chips and corn stalks for cooking and heating.  From the homestead it was an all-day trip to Peabody, the site of the nearest mill for the Anderson family.  The older boys would take a sack of corn and go by horse to the mill where the corn could be ground into cornmeal.

Death from accident or illness was a constant threat to the new settlers.  In 1872, Mary’s daughter, America Turner died.  Three granddaughters, Estelle & Linnie (1879) and Alta (1881) also died and were buried in the family plot on the homestead. 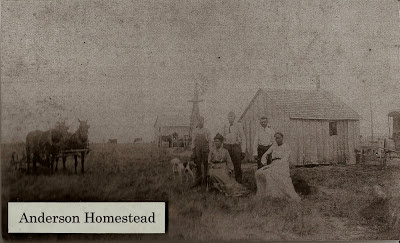 Challenges on the Prairie
An early challenge that faced the Anderson family was a winged creature known as the Rocky Mountain Locust. August 7, 1874 no doubt started out like any other day for the Anderson family.  Perhaps Mary was up early making breakfast when she noticed that the sky seemed to be darkening.  At first, she may have thought the low, dark gray cloud “being blown swiftly from the northwest” was a rainstorm.  It was soon apparent that this was something else entirely.  Billions of grasshoppers had arrived in “swarms so large they blocked out the sun.”  For three days the locusts, only 1.25-1.4 inches long, whirred and chewed their way across Harvey County.  In their wake, total destruction.

“At the end of that time every stalk of corn and garden and every vestige of vegetation that was green enough for them to eat simply was not.  It did not exist.  All paint and even the old black boards and logs were eaten until they looked like new lumber.”

The Anderson family confronted another challenge of the prairie.  In 1876, a prairie fire broke out near Whitewater, south and east of the Anderson claim.  Soon the flames were sweeping across Harvey County in a ten mile wide swath.  A neighbor  lost his barn and 20 head of cattle.  Young Jefferson Anderson was home alone at the time.  He did the only things he could think of – he turned the oxen loose and chased them to the creek.  Amazingly, the house was spared.  The main loss was of a pig pen and a stable.

Forty-six year old Mary Anderson married Orison Grant, a Civil War veteran, in September 1878.  A Justice of the Peace performed the ceremony.  Grant  was 61 at the time according the marriage license. 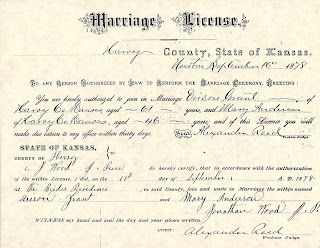 In 1889, Mary made the final $8.00 payment on her homestead in Pleasant Township – the farm was officially hers.

Orison Grant died February 3, 1893.  His obituary noted that “people that knew him intimately dubbed him ‘General’ which title always pleased him.  He was respected by all who knew him.” (Newton Kansan, 3 February 1893, p.3)

Keeping the family together

Mary stayed on the homestead until 1910.  At that time she sold the farm for $8,500.  Family was important to Mary and  it was important to her that the family stayed together.    When she moved to Newton, she had the six members of the family who had been buried in the family plot on the farm moved to Greenwood Cemetery, Newton.

During the month of  February, in honor of  Black History Month, we will be featuring related stories from Harvey County. Much of the information on the Rickman/Anderson/Grant family is based on oral traditions preserved by Marguerite Rickman Huffman & June Rossiter Thaw and research by Karen Wall.  We are grateful for their willingness to share the stories of this Harvey County family.

How Many Townships are in Harvey County? Which Two were Originally Part of Marion County?

How many townships are in Harvey County? 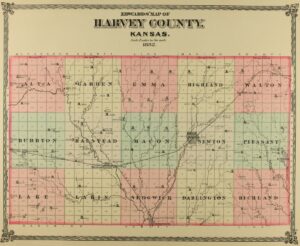 Which Two Were Originally Part of Marion County?

Who owned the first mill in Newton?

Who owned the first mill in Newton? What was it called?

Elias Wood established the first steam gist mill in Newton in 1875. Newton City Mill was located on E. 3rd & Oak. In 1886, Wood sold the mill and worked as a drayman. The mill burned down in about 1903. 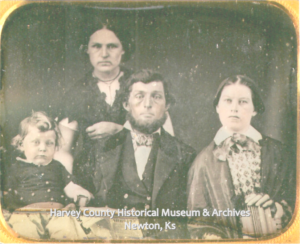 Born in Ohio in 1823, Elias spent his young adulthood farming. He married Nancy A. Cutler in 1853 and they had five children. In 1872, bought a steam gist mill. In 1875 he loaded the mill up on 13 railcars and moved the mill from Peoria, Ill to Newton Ks.  He rebuilt the mill exactly the same at E 3rd and Oak.

Description of the Newton City Mill. 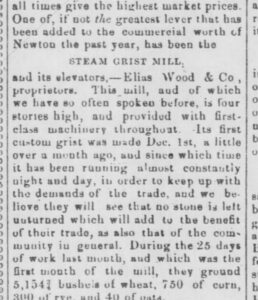