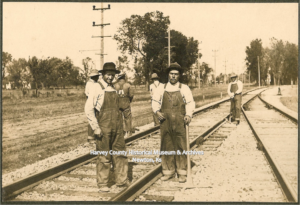 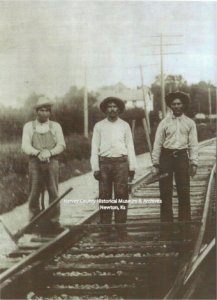 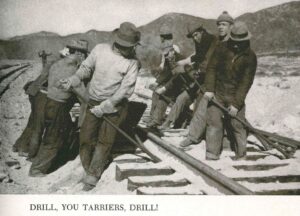 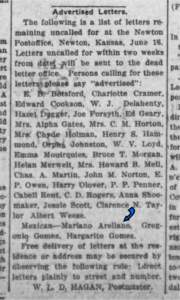 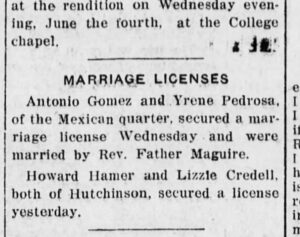 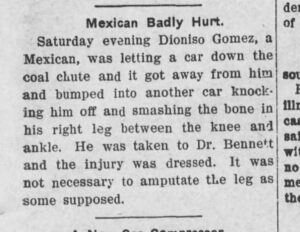 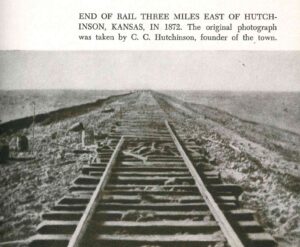 “With the passing of ‘Jo’ Conway, as she was familiarly known, one of the true Christians and saints of the city is taken.” (Evening Kansan Republican, 5 October 1929.)

Miss Johanna Conway was one of several women that worked to improve the health of the community following the first World War.

The roots for the Public Nurse got it’s start when the Bethel Deaconess  Women’s Auxiliary was established on March 22, 1910.  One of their many projects was to sponsor a public nurse in Newton.  In 1916, Sister Anna Gertrude Penner became the first “visiting nurse.”  Her duties were varied and went beyond caring for the sick to educating people on proper hygiene and safety. In 1918, the responsibility to finance the program was shifted to the city of Newton.

At the same time a group of women at St. Mary’s Catholic Church became concerned about the conditions of the “Mexican Camps.” The Santa Fe Railroad provided the housing for the Mexican laborers and their families.  Conditions were far from ideal in the early buildings.  Several women from St Mary’s parish devoted their lives to caring for those in need including Miss Johanna Conway, Miss Lillian Fitzpatrick and later Miss Lucile Thomas. 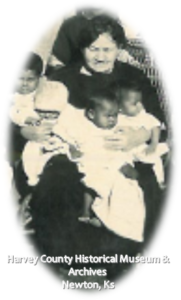 Johanna Conway was born in 1857 in Ohio. By 1895 she had moved to Newton, Kansas where she lived with her brother and sister at 219 E 4th. She dedicated her life to providing help to the Mexican community.

From 1920-1923, Miss Jo was involved in providing assistance to the Mexican American community in Newton. In 1920, she was the chairman of a committee with “plans for Americanization work among the Mexican people.” (Evening Kansan Republican, 8 September 1920) 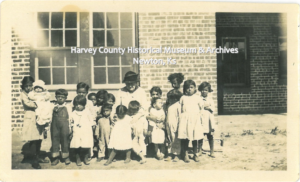 On the back: “Miss Jo with her little Mexican friends.” Josie Victorio Collection, HCHM Photos.

Goals of the committee included teaching English and needed skills for future employment including “industrial work and sanitation  lines of work.”  Rev. William Schaefer gave “instruction” each Wednesday afternoon. He was encouraged “to have the Americanization work taken up by the committee of women of the St. Mary’s parish and pursued actively . . .  the betterment of the Mexicans.” 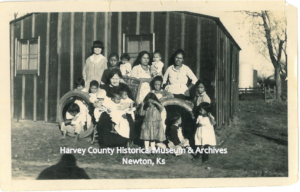 In October the Evening Kansan Republican reported “under the able leadership of Miss Jo” a “band of willing” women spent two afternoons each week “teaching both old and young Mexicans those things which they ought to know but do not know.” On October 28, the group of students and teachers held a musical showcasing their progress. Tickets were $1 and the proceeds would “aid in making it possible to further the activities” among the Mexican community.

“Humanitarian Work of the Community”

In fall of 1922, a call went out from the Southwestern Division of Red Cross seeking assistance to “relieve the suffering of the children” in South Russia. Conway supervised the efforts of local women to create clothing for these children in need.  In her report at the Red Cross Quarterly meeting Miss Jo noted that over 1500 pounds of new and used clothing had been shipped for Russian Relief.  Of that 1500, 700 pounds were new garments made by local women for babies and small children.

In 1923, Miss Jo served as one of seven directors for a newly formed Public Health Service. After 1923, her name vanishes from the newspapers. Her obituary indicates illness in her last years. Johanna Conway died October 5, 1929 at Bethel Deaconess Hospital, Newton, Kansas.  She was buried in St Mary’s Cemetery.

“A devout member of the Catholic church, a pioneer  worker in St Mary’s parish. . . . She was a leader and organizer in humanitarian work of the community. . . . Her welfare work with the Mexican settlement began at a time when the homes of these people were mere huts and she has been working assiduously here until her illness, a work that cannot be measured on this earth.”

Recently an unique object was donated to HCHM. 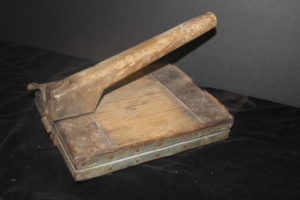 Connie Palacioz donated a hand made wooden with metal tortilla maker used by her grandmother, Luz de la Fuente Cuellar (1872-1941).  She noted that her grandmother brought it with her from Mexico when she immigrated to Kansas. 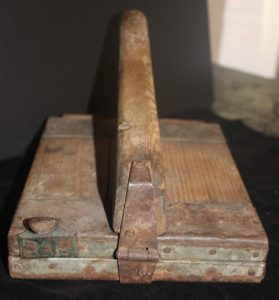 No doubt she prepared many delicious meals using the tortilla maker. 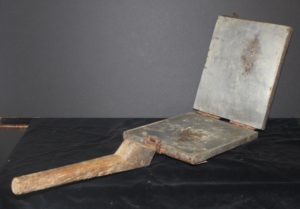 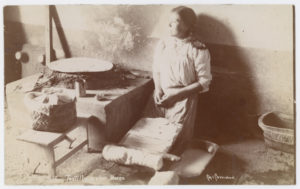