We often feature Harvey County citizens that are prominent or at the very least “respectable.” Information can be found on most people in various census’, obituaries, and city directories with a little digging.

Then, there are the people in the shadows.  Their names appear in the police court or mentioned in connection to a tragedy. Rarely is there a photograph. With names like Amy Flowers, Ada Combs, and Mrs. Swan, these women appear in history briefly and without leaving too many clues as to who they were. In the late 1880s-1890s, there was a push to rid Newton of  ‘bawdy houses,’ ‘joints’ and ‘gambling dens.’ Women who inhabited the bawdy house were often in the news of the day.

This post is the first of a series of several featuring some of the stories surrounding these women.

In January 1889,  Mrs. Dick “Jennie” Risdon was indicted for “keeping a House of Ill Fame or common Bawdy House,” along with Malley Combs “owner and keeper of a bawdy house or brothel . . . situated on Myrtle Street in the city of Newton.” 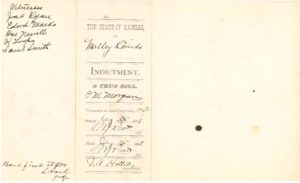 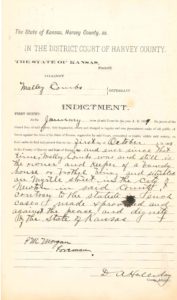 Several men were also indicted. Cora Cummins, “a female under the age of eighteen years, to wit, the age of sixteen,” was a witness in the indictments of Daniel Cummins, William Murry, and John Hurst. Men who “carnally and unlawfully know one Cora Cummins . . . contrary to the statues and against the peace and dignity of the State of Kansas.” 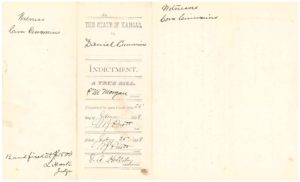 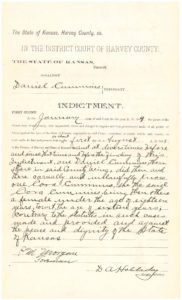 No further information could be pieced together on the young Cora Cummins or the situation.  Malley Combs appears in the story below about Cora Day.

“Inmate of a House of Ill Fame”

Another woman that frequently made appearance in Police Court was Cora Day.  Throughout the 1890s, she appeared in the Newton papers somewhat frequently.

By 1896, Cora Day ran her own “house of ill fame.” In August 1896, the newspaper editor described events at Cora Day’s house in “the southwest part of town.” Three young men “invested in a cheap alcohol drunk and a cheap afternoon’s entertainment.” They became “noisy and disturbed the neighbors” and police were called.  The house was raided and the three men were taken to the city “refrigerator.” Cora seemed to disappear and avoided arrest.

The newspaper reporter did not hesitate to describe her in harsh terms.

“Cora is about the most unattractive specimen among the ‘other kind’ of women in Newton and the boys were evidently bound to have the worst society as well as the worst of drink.”

The three men paid their fines using the names of “Tut Fisher, Bill O’Keefe and Henry Jones . . . the young men ‘gave instructions’ at police court to ‘keep their names out of the paper.”

Even though the names of the women involved was printed, the men involved could avoid their names  appearing in the newspaper, or use a alias as they did in the case of Cora Day. In  March 21, 1890, the editor noted he was lenient this one time.

“two gamblers and a number of females of loose character who were brought in and duly fined.  By urgent request – and on account of the respectability of the parties – their names will not be given . . but in the future they need look for no leniency.” 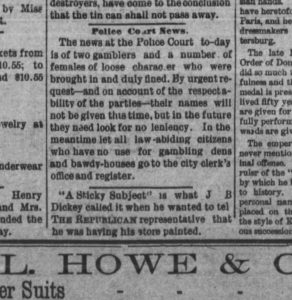 Living in and running  a bawdy house could be dangerous.  Cora Day was no stranger to violence.  In 1893, Cora received “surgical attendance . . . sewing up several bad cuts she had received in a free-for-all melee that occurred at her establishment the night before.”  (Newton Daily Republican, 20 December 1893)

In 1896, Cora Day had moved to Wichita and lived at 224 South Fourth Ave. where she “was beaten almost to death.” The Wichita Daily Eagle reported that a man who gave the name “Jack” “called to the house for the purpose of spending the night.”

“When he was dressed he drew from his coat pocket a silk handkerchief on the inside of which was a cotton one.  The handkerchiefs contained a half pint of the largest buckshot, and grabbing the girl by the throat, began beating her over the head.. . The girl screamed and the other occupants . . . rushed to the room, but the  man grabbed the girl’s revolver and kicking out the front window made his escape.”

The police were unable to find the man concluding that “the man was crazy.” Some witnesses reported that he was “from Newton, Kan., and a watch will hereafter be kept on men from that city.”

Following the beating in Wichita, Cora returned to Newton.  Trouble found her again.  In 1897, the newspaper editor observed that “misfortunes do not come singly to Cora Day.” This time, she was charged with “keeping a bawdy house and unfit to properly care for her children.”

The newspaper followed the sad story over several days in August. One the headline read, “An Inhuman Mother.” She was charged with cruelty, abuse and ill treatment of her children Ida, 15, and Clarence, 14. Day was found “guilty of beating and mistreating the children, who were sent to the poor farm.” 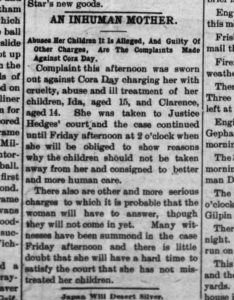 Cora plead guilty to the charge of disturbing the peace. Police Judge von der Heiden fined her $10, but she had no money.

“The judge thought it would be an inhumane act to commit her to the hot, dingy city prison, so instead, induced the woman to promise that she would leave town . . .  by Thursday.  . . if not, he will send her to prison.”

After the August incident, Cora Day disappeared from the Newton papers.

One final mention in October 1897.  The newspaper reported that the Day children were “sent from the (Harvey) county poor farm to Springfield, Ohio where they will be cared for properly.”