For Part 1 –The Dark Period – the Spivey Ticket

Shortly before the August 1871 election, James Gregory, leader of the Gold Room faction, left the compromise ticket and headed his own ticket. Although the compromise also known as the “Spivey Ticket” carried by a strong majority and won the election, the Gold Room faction was not ready to give up. Throughout the fall of 1871, they continued to oppose the businessmen’s faction through intimidation and interference, making enforcement of any ordinances passed by the City Council difficult if not impossible.

The Gold Room Faction had several factors in their favor.

Many of the earliest businesses to open in what would become Newton were saloons. A reporter for the Wichita Tribune (24 August 1871) observed just a few days before the Aug 26 election that Newton had ten bawdy houses “in full running order and three more underway.  Plenty of rotten whiskey and everything to excite the passions was freely indulged in . . . Rogues, gamblers, and lewd men and women run the town.”

The cowboy businesses were not only operating in Hide Park, but also on the north side of the tracks as well.

Henry Lovett opened the first saloon in the spring of 1871 at the northwest corner of 4th & Main. Another saloon known as the O.K. Saloon was located on 5th Street with two additional “houses” located east of the OK. One writer claimed that every third building in Newton was a saloon. The Gold Room, owned by Isaac Thayer, was located between 5th & 6th on Main and was considered the “grandest.”

Perhaps the most influential businessman of the group of saloon owners and gamblers was James Gregory.

Gregory came to Newton in the summer of 1871 and entered a partnership with J. B. Means which lasted until November 1872 (Newton Kansan, 7 November 1872).  From 1871 to 1873, Gregory was the primary wholesale dealer for liquor in Newton. 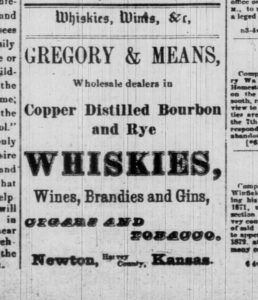 In 1871, Gregory emerged as a leader of the Gold Room faction, opposing those that wanted a more civilized Newton. He broke away from the compromise or “Spivey” ticket to head his own for the first election inn August 1871.  Even though he lost, he was not deterred. Throughout the remainder of 1871 and 1872, the two groups struggled over the  fate of Newton’s future.

Following the August 20 shooting in Hide Park, the violence continued throughout the fall of 1871 and those from the Gold Room faction seemed to stand in the way of effective law enforcement.  In September, the shooting death of  Deputy Carlos B. King again put Newton in the spotlight.

In another incident, several Texas cowboys were shooting randomly in front of the American House. Night policeman, Charles Bowman, attempted to disarm them. During this attempt another man, Tom Hicks, shot  Officer Bowman through the hip, and another Texas cowboy shot the officer a second time. An off duty police officer was standing nearby watching, but he  refused to provide aid.

An additional act of defiance occurred  that evening when a mob of approximately thirty well armed “thieves and roughs of Newton” crowded Main street to intimidate the civil authorities.  Although Hicks  initially escaped, he was later arrested and brought to trial in Wichita. Even though the shooting occurred in front of several eye witnesses, no one would testify and he was released for lack of evidence.

On February 22, 1872 Newton was granted third class city status. An election for city officials was scheduled for April 22.  James Gregory won the election with 131 of the 215 votes cast for mayor, becoming the city of Newton’s first mayor.

At the  first city council meeting several ordinances were passed aimed at curbing the violence in Newton. Most of the early ordinances addressed vagrancy, gambling, and disturbing the peace. Others restricted houses of prostitution to south of the Santa Fe tracks.  Another ordinance prohibited  carrying concealed weapons, only police officers were allowed to carry a firearm. Still another required all businesses to close on Sundays.

The early council also used their position to further their own businesses.

“any person who shall keep a billiard saloon, ball alley, or dram shop with or without charge or shall directly or indirectly sell, or dispose of any spirituous, vinous, fermented, or other intoxicating liquors in any quantity less than a gallon . . .” without a license was subject to a fine.

Of course as Newton’s  only wholesale liquor wholesaler, Gregory’s, was the one business exempt from the license tax requirement.  (Ordinances, Ord. no. 5, p. 46.)

Throughout this period, police officers worked to enforce these rules and arrests were made, however the police judge, with the support of the mayor, did little to impose fines or jail time. The police judge, who was often drunk, also frequently failed to turn the fines collected to the City. Record keeping was also shoddy or nonexistent.

“Cutting the Throat of our Own Town”

In another instance of Gregory’s lack of care and foresight, a citizen wrote a letter to the Newton Kansan describing an incident that happened right outside of  Gregory’s front door.

The citizen described the incident  as “another of those police farces  conducted by and before the officials of the city . . .which every good citizen should be ashamed and such proceedings cannot fail to injure any town however bright its prospects.”

A young man from McPherson county had come to Newton to do business. By the time he had concluded his errands, it was sleeting and his horse became unmanageable and ran on the sidewalk and broke a wooden plank in front of Gregory’s store. The young man was immediately arrested, taken to police court and fined. The writer concluded that this young man, like several others, would now take his business elsewhere.  “We can hardly believe that our council and mayor realize what they are doing and how they are cutting the throat of our own town by such proceedings.” (Newton Kansan, 2 Jan. 1873)

Newton’s first city council was largely ineffective with a focus on holding on to the transient trade as long as possible. Commitment was lacking. Isaac Thayer, council member and owner of the Gold Room Saloon, only attended one meeting in August 1872. During the first three months of 1873, the city council was inactive and no  meetings were held in January or February. Record keeping was scattered or abandoned all together. As a result, large sums of money went unaccounted for and ordinances were ignored.

In times past and even recently, all that has been necessary for the biggest loafer in christendom to do . . . was simply to get drunk and then treat the crowd. If someone happens to be arrested he is given a school-boy trial; marched to the calaboose, left until sober, and then let out, the expenses charged to the city. The city council might pass ordinances till doomsday under such officials, and to no effect. (Newton Kansan, 14 Nov. 1872)

Shattering the Power of the Gold Room

Elections were held on April 1, 1873 and it was clear the time of the  cowboys, saloon owners and gamblers was ending. H.C. McQuiddy, a businessman selling farm supplies was elected mayor overwhelming over E. Chamberlain, a member from the 1872 council and saloon owner. Only one man remained from the original council, David Hamill. Hamill also ran a business which served the agricultural community. The 1873 council immediately got to work  appointing a new city marshal and reviewing fines on the “vices.”

After reviewing Gregory’s ordinance no. 5, a new ordinance was passed which stated, “a petition signed by a majority of the residents of said City over the age of 21 years both male and female, which said petition must state that the applicant is a person of good moral character and a suitable person to sell intoxicating liquors . . “ A two thousand dollar bond needed to accompany the petition before the council would consider it. If approved the license was granted for one year and the applicant had to pay three hundred and fifty dollars.

The application from Harry Lovett, owner of the first saloon in Newton, the Side Track Saloon, was rejected.  In 1873, only six saloons were licensed.

The End of the Gold Room Saloon

By the summer of 1873, Gregory saw the writing on the wall and moved his business to Grenada, Ks, where he established a new wholesale business. In August, James Gregory, along with his wife, said goodbye to Newton for good.  The August 7 notice in the Newton Kansan reported that Mr. G.S. Bradley purchased the Gregory home in Newton. By December 1873, a new business featuring fancy notions and millinery, opened in the building in the 600 block of Main. Tragedy quickly befell the new business venture. After beginning as one of the ‘grandest’ saloons in Newton and a hub for early politics, the notorious Gold Room Saloon building burned to the ground in an overnight fire on Dec 8, 1873 (Wichita Eagle Dec 11, 1873).

In 1871-72, the Gold Room was the social center of Newton. The saloon owners had contact with every man in the city, and their influence was felt.  By the 1873 elections, there were other places to gather. Judge Muse remodeled the Delmonico Saloon into the Delmonico Dance Hall. The Delmonico became a place to gather, to enjoy traveling troupes and hold public balls.  Schools and churches were established, along with literary clubs and a small library.

The focus of Newton was shifting.