“Hell upon Earth, with all It’s Horrors:” Hide Park

“Hell upon Earth, with all It’s Horrors.”

Even before the first train arrived in Newton, the town was getting a reputation. Tales of constant gunfire and lawlessness were spreading already in June.  One can imagine the heat, dust and smell that surrounded the town with herds of cattle adding to the mix.   Increasing the chances for violence were the Texas cowboys arriving after a long drive ready to blow off some steam and the complete lack of law enforcement. Newton in 1871 was the  perfect storm for lawlessness and general mayhem.

One example that was recorded occurred on July 4th.  A group of cowboys decided to celebrate at Perry Tuttle’s dance hall in Hide Park. Not content with gambling, drinking or the dancing girls, they thought up some mischief. They forced everyone out of the building, made all of the dance hall girls lie down on the ground, and proceeded to riddle Tuttle’s building with bullets. (Topeka Daily Commonwealth, 11 July 1871.)

Another Texas cowboy observed, “Newton was one of the worst towns I ever saw, every element of meanness on earth seemed to be there.” Still another gave this advice; “when the dance halls were flaming and the saloons frothed trouble, when it was best to keep your hand on your holster and your mouth shut going down that avenue.”

Newton was earning a reputation as one observer put it, as a “Hell upon Earth, with all it’s horrors.”

“Because the Girls Showed so Much Hide”

Hide Park,*** the most infamous area of early Newton, was the setting for most of the violence, including the General Massacre.   The rough and tumble, anything goes section of the new town was located just south and west of the AT&SF Railroad tracks. The area got it’s name from a newspaper description that claimed the area was called Hide Park, “because the girls showed so much hide.”

While businesses with new wood frame structures were springing up on the north side of the tracks, the south side consisted of hastily built shacks ready for the cowboys.  Although the businesses catered to the ‘cowboy trade,’ local men also found their way to Hide Park. This unique mix of men prompted a reporter for the Daily Commonwealth to observe that “the society of Newton is mixed and incongruous. Gentlemen associate with roughs, and gamblers seem to be held in high esteem.” Cattlemen were seen everywhere “in  the gambling shops, drinking saloons, and in the establishments at “Hide Park’.” 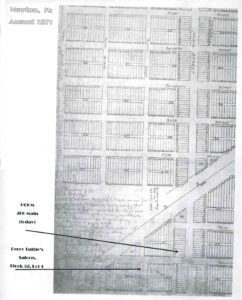 “Hippity Hoppity of the Dancers“

By the late summer of 1871, five buildings made up Newton’s ‘red light district.’  The buildings included two large dance houses and three smaller buildings that served as brothels. Late into the night music would pour from the dance halls and one could hear the “hippity hoppity of the dancers” at all hours.  The women drank and danced with the men and made “exhibitions too indecent for description. . . a staid man would think hell had broke loose assuredly, to witness one of these disgusting dances.” 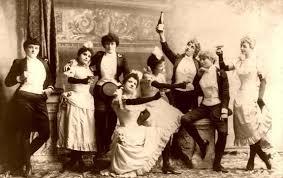 “Here you may see young girls not over sixteen drinking whiskey, smoking cigars, cursing and swearing until one almost looses [sic] the repect the [sic] should have for the weaker sex. I heard one of their townsmen say that he didn’t believe there were a dozen virtuous women in town.” (Wichita Tribune, 24 August 1871)

Gambling tables were arranged around the dance floor. 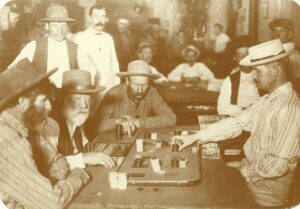 “Festive cowboy, gamblers, saloon men, and roughs of every description began to flock in . . . “at the beginning of June and “three or four dance houses were erected on block 52, each with ample room for dancing, and also, for dispensing the inseparable  concomitant whiskey. . . . All night the halls were filled with cow-boys, gamblers and roughs who, in company with the ‘soiled doves’ ‘treaded the mazes of the giddy waltz’ until daylight came, or weary nature failed to furnish strength. . . .In harmony with the character . . . all went heavily armed, their pockets loaded down . . . making each one appear like a ‘travelling arsenal’.”  Muse, History of Harvey County)

Although gambling of every kind could be found on both sides of the tracks, Muse noted that those on the north side had a “gambling house and bar attached, and recently some of the establishments have added fine lunches and concert music.”  The more refined entertainment were added to hopefully retain “the crowds that have found greater attractions at the dance houses at ‘Hide Park.'” 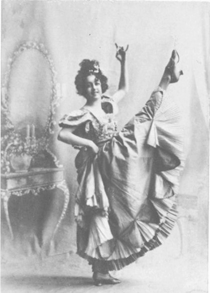 The new entertainments north of the tracks did affect the Hide Park  saloon owners. One reported that he regularly had sales of one hundred dollars a night “previous to the opening of the dance houses, [on the north side] since the establishment of the high-toned institutions they have been reduced to twenty dollars.”  He was considering offering free lunches and music to attract his customers back. He was no doubt referring to the saloons located in the 600 block of Main the most popular of which was the Gold Room Saloon.

“Nothing but a Piece of Hardware is Left”

Hide Park’s heyday was short lived.  By June 1872, it was observed that “many of the saloons and the greater portion of Hide Park are emigrating from Newton to other new towns.”  Some, like ‘Rowdy’ Joe Lowe, loaded their buildings onto a flat car and physically moved the entire business.  By 1873, the number of saloon owners in Newton was six. The Newton Kansan proudly noted the sale of the last Hide Park property in the spring of 1873. The reporter observed that “nothing but a piece of hardware is left to mark the spot where one year ago was a den of brothels.” 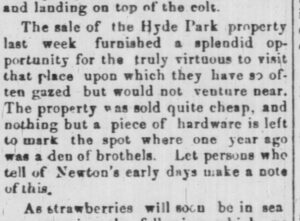 “Let persons who tell of Newton’s early days make note of this.”

During the winter of 1871-72 leading businessmen worked to reform Newton’s image.  One Wichita reporter noted that Newton “is gradually outgrowing the evil reputation of its early days. The morals of the place are improving most decidedly, and in consequence good families are locating in and around the city.” The removal of the last remnants of Hide Park went a long way to creating a new image for Newton. (Newton Kansan, 31 October 1871)

***At some point an alternate spelling, Hyde Park, was used, possibly  to make the area sound more classy than it was.