The Gentleman Who Built a Locomobile: L. P. Lestser

“Other Kansas towns may be able to boast more stylish and up to date appearing automobiles, but Newton is certainly entitled to the distinction of being the only town in the state having an automobile made within it borders by one of its citizens.”

At the beginning of the 20th century, the newest thing was the automobile. Before Ford and his Model T assembly line, there were many other inventors experimenting with creating an automobile using steam and electricity for power. One such inventor was L.P. Lester, proprietor of the Newton Machine Shop, on E. 6th in Newton. 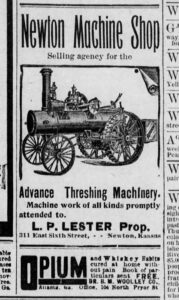 For over a year Lester worked on “fitting up a wagon which could be propelled by motive power furnished within itself.” He planned and constructed the vehicle from start to finish.

“In appearance the vehicle greatly resembles Welsh’s new camp wagon. It is sixteen feet long and six feet wide. The machinery and boiler occupy the rear end, leaving about eight feet in the clear in front.  This space will be fitted up with chairs and benches and will form the living place of the occupants.  Under the floor are two large steel chests, one for coal supply and the other for the water. Mr. Lester estimates that the coal bin is large enough to carry two days’ supply of that fuel. The weight of the entire outfit is about 2,500 pounds.”

To test out his invention Lester, his wife and three boys planned a trip to Wall Walla Washington in the new automobile. Their route followed what was known as “the old Cheyenne route where the grades are not steep” through Nebraska and Wyoming. He expected to average about ten mile an hour with a goal of getting to Walla Walla at the end of summer. (Evening Kansan Republican, 11 May 1902)

Before going on the trip, Lester demonstrated his new locomobile in neighboring communities.

The Moundridge Journal commented, “Mr. Lester who gives the moving picture entertainment at the opera houses tomorrow evening . . . is the gentleman who built a locomobile. . . . He will have his locomobile in the street parade.”

The Lester’s locomobile was described as “similar to a cook shack and is 6×15 and weighs about 3,000. He and his family can all ride in it and also carry everything they want. They live in a tent at places where they stop and are going throughout the country taking their time to it. The locomobile is run by two engines which are fed by coal and gasoline. He travels about four or five miles an hour, but can run it at a speed of fifteen miles an hour which it too fast for roads in the part of the country.”

Lester made money along the way by showing “moving picture shows” and other photographic work.

He also participated in a thrilling race in Moundridge. One of the attractions at the 4th of July in Moundridge was the automobile race. Both vehicles entered in the race were “genuine ‘autos’ made in Kansas.”  One auto was made by Charles Krehbiel for a Moundridge businessman, F. C. Thomas. The other was “the famous vehicle made by L.P. Lester.” Moundridge claimed that “his is undoubtedly the first automobile race that has ever taken place in the state.”

The editor of the Evening Newton Kansas observed that “Moundridge is all puffed up over the distinction it has gained.” He also reported that the “merits of the two machines are discussed just as if they were races horses.”

It is unclear if the race took place or that it was actually the first such race in Kansas. Coffey County had auto races as early as 1903.

L.P. Lester came to Newton in 1889 where he ran his machine shop. After his grand trip to Walla Walla, he moved to Nebraska where he continued his career as an engineer.  He died in Fort Madison, Iowa, Dec 30, 1910.

In 1899, inventors became interested in steam powered vehicles resulting in the Locomobile.    A knowledge of pressure valves was a requirement to operate making them less user friendly. There was also a chance of kerosene fire. Still, between 1899 and 1902, locomobiles were the latest technology and became popular. 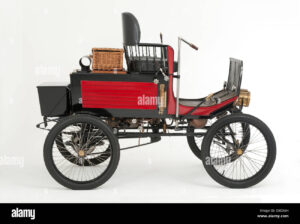