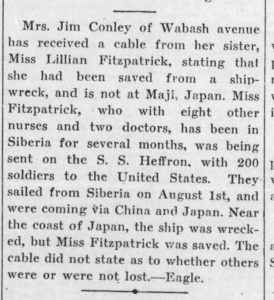 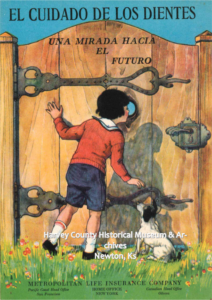 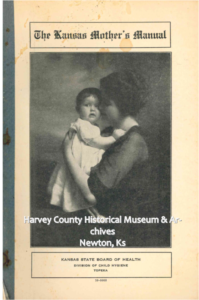 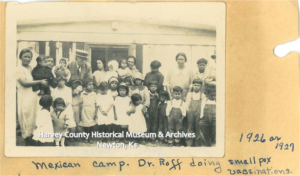 During the Great War, chemical weapons were used on both sides. The French were the first to use gas grenades of xylyl bromide against the Germans in August 1914. In October 1914, Germans used a gas that caused violent sneezing fits, but it was not fatal. Chlorine, a poisonous gas, was introduced to the war in April 1915 during the Second Battle of Ypres by the Germans.  Mustard gas was developed by the Germans and in use by September 1917.  This gas was a nearly colorless, odorless gas that caused internal and external blisters.  Soldiers in the trenches were always on the look out  for an attack and the army provided them with gas masks for protection. 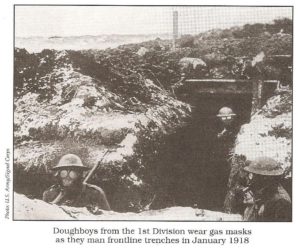 The wearer of the mask breathed entirely through his mouth, his nose pinched shut by a clamp attached to the mask.  The wearer had to hold their breath 6 seconds while the mask was adjusted.  With only four breathes a soldier could inhale enough poison gas to kill. 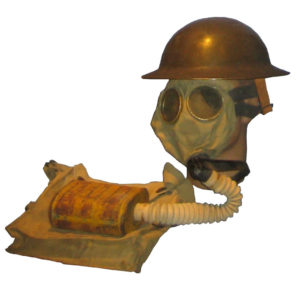 The bag containing the gas mask and respirator was a constant companion of the soldier and there are several in the collection at HCHM.  In a letter home dated October 4, 1918, Lt Harold M. Glover wrote: “It is my opinion that the gas is the most horrible part of the whole business.” 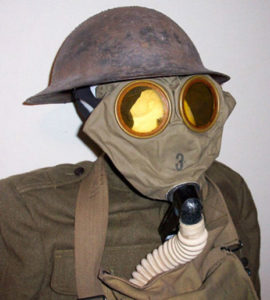 Loy A. Hege, a Harvey County native, died as a result of inhaling gas during battle  in France in August 1918. Hege was born near Halstead, Ks.October 2, 1893 to Mr. & Mrs. G.A. Hege.   As a young man, he  moved to Emporia and graduated from Emporia High School in 1912. He continued his education at Emporia College and received his B.S. Degree from the Kansas State Normal in 1916. He then taught at Abilene High School, Abilene, Ks.  He met  Jane J. Lewis and they were married at her home on 506 Market in Emporia.  Hege completed officer’s training in August 1917 and was a  2nd Lt, Co. A, 355 Infantry.

His family in Harvey County kept in contact with him during the war. Sadly, one letter was returned to his Aunt Kate, after his death in France.

Envelope of letter returned to family of Loy A. Hege. 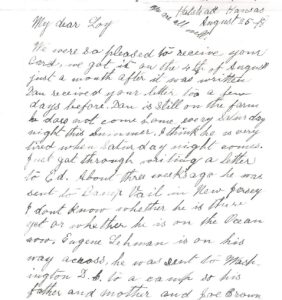 Lt. John Richards  had the difficult task of writing to Hege’s relatives in Kansas.

“It is with deepest sympathy that I write you of the death of Loy Hege, a noble and ever-inspiring officer, a true friend and a pal to all.”

Richards goes on to describe what happened to cause Hege’s death.

“The position occupied by our Company was opened on with shrapnel and gas shells the night of August 7th and he was severely gassed.  He was taken to the hospital about 6:30 am where nurses and doctors did all in their power for him, but to no avail.  He died on the afternoon of August 15th.  He realized the day before his death that he was to go and his last thoughts were of home and home folks.”

Twenty-six days later his wife gave birth to his daughter.

“This makes the fourth gold star to be placed on the high school service flag, and we all hope the last.” (Evening Kansan Republican, 4 December 1918, p. 5)

The United States entered the Great War on April 6, 1917, by the summer of 1918 young men from Harvey County were drafted into the army.  As a first step, they went to training camps before being sent to France. With communication slow, letters from soldiers were often shared in the newspaper by their families.

The Savage family had two sons far from home. Mrs. M.S. Savage shared the news from her two sons, Melvin and William, in the Evening Kansan Republican  in the fall of 1918. Thirty year old, Melvin was stationed at a Camp in Texas for training.  In his letter dated November 15, 1918, he spoke “highly of the canteen service which was appreciated by the soldiers . . . without which the boys would often go unfed.”

On November 25, 1918 Mrs. M.S. Savage received word from her son Will. He reported he had completed training at the Great Lakes Training School and  “that he will have an opportunity to go overseas and will likely be on transport duty.” Sadly, he did not make the journey overseas.

A neighbor to the Savage family, Waive Kline wrote to her fiance, Glenn Wacker in France of the sad news in December.

“Savages rec’d some very sad news Monday. Will was drowned on Monday. He was at Norfolk, Va and seems as if they were getting ready to sail. Some of the boys had been scuffling on deck and had broken the railing . . . Will came along and not knowing this he leaned against the railing and it gave way with him and he fell in . . . .They have never found the body.”
-Waive to Glenn, Dec.5, 1918

“His Prospects Were Bright”

Born in Downs, Ill, 31 December 1895, William Savage came to Harvey County, Kansas with his family in 1906. They purchased a farm in Macon Township. Three years later,  his father died. At that time, William and his older brother Melvin formed a partnership and farmed together. A 1913 graduate of Newton High, William enlisted as a second class seaman in May 1918.

William was an instructor at the rifle range at Camp Logan near the Great Lakes naval training station.  In November 1918, he was sent to Norfolk navy yards.  While aboard the United States steamer Clio, several other men got into a tussle and a bar at the gateway loosened.  Later, when Savage leaned against the bar, it gave way and he fell overboard.  Efforts to rescue him failed. His body was never found and“the sands of the ocean form his resting place.”  An investigation revealed that his death was caused by “the unsafe condition of the vessel.”

“In every home where the Savage family is known, sadness and gloom have been present since it became known that Will, the youngest son of the family, had met his death at Norfolk, Va., by drowning. Particulars of the accident are very meager. His brother, Thomas, left for that place Tuesday with the hope that the body may have been recovered. . . .The mother and brothers have the sympathy of all at this time of awful sorrow.”
–Newton Evening Kansan Republican, Dec. 6, 1918

News of his death was particularly hard to bear as it came less than a month after peace had been declared on November 11, 1918.

“His death in so tragic a manner, coming as it has at a time when hearts have been gladdened by the joyous anticipations of the return of their loved ones in government service is particularly sad.”

The Savage family endured additional sorrow  several weeks later when a second son died.  The Newton Evening Kansan Republican  reported on Dec. 16, 1918  that “a series of tragic events combine to make this a peculiarly sad death.”  Thirty year old Private Melvin J. Savage was training with the 681st aerial squadron at Kelly Field, Texas, when he received the news of the death of his  brother Will.  On the trip home “to comfort his mother who was griefstricken,”  Melvin contracted a severe cold that developed into pneumonia.  He passed away at Axtell Hospital, in Newton on Dec 15, 1918. He was buried in St. Mary’s Cemetery. 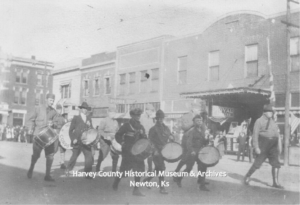 In a ceremony in 1919, the Savage brothers, along with other soldiers from Harvey County, were remembered. In addition to a brief biographical sketch  of those that lost their lives, the complete roster of all Harvey County soldiers  was included in the May 19, 1919 issue of the  Evening Kansan Republican.