Recently, a researcher was in the HCHM Archives asking about the local reaction to woman’s suffrage in Kansas.  It had finally passed in 1912.  What did women think?  Might her Newton grandmother have been excited about the prospects of voting in Kansas state elections?

Using newspapers.com through the Kansas Historical Society, I found “Mrs. D.S. Welsh” (Ella) with over a thousand “hits” in Newton newspapers in the late 19th and early 20th centuries.  Her community passions were temperance and suffrage. Those reforms were “joined at the hip” in Kansas.

Statewide prohibition existed in Kansas from 1881 to 1948, longer than any other state. General on-premises liquor sales were prohibited until 1987.  As of April 2017, Kansas had still not ratified the 21st Amendment which ended nationwide prohibition.  So in tackling this subject I first had to run “head-on” into the WCTU (Women’s Christian Temperance Union). 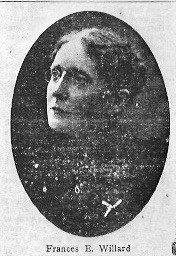 The organization was founded in 1873/74 in Ohio. One of the more effective national leaders was Frances E. Willard.  As an educator, temperance reformer and woman’s suffragist, she served as President of the WCTU from 1879 to 1898.   It was she who helped connect the WCTU to women’s suffrage by believing women could better control liquor by getting the right to vote.  Willard was more moderate than Carry Nation, who in 1901 at the Hotel Carey in Wichita used an ax to destroy the bar. She was arrested. “Mrs. Nation Was Subjected to Many Indignities While in Sedgwick Co. Jail” was the headline in the Evening Kansan-Republican May 13, 1901. Mrs. D.S. Welsh received a letter from Wichita WCTU members that this in fact was correct. After getting out of jail, Mrs. Nation went on to Topeka to do her bidding against the liquor establishment.  Two months of her tactics brought a mixture of opinions about whether her violent approach worked to further the goals of the WCTU.

However, an ad in the Newton Kansan of 1883 would make you wonder if Newton had a liquor problem.  Did G. W. Rogers really mean his Billiard Hall was Temperate or was he being facetious?  Lemonade? Perhaps Mrs. Rogers was sympathetic to the ideas of the WCTU. 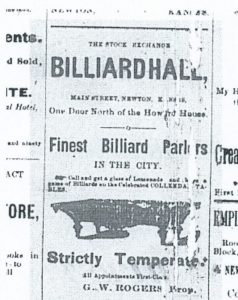 When the WCTU was begun in Newton in 1891, Ella Welsh was chosen as the first President.  Her home would become a “revolving door” for those twice a month meetings.

In 1893, at a local WCTU union meeting, it was announced that a discussion on “Equal Suffrage” would take place. This statement clearly connects the two reforms of temperance and women’s suffrage. During the Seventh District Union convention in Newton that same year “Mrs. D.S. Welsh as president of the Newton Union” welcomed the convention in a very hearty and cordial manner, making all feel at home

In 1895, some members of the local WCTU petitioned the Newton Mayor and Councilmen.  Mrs. D.S. Welsh (Ella) signed the petitions along with 38 others. The politicians were asked to close businesses on Sunday and to enforce Prohibition.  The women knew the sale of liquor was taking place and law enforcement was lax.  There was an attempt by a councilman to get the Marshal on the witness stand.  But that failed and subsequently the matters were dropped.  But the ladies had done something. 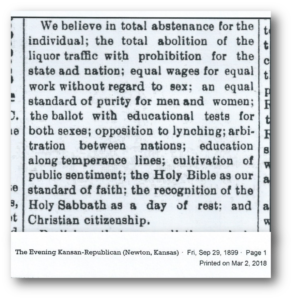 The WCTU was well-organized.  National, state, county and city unions carried on their work. Conventions were held at all levels.  At an 1899 Kansas state convention held in Newton’s Ragsdale Opera House, the WCTU statement of belief was carried in the newspaper.

1899 resolution regarding women’s suffrage printed in the Evening Kansan Republican.

The son of Mr. and Mrs. D.S. Welsh was introduced to the convention. The “little tot named by the seventh district three years ago” was Willard Welsh.  He was named for the President of the WCTU, Frances Willard!

In December of 1899, the WCTU confronted the county attorney, John J. Hildreth with evidence against certain  liquor establishments in Newton.  Mr. Hildreth apparently felt his authority was being usurped by the organization saying “I will control the office and all prosecutions.” He pointed out to the women that he represented all the people, who without naming them directly, included the liquor establishment.

Ella was active in WCTU projects between 1891 and 1923. In 1901, she received the honor of being designated chairman of the committee on resolutions for the upcoming WCTU state convention in Ottawa.  In 1908, the local chapter helped with fundraising for the YMCA. Ella was there. She also received a life membership into the WCTU for “earnest and efficient work.”

In 1910, the WCTU responded to an unfounded report circulating around town that the group was supporting certain local candidates for office.  Ella wrote the denial for the newspaper. 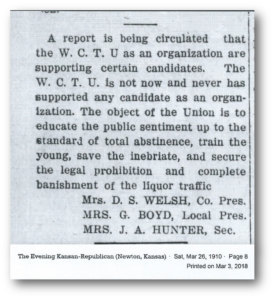 As acting President at the meeting in 1912 it was announced that during 1911 the “North Seventh District, to which Newton belongs, was distinguished for the largest gain in membership, the best report on Sabbath observance, the largest individual union and the union having the most honorary members.”

In May/June 1914, the WCTU made a big push to campaign against Newton’s pool halls by getting residents to sign petitions that would then be presented to the City Commissioners.  They determined that pool halls were a prime location for drinking liquor. According to the “Compiled Ordinances of the City of Newton of 1903” drinking establishments were against the law. However, in the 1914 Newton City Directory eight pool halls were listed. (Note: the (c) indicates “colored.”) 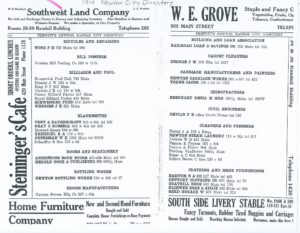 Ella was in charge of organizing this effort with the help of the Ministerial Alliance—a city-wide group of clergymen. Their minutes for May 4, 1914 state “Mrs. Welsh by invitation spoke of plans of the WCTU in securing signatures to petition on proposed pool hall legislation.”

She appointed members to canvass all parts of the city. On June 17, the women along with the Ministerial Alliance, presented their petitions.  But they were lacking 242 signatures of qualified voters (remember at this time women could vote in local elections).  Also, the proposed ordinance did not have a title.  Therefore, the proposal  went no further than the City Clerk and was not presented to the City Commission!

1923 was about the last time Ella is mentioned in the same breath as the WCTU.  Along with county attorney J. Sidney Nye, they talked of how the WCTU supported violators of the local liquor laws—alcoholics.

Ella fought most of her adult life for liquor abstinence, as well as the social and philanthropic goals of the WCTU. She showed leadership and organizational skills and could speak in front of large groups. The WCTU was a powerful force started by women who saw alcohol as a menace to home life and the family.  During Newton’s cowboy era, saloons dominated our social scene.  Even though prohibition existed locally and statewide, it was never fully enforced.

The 18th Amendment to the U.S. Constitution in 1919 made Prohibition the law of the land.  It was the “crowning achievement of the Temperance movement.” However, in 1933, it was repealed.  Ella died in 1934 at the home of her daughter Ruth in Glendale, California.

The WCTU is still an active temperance organization. It has a website. Even though membership is just 1,000 worldwide it still advocates for issues affecting women. 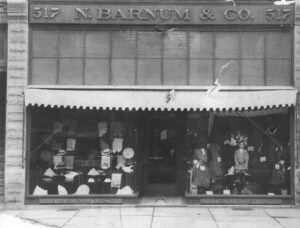 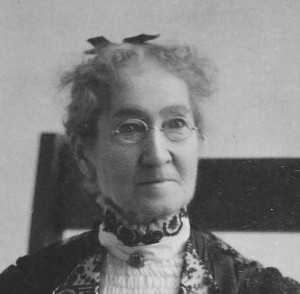 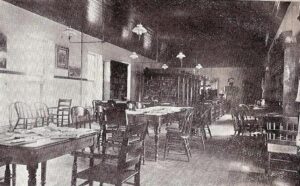