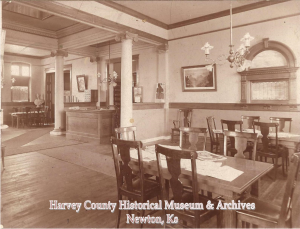 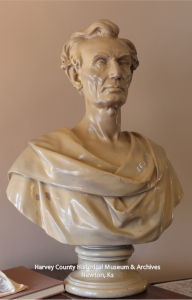 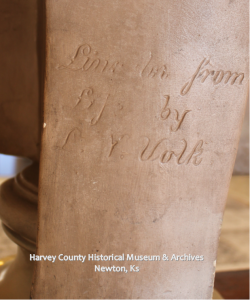 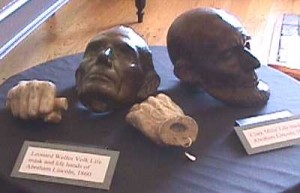 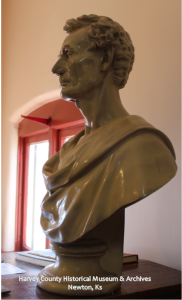 Join us this Saturday, May 3 from 2-4 p.m. for a building birthday party! Explore the museum exhibits, play games and  eat birthday cake with us as we  celebrate our building’s 110th birthday!      A  free event.

This post is the second of our two part series featuring our building. For Part 1:   https://hchm.org/carnegie-library-part-1/.

By 1916 space had become a problem in the library. The Library Board contacted Andrew Carnegie about providing financial support for an addition, but the request was denied. The matter was tabled for several years, but in 1923 the Board began investigating the possibility of an addition.

The architectural firm of Lorenz Schmidt was hired. An addition to the west was constructed. The extension was completed in 1924 and cost $5,000. J.A. Hunter, Library Board President, noted that the addition was “both beautiful and adequate” and more than doubled the available space. The stacks were moved to the new addition and as a result the reading rooms had “an air of unaccustomed roominess which is pleasing and restful.” 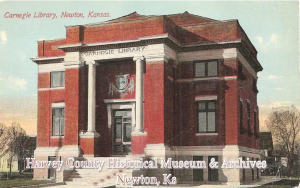 As the building aged, problems began to appear, especially with the roof.  In the early 1920s, the librarians began reporting that  “when rain comes, roof leaks.”  The problem came to a head in June 1926 when two Board members were “caught in the library during a heavy rainstorm.” At the following Board meeting the problem was discussed at length.  Local contractors were called in to repair the leaks; however, in what was to become  an endless cycle, the roof continued to leak.  In 1927, “rubberized roofing” was installed, but in her annual report, Board President Hattie L. Plummer noted that Carnegie Hall was closed to the public because “we cannot keep the room in repair, because we have been unable to stop the roof from leaking.”

In 1928, it was local contractor   M.R. Stauffer’s turn to fix the roof.  He submitted his bid with “a ten year guarantee against leakage.”  At the Board meeting following the completion of his work, the librarian noted it was her “unpleasant duty” to report that the new roof continued to leak.  New guttering was installed next and for a number of years this seemed to solve the problem.

By 1950, the Board was dealing  with the almost constant problem of roof leaks.  Over the years various contractors inspected the roof and attempted to provide solutions.  In 1960, M.R. Stauffer was again called upon to inspect the roof and offer a solution.  In his report to the Board  he noted “that the wrong means of roof repair had been used for years.”  He recommended that the metal roof should be painted, rather than covered with tar which led to deterioration. Maintenance of the building would continue to be more and more important as the structure aged. 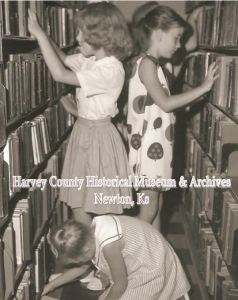 In January 1937, library Board member, John B. Heffelfinger, identified the need for a space for children in the library.  Architect Lorenz Schmidt was asked to give an estimate to remodel the basement to include a Children’s Library, office space, meeting room and lounge.  M.R. Stauffer was employed as contractor.  The Children’s Library was opened in November 1937 with Miss Mary Funk (Mrs. E.E.  Roberts) serving as children’s librarian. 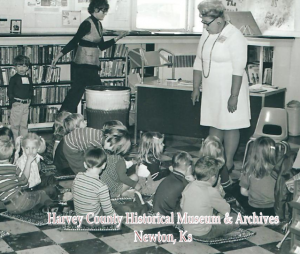 For the next 30+ years children eagerly bounced down the green checkerboard steps to the basement for story time or to check out a stack of books to read at home. 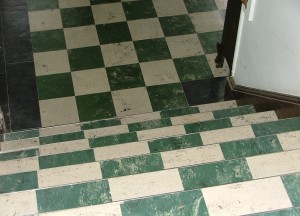 Steps leading to the Children’s Library

“The library is one of the oldest buildings in town, but by repainting the walls, repairing the furniture and fixing the windows, it is a pleasant and comfortable place.” -Mrs. Irene Schroeder, 1949.

As the building aged, other problems began to appear. On December 28, 1953, the heating system, which had served the building since 1904, failed and the library had to close for ten days and “many people realized how important the library was to them.”

Despite the care given to the upkeep of the building by the Library Board and Staff, the world of libraries was changing in the 1960s and 70s.  To meet the new expectations and needs of library patrons, a new structure would need to be considered.

In 1962, a serious push was made to construct a new library, but the bond issue was defeated by voters. The time was right in 1972-73, and a new library was constructed  on Oak Street near Military Park. At that time, the Carnegie building was deeded to the Harvey County Historical Society for $1.

The Carnegie Library Building was placed on the National Register of Historic Places in 1974 and continues to serve the public as the Harvey County Historical Museum and Archives.

We Very Much Desire a Building of Our Own

“We very much desire to have a building of our own, where we can keep up the library as it should be.” -J.W. Patterson, President, Newton Free Library, Letter to Andrew Carnegie, 17 February 1902.

On Saturday, May 3, we will celebrate the 110th birthday of the building that houses the Harvey County Historical Museum and Archives.   A free event, all activities will take place in and around the Museum building from 2-4 pm.  Join us for birthday cake, games and fun! 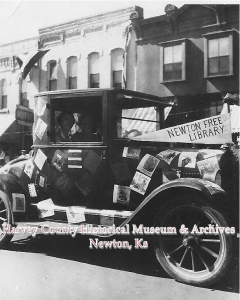 In 1901, the Newton Free Library Board began to think about a library building.  Prior to this the library had been housed on the second floor in various buildings along Main.  This was less than ideal.  To grow as a library and serve the community, a building was needed. At the same time, Newton mayor, G.W. Young became aware that Andrew Carnegie, “American iron and steel manufacturer and philanthropist,”  was providing money to communities to build libraries.  Library board member, J.W. Patterson, contacted Carnegie to request funding.

“If the city of Newton pledges itself by resolution of Council to support a Free Public Library at a cost of not less than one thousand dollars a year and provides a suitable site, Mr. Carnegie will be glad to furnish ten thousand dollars for the erection of a free public library building.” -James Bertram, sec’ty to J.W. Patterson, President, Newton Free Library, March 14, 1902.

After some additional correspondence, Carnegie agreed to increase his financial gift to fifteen thousand dollars for the construction of the new library.

In the spring of 1903, plans moved forward.  The library board hired noted Kansas City architect, William W. Rose and accepted the bid of $11,445 submitted by contractors Reikowsky and Bartel of Hutchinson.  Bids were also accepted for the plumbing and gas from Mr. Hollinger and for steam fitting from Mr. Follet.

The original plans called for gas lighting, but at the August meeting, the Board voted to have the building wired for electricity.  On January 12, 1904, architect Rose reported that the building was completed and that final payments could be issued to the contractors.

Like many Carnegie Libraries, the Newton Free Library was classical in style with masonry construction, two stories with a high base and steps that led to the front entrance.  The first floor windows were set high on the facade. 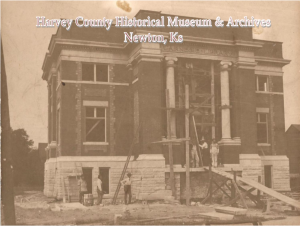 Carnegie Library buildings typically featured large, open interior spaces with a reference desk located so that the librarian could see into several spaces. The layout reflected a commitment to providing public access and a move to professional staff. 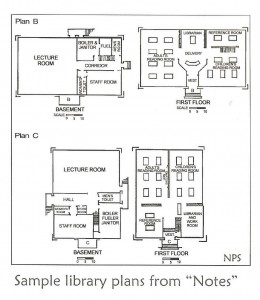 The main floor of the Newton Free Library was devoted to reading rooms, a reference desk, and closed stacks.

The second floor was known as “Carnegie Hall” with a stage and “a neat little dressing room in the southeast corner.” The space was perfect for “dramatics” and other public meetings.

The paper reported that “a constant stream of men, women and children visited the Carnegie Library” on opening day.  The reading rooms were declared “the most beautiful with its handsomely finished walls , oak wood work and beautiful furniture.”  The reporter concluded by wondering, “how the city or librarian ever managed without it so long . . . It is certainly a charming place to spend and hour . . . and will be a favorite retreat.”

Andrew Carnegie provided funds for libraries from 1883-1919 with most of the funding between 1901-1917.   He contributed over $40 million dollars to communities in the United States with most grants awarded between $15 and 30,000 and 59 libraries were constructed in Kansas with the help of Carnegie.

To read about the first librarian at the Newton Free Library click here.

Watch for Part 2 of our series on the Carnegie Library building next week and plan to come celebrate on Saturday, May 3.