When the Newton Free Library opened in it’s new building in March 1904 at the corner of 2nd and Main, the front two rooms were furnished as reading rooms.  Patrons would request the book they wanted and the Librarian would go to the stacks in the room behind the desk and retrieve the requested item. 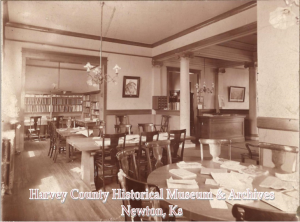 From that time, only two objects remain at the Harvey County Historical Museum & Archives. The below picture hung behind the Librarians desk on the south side. 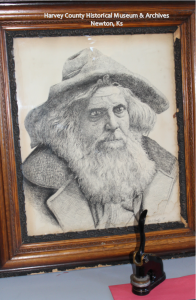 This pen and ink drawing was created in 1898 by Will R. Murphy, a prolific Harvey County photographer at the turn of the century. 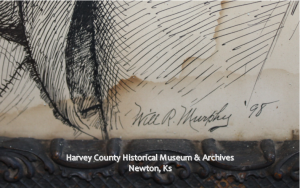 There is no indication on the piece of the identity of the man who is the subject.

Could it be a self portrait? 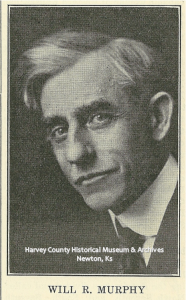 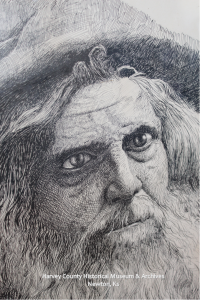 Around the same time, Murphy drew Newton’s Main Street, 1871, based off of a photograph attributed to F. D. Tripp.***Note: 04/2020 further research revealed that it is unlikely that the photo was taken by Tripp.

Who do you think the mystery man might be? Why was it given to the library?

At this point we do not have answers, but the drawing continues to be an intriguing part of the the building’s history.

There is one other object that was part of the original furnishings of the Carnegie Library Building and remains in the Museum’s collection.  Any guesses?

Can You Help Identify this Photograph?

In our Photo Collection, one of the categories is  “Unidentified People.”  Some are a complete mystery with no clue as to place, date or names.  Others, like the photo of the group of young women below,  have a few clues including the photographers mark and several names on the back.  We would like to see if we could find out more about this photograph.

The photo was taken by local photographer, William R. Murphy.  Murphy  was a prolific photographer in Newton from 1897 to 1941. 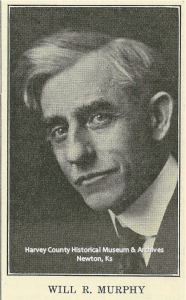 He left Newton in 1941, for health reasons, and died in 1947.We have over 200 photos in our collection with the Murphy Studio mark.

The subjects are fifteen well-dressed young women and one man. 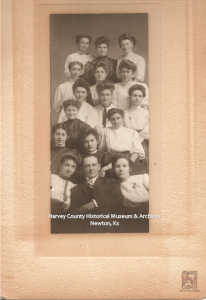 Names are listed on back, but the list does not include everyone and the order may not correspond with the actual photo. 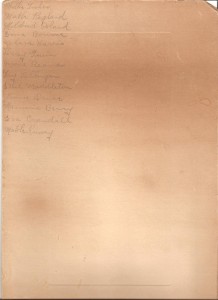 Back of Murphy Photograph

Who were the individuals? What was the occasion?

We do know that Mamie Berry Parsons was a piano teacher later in life. Was this a group of piano students? Or a school group? Or a group of friends?

If you have any information, please contact John Whitlock, HCHM Photo Curator at pictures@hchm.org or 316-283-2221.

In a later blog post, we will feature William R. Murphy and his work as a photographer in Harvey County.  If you have any photos that were taken by him, we would love to hear from you.