On November 11, 1918 the Great War was over. To remember Armistice Day, one hundred years later, this post will let the voices of those involved speak. All were involved in the final push to return Germany to the 1914 battlefields. The German army “could fight no more.”.

Below are excerpts from letters from Harvey County soldiers.  Portions of the letters sent to family were sometimes published in the newspaper. After the Armistice the censorship rules were relaxed and for the first time the soldiers could give details about their location and the battles they fought.   For many these were the first letters received after then end of the war. 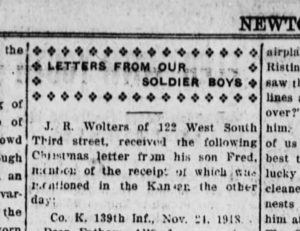 The armistice being signed kept us out of the fourth drive just sixteen hours, so you can see how glad we were when all the firing stopped at 11 o’clock, 11th day of the 11th month in the year of our Lord 1918.

Well, censorship has been lifted to a certain extend I will write you something about our last and dreadful drive . . . on the Argonne front. We started on September 26 and were relieved October 1. It was six days of what one can call h—.

The first day was not so hot, but after that we had some hard fighting.  It was the second day my school chum was killed.

We slept in the rain and mud and water and night, and was glad for such a place . . . artillery fire all the time . . ..Many a time shells hit so close to practically cover me with dirt.

When on the fifth day we saw the relief  coming over the hill, it was a grand and glorious feeling . . . we had not washed or shaved or had our shoes off for six days and nights, and dug many a hole for protection against the machine gun fire.

I got some gas . . . but soon got over it.  It affects ones eyes and lungs mostly.  I did not get any German souvenirs, for I did not have time; I thought I’d be souvenir enough.

Note: Deschner does not list the name of the chum, but it is likely that he is referring to  Loren Finnell. In a letter published on October 21, Deschner wrote”Arthur Whitesell and Loren Finnell were both killed with 15 yards of him.” 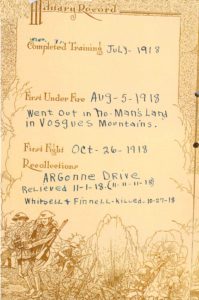 “Censorship rules have always been so strict that about all we could say was that we were well and still in the game.  Now . . I will tell what I’ve done. . .

We were at “Verdun in a section of the Argonne forest.  On September 25, we went up to the lines ready to go ‘over the top’ to take a hill that the Germans had held for four years. . . . On the third day we took the hill. . . .

The Germans were not expecting us to come up on top of the hill. We had been going for several days and nights and were all in, but we were not ready to give up.  In taking this hill we felt like new men and kept on going for two more days.  On the fifth day were were simply all in.  No sleep, rain most of the time and only very little food or water, and plenty of gas, shells and machine gun bullets.

On the 2nd of October we were back out of the lines and the sight of men was terrible.  Their clothes were nearly all torn off of them; they had a week’s growth of beard on the their faces and were mud from head to foot.  Out of 197 of our company that went up there were 83 wounded, about 19 killed and about 40 missing.

The only boys from Newton killed were Lauren Finnell and Arthur Whitesell . . . both in the same class in high school that I was.”

“I will never bid her au revoir again.”

“Believe me when I clamp eyes on that Statue of Liberty this time I will never bid her au revoir again.”

Frank P. Timmons, Harley’s brother,  also involved in the last battle, reported that Harley had been wounded “the first day of our five days’ the battle in the Argonne. . . . I don’t know just how he is getting along . . . he was not wounded seriously.”

“I woke up under the most terrific barrage that I have ever heard. It was the American guns sending their message to Fritz, and the roar was so intense that it seemed that the whole world ought to rock to and fro. . . . screaming their death songs over our heads  . . .it seemed that a thousand giants with gigantic whips in their hands were lashing the heavens with diabolical fury and intensity. . . . 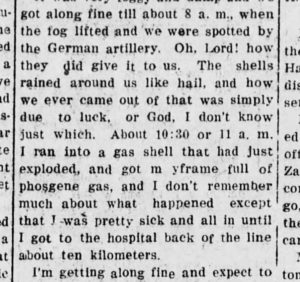 When the fog lifted and we were spotted by the German artillery.  Oh, Lord! how they did give it to us.  The shells rained around us like hail and how we ever came out of that was simply due to luck, or God, I don’t know just which.

About 10:30 or 11 a.m. I ran into a gas shell that had just exploded and got my frame full of phosgene gas, and I don’t remember much about what happened except that I was pretty sick and in until I got to the hospital  . . .”

“We Saw Our First Horrors of War” 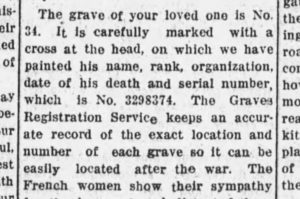 Not all the letters came from soldiers. John P. Jockinsen, chaplain 613 Trains and Military Police wrote to Mrs. L. Phares, “concerning the death and funeral of  James E. Taylor, who met death while serving with the colors overseas.”  The letter was dated October 12, 1918.

“From somewhere in France . . .  to the Nearest Relatives and Friends of James Taylor . . . as chaplain who had charge of the funeral service of the one whom you love and now mourn, and who saw him shortly before his death, it is possible that a letter from will be of some comfort to you. . . The doctors and nurses did everything in their power to save his life, but the disease that gripped him was too strong . .. We held the little funeral service from the field hospital today. . . .The grave of your loved on is No. 34. It is carefully marked with a cross at the head, on which we have painted his name, rank, organization, date of his death and serial number which is No. 3298374. . .”

James Taylor was one of five Harvey County men that died from complications related to the Influenza overseas.