The next challenge? To get to Fort Leavenworth, Kansas safely with his troops and the captured prisoners.  He needed to navigate through miles of open, uncharted prairie and  territory occupied by Confederates and Indians. 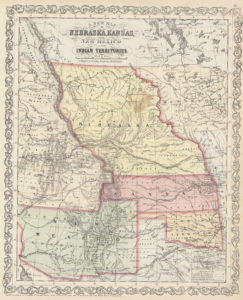 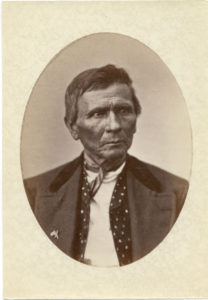 In 1861, Black Beaver was in his 50s with a successful ranch near Fort Arbuckle,  but he was no stranger to exploring new country.

Born in Belleville, Ill in 1806, the son of a Delaware chief, Capt Patterson, Black Beaver served as a guide for several expeditions including one in 1840 with famed naturalist John Audubon. Throughout the 1830s,  40s and 50s, he worked for the American Fur Company  as a scout and guide. Described as an unassuming man with a “roving disposition” Black Beaver was frequently used as an interpreter. He spoke eight Indian languages, English, French, Spanish and was adept at Indian sign language.

Both Black Beaver and Jesse Chisholm were hired as interpreter and guide for an expedition under the command of Col. Henry Dodge to the main village of the Wichita on North Fork of the Red River in the summer of 1834. During the Mexican/American war, he led a group of Indian scouts and American expeditionary forces and became known as “Captain Black Beaver.”

He was known for his truthfulness and honest dealings with everyone he met from military officers to the “wild Indians of the plains.”

“Without Map or Chart”

At the opening of the Civil War, Black Beaver was focused on ranching. However, Col Emory “appealed to Black Beaver as a guide in an effort to extricate . . . the garrisons.”  Black Beaver was reluctant to leave his farm with “considerable stock” a few miles from Ft Cobb. He feared without his presence, the farm would “fall into the hands of the enemy and be lost to him.” Emory promised “the government would fully recompense him for any losses.” So, he agreed.

Ancient Native American Trails have been discovered all over the city of Newton. One runs just west of Main from 1st street to 10th street where it joins another trail  leading to a spot near Sand Creek where several trails come together.  Other trails meet at a spot where the Ash Street Bridge is located today. Most of these trails remain unnamed or indicated on maps a “Indian Trail.”

The Black Beaver/Col. Emory Trail  was a significant  north/south route through Sedgwick, Harvey and Marion Counties and pre-dates the Chisholm Trail. In fact, Black Beaver would later suggest this route to his friend Jesse Chisholm. 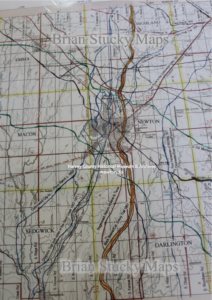 The trail exits Harvey County at Spencer Rd and the Marion County line.

The maps, created by Brian Stucky, of the trails in Harvey County  are available to study at the HCHM Archives, Newton, Ks.

Part 2 of this series on Black Beaver will focus on his return home.