From Gettysburg to Sedgwick: The Adventures of Charles Schaefer Part 2

Originally posted on Thursday, January 17, 2013 at From Gettysburg to Sedgwick: The Adventures of Charles Schaefer.

Before settling in south central Kansas in the future town of Sedgwick, Charles Schaefer led an interesting life.  At the age of ten he left home and became a part of the frontier army at Fort Leavenworth and traveled throughout the territory as a scout.  For part 1 Successful Plainsman and Scout. For more adventures of Schaefer see Buried Secrets.

“In 1858 he went to San Antonia and there identified himself with the U.S. army as a scout, serving at Fort Clark, Ringold Barracks, and Brownsville; being at the latter place when the civil war broke out.  Knowing the officers on both sides so well he hesitated for sometime whether to cast his lot with the North or the South.  the question as to the right of a state to secede from the Union was the deciding factor and he enlisted October 16, 1860 in Company E 3rd U.S. Infantry, drawing his first uniform from the Alamo.” (“Autobiography” by Charles Schaefer)

Seventeen year old Schaefer spent the first year of the Civil War at Fort Pickens, Florida.  From there he went to the Army of the Potomac where he served the rest of the war, participating in most of the important battles of that region” under the command of General Fitz John Porter.  Schaefer was wounded in the knee at Gettysburg.

“Dramatic Highlight of the Civil War”

The orders were not to fire, unless fired upon.  According to Schaefer, that order saved the life of General Robert E. Lee and prolonged the war.  Schaefer recounted the story for a newspaper reporter years later.

Standing behind a shock of newly cut wheat in a field near Gettysburg, Pa., a blue-coated man, age 20, leveled his rifle across the shock and took careful aim at the heart of a grey-coated man with stars on his shoulder and gold braid on his black slouch hat.

“But I must,” answered the lad with a ‘bead’ on the grey-coated man.  “That is General Lee.  He used to be in San Antonio when I enlisted there and so I know him.  Let me kill him.  It will end the war.”

But  the officer in charge of the blue-coated reconnoitering party was obdurate  . . So rather than disobey the order of his superior, Charles Schaefer . . . put up his weapon and Lee passed on without knowing how near he came to death.”  (Undated Clipping “Sedgwick Vet Once Had ‘bead’ on Rob’t E. Lee” in the Charles Schaefer File, Sedgwick Historical Museum, Sedgwick, Ks)

This was one of several stories that Schaefer would later tell about his experiences during the Civil War.  Schaefer mustered out in 1865, but reenlisted to serve as Post Quartermaster at Forts Harper and Zarah until 1869.  He was recognized for his service at Gettysburg in 1913, when each veteran was presented with a bronze metal cast from metal of cannons used during the war.

He married Maria Theresa Rivallissa from New Mexico, in approximately 1868 and they decided to establish a more permanent home.

In 1869, Charles Shaefer brought his bride to a place he had explored before while traveling with Col. Fauntleroy in the 1850s and again in 1860.  A place he remembered as a place of great beauty – the region near the convergence of the Big and Little Arkansas Rivers in south central Kansas.
Schaefer wrote:

“and as he again came into the valleys of the Little & Big Arkansas rivers, his keen vision and clear memory spotted again the characteristic view that had as first so impressed him.  I have already spoken of the fact that the only break in the broad monotony of prairie grass was the green made by the river trees.  South of the present site of Wichita a few miles was a  very thickly wooded place in the long line of green that marked the river.  This looked perfectly round from a  distance, and could be seen for miles.  El bosque Redondo, the Mexicans called it, and according to their tradition it had been known for years.     (“Autobiography” by Charles Schaefer)

Schaefer settled with his family on a ranch approximately four miles west what would become the City of Sedgwick in 1869.  He operated a supply store and engaged in raising cattle for a few years.  By the early 1870s, the Schaefer family had moved to the town of Sedgwick to open a grain and mercantile business with another early pioneer, William Finn.

Charles and Maria’s second child, a daughter named Rosa, was born August 12, 1870 and  was the first white child born in what would become Harvey County.  The Schaefer’s had five children; Charles G., Rosa A., Esia J., John F. and Earl.  Maria died April 28, 1885 at the age of 43.  It was noted that “she was an early community worker and was loved by all — she helped many people.”
Five years later, Schaefer married Mary Francis Wilkin of Sedgwick.  According to Schaefer she “proved a most gentle and efficient mother to the bereaved children.” She died in 1924 at age 75. 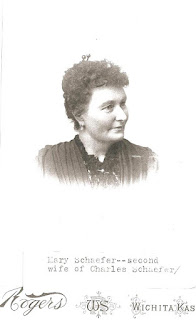 In 1874, Schaefer was again called on to serve his state.  Deputized by Kansas Governor Thomas A Osborne on July 15, 1874, Schaefer was charged with the responsibility to “raise a company of men to stop the Indian depredations that threatened the countryside.”

Gov. Osborne organized the Kansas State Guards in response to Indian raids in western and southern Kansas mostly concentrated near Medicine Lodge, Ks. By the close of 1874, the Harvey County Militia was disbanded.

Schaefer continued in public life when he served as Deputy Register of Deeds for Sedgwick County from 1888-1892.  During this time the Schaefers lived in Wichita, Ks.
In 1892, President Cleveland appointed Schaefer Consul to Vera Cruz, Mexico.  He spoke fluent Spanish “and made a good record in diplomatic corps.”  He held this position for five years.
In 1897, he returned to Sedgwick where he took an active part in civic improvements until his death January 7, 1934 at the age of 92.