Their names are printed in small letters at the bottom of the photograph or on the back. They are the forgotten recorders of history – photographers.  Glancing through Harvey County photos, studio names begin to be familiar – Tripp, Langan, Murphy, and Cox.

Today, we snap a photo with our phone – sometimes we keep the image others like with snapchat it is gone after a few minutes – we take photos for granted.

However, when photography was new, having your photo taken by a photographer was an event. Casual photographs were rare and often a person only had one or two photos taken throughout their life.  Local photographers also took photos of buildings, providing us with a valuable record of buildings landmarks that are gone or so altered it is difficult to see the original. 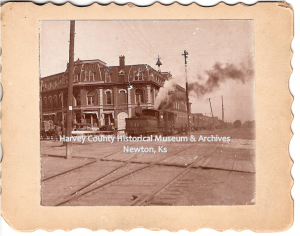 Harvey County had several early photographers including Charles L. Gillingham followed by  Frank D. Tripp in Newton, Ks. While Tripp may be the more recognized name, he was not the only photographer of early Newton. From 1887 to 1897, Tripp’s main rival seems to have been a  man by the name of William E. Langan. 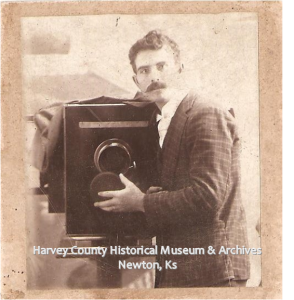 Once in Newton, Langan quickly set up a studio in the Hamill Block at the corner of 5th and Main Street (116 W. 5th) in Newton. 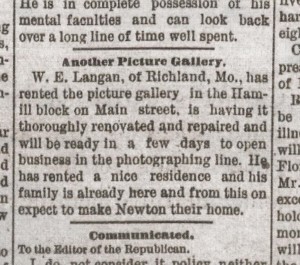 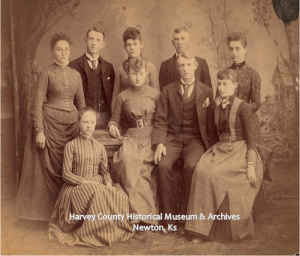 Two years later, an open letter probably written by Langan in the Newton Daily Republican stated that Langan’s Studio was one “of the best galleries in the state.” With low prices, new scenery and the only ground floor gallery in the county, the anonymous writer declared that Langan was “turning out some beautiful work.” 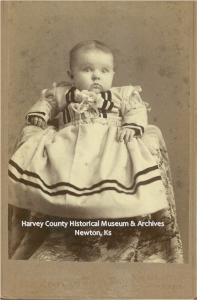 “Tripp has nothing to do with my gallery, don’t forget that.”

Two years later, a rivalry had developed between the two Newton photograph studios of Frank D. Tripp and W.E. Langan. 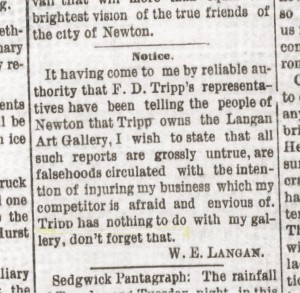 Langan responded to Tripp’s accusation in a letter published in the Newton Daily Republican, that his gallery was not making “any’ Cheap John’ pictures,” rather he was “doing to much work and had  too many orders.” Business was good. Langan noted that he had “orders from Moundridge, Hesston, Burrton, Halstead and all surrounding towns for our genuine crayon portraits.” Langan continued to expand, adding on to his business on west 5th street  to include a “printing room” in November 1889. 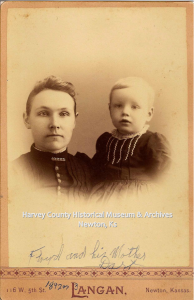 A year later, Langan was commissioned to take the photos for the NHS Class of 1890. The rivalry between the two studios was clear. The feud produced several pointed articles in the Newton Daily Republican during June 1890.

In one, Tripp accused Langan of producing cheap work and trying

“to establish himself by raving at me and slandering my work.  I have let him have his own way, for I knew the man and his capabilities, etc.,  and thought to give him rope and would hang himself. . . I am doing first class work . . . and he can’t bulldoze this intelligent community. . . I am paying my debts out of my self sustaining gallery.” 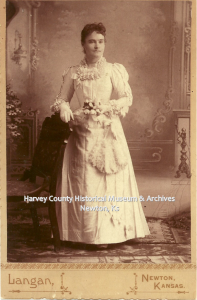 The next day Langan responded, encouraging readers to

“consider the source. Everybody knows that every word of it is false, as are all his attacks against the gallery . . . Don’t be discouraged. I am not going to write a whole column of vile epithets; he is not worth it and I have not got time. . . Everybody goes to Langan’s for GOOD photographs.” 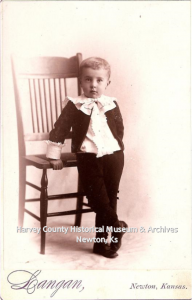 After trading insults in the Newton Daily Republican, the two must have come to a truce as nothing more could be found in the paper at this time.

In 1895, Langan remodeled his studio with new floors, coat of paint and the “latest designs in wallpaper.”  The result was “very cheerful and a real art gallery.”

A violent wind storm struck Newton in August 1895, damaging many businesses.  Newton’s photographers “were the heaviest losers.  F.D. Tripp, W.E. Langan and U.T. McDaniels lost their windows and will suffer from the thorough wetting their studios received.” 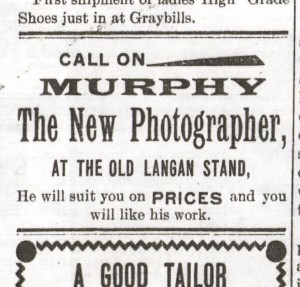 Langan sold  his studio to W.R. Murphy 10 August 1897 and moved to Nevada, Missouri with his family. Tripp left the Newton area roughly three years later between 1900 and 1903. 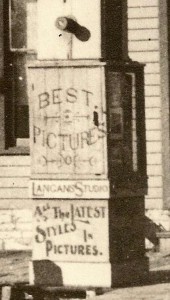 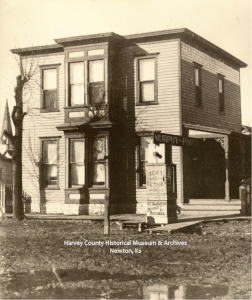 The 1900-01 Nevada City Directory listed Langan’s Studio at 107 1/2 N. Main, Nevada, MO. The report back to his friends in Newton was that he was “well pleased with his new location, stating that it is one of the most progressive cities in Missouri.“

On June 11, 1904, tragedy struck the Langan family when the oldest son, Vincent, “was run over and instantly killed by a Missouri Pacific passenger train” in front of the depot in Bartlesville, Indian Territory. He had attempted to board a train and was thrown under the next to last coach. In a strange twist, another son, Leo, died in “an accidental fall from a box car” while working, ten years later, on August 3, 1914.

William E. Langan may have died before 1914, as only Mrs. W.E. Langan was listed on the Death Certificate for Leo Langan. The 1920 U.S. Census listed Emma as a widow. No other information could be found at this time on W.E. Langan, creator of “artistic photography” in Newton, Kansas for roughly ten years. Emma died August 13, 1958 at the age of 90 in Kansas City, Missouri.

Additional information on people in photographs: