With the notice that Alexander Jewelry will be closing January 1, 2017, we thought it might be fun to look back at the businesses that have been located at 613 N. Main, Newton.

Which one did you shop at?

By 1885, J. F. McGrath had a grocery business at 613 N. Main. Upstairs at 613 1/2 N. Main, Dr. N. Monday provided dental services and W.M. Morris had a tailor shop.  In 1887, the Bretch Bros had taken over the grocery and several dressmakers operated from the location on the ground floor and second story.  The dressmakers included, Miss Mary O’Keefe, Mrs. M.E. Brooks and Miss Ida Gibson. 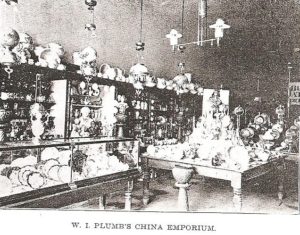 He carried “the most complete  stock of crockery and china ware, comprising the latest and most artistic handicraft of the . . . art potteries of Europe and America.”  The Emporium was “tastefully arranged and a more attractive show windows are seen in the city.” By 1915, Plumb’s Emporium had moved to 502-504 Main. 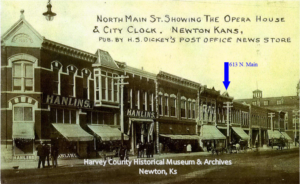 Between 1905 and 1913, several different businesses used the space from  Mildred Coleman, a hair dresser, to the Davis Novelty Store. 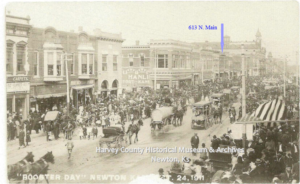 Hogan’s A Little Bit of Everything

Born in Abilene, Ks, September 1883, to Irish immigrants, Richard L. ‘Dick’ Hogan spent several years as a traveling salesman in Kansas. In February 1913, he moved his family to Newton, Ks and went into business with J. G. Bremmer.  They bought the business at 613 N. Main from S.A. Davis for $1,500. 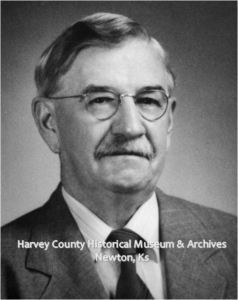 In 1915,  Hogan installed a new  store front on the building at 613 N. Main.   The editor for the Evening Kansan Republican described the new front as “strictly modern in every respect, with closed backs, plate glass fronts and prism glass at the top.” The article concluded that this would “greatly improve the looks of that block.” 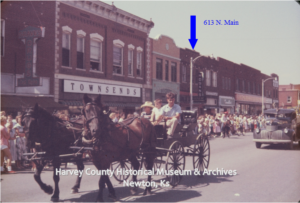 Hogan enjoyed “remarkable success” and by 1919 was able to buy out his partner.  In the early 1920s, Hogan established similar stores in Herington and Peabody, Ks. He also expanded the Newton store to the alley.  The business was valued at $20,000 in 1922. 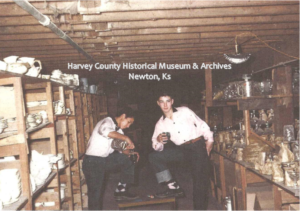 Basement of 613 N. Main, 1955. Dick Hogan & Fred Martinez after cleaning the storage room enjoying a drink from the Fostoria glasses.

Over  40 years, Hogan would run a successful business as well as serve as “the city’s No. 1 booster.” He worked with various groups from the Harvey County Red Cross to Bethel College to raise money for community projects. He served on the city commission in 1949-1953 and was mayor for one year. 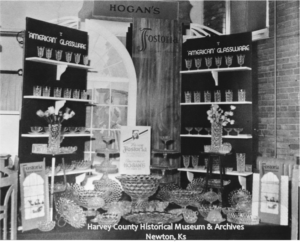 At the time of his unexpected death, Dick Hogan, a devout Catholic, was focusing his energies on raising funds for “a new church for Mexican members of the Catholic faith.”

Hogan died of a heart attack 17 February 1955.  He was 71 and was survived by his wife, Jeanette; sons, Morris and Pat R. and daughters, Katherine Gilchrist, Betty Torline, Marian Snider, Julia Hoffman, Barbara Hanlon.  One son, Lt. Robert L.  Hogan was killed in action during WWII. 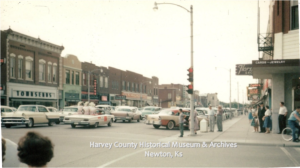 His son, Morris, took over the business and continued to provide the community with “a little bit of everything.” 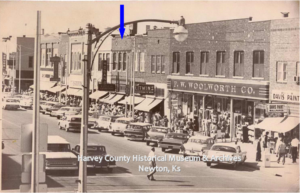 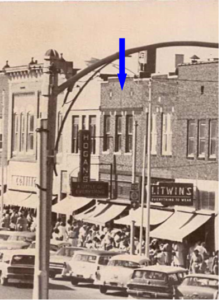 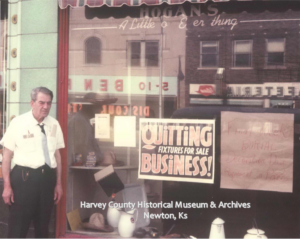 Moffatt’s Jewelry was owned and operated by Harry L and Unilda Bestvater Moffatt. 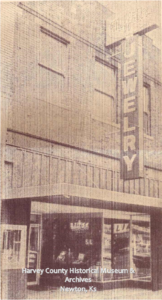 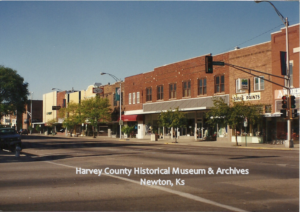 The store continued as a jewelry store under the ownership of Parker Exposito.  Alexander’s Jewelry will close January 1, 2017. 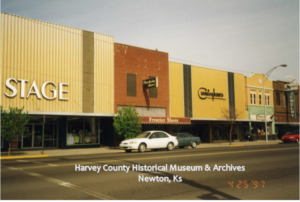 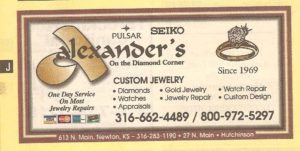 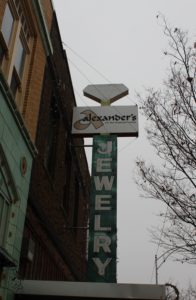 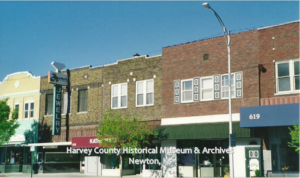 There were several stores in Newton known as “racket stores,” including one associated with Hanlin Merchantile Co.  Hogan’s was initially called “The Racket.” 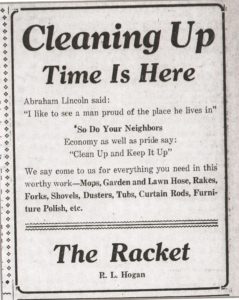 In 1908, the Evening Kansan Republican provided a description of these stores.  The term,  “Racket Store,” was used in commercial circles to describe 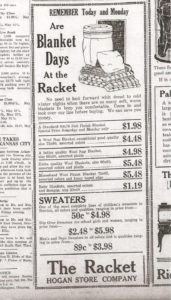 Norm’s Coffee will move to the store.