Shoulder a Musket and Go to Battle!

“Shoulder a Musket and Go to Battle”

Most of the pensions in the John C. Johnston Civil War Pension Collection are from men active in the Civil War. However, some men participated in an earlier war which was also related to the same issues.  One of these men was Ichabod Chase.

In 1846-1848 the Mexican American War was the focus of the slave/anti slave state debate.  During that time the debate centered around Texas and whether slavery should be extended to the state. This cause further trouble with establishing the border between Mexico and the United States. Ichabod Chase’s Pension Papers  reveal that he   enlisted on December 1, 1847 “the serve during the war with the Mexicans.” From a brief newspaper announcement and a note in his pension file, also indicate that Ichabod participated in this war.  He was discharged in July 1848 and returned to Michigan to start his family.

In the case of Ichabod Chase, more is learned about him and his life through his wife and her obituary. Born in 1834, Ichabod married eighteen year old Margaret Gillam shortly after he returned from the Mexican American War in 1848.   The young couple was adventurous and went further west in Michigan and secured government land open for settlement.

“They braved the wilds and hardships of pioneer life and three little ones had been added to their home” when the “unsettled question of slavery rose hydra-headed, and a call . . . to leave his young family, shoulder a musket and go to battle.”

Ichabod  enlisted again as a private for the Union army on August 25, 1861 and was gone from his family until August 1864.

These were difficult years for the young family. Margaret’s obituary described this time during the Civil War.

“Only those who lived thru the eventful time can realize the valor and heroism of the man on the field of battle and the fortitude and endurance of the woman in the home. Mrs. Chase with her little children lived on the Michigan farm, while her husband was gone to war, doing the work perhaps of two with the dominant buoyant spirit that then and thereafter lifted her above adverse circumstances.”

The Call of the West!

Following the war, the Ichabod and Margaret owned a mercantile business in central Michigan, but soon they felt another call . . .”the Call of the West!” With the opportunity to acquire cheap land in Kansas, the Chase family came to Harvey County in 1874 and settled north of Burrton, just missing the “grasshopper scourge.” Ichabod took a position as the Superintendent of the bridge and building department for the Santa Fe Railroad in 1878.

In April 1895, as a widow, Margaret applied for a “Veteran’s Bounty” and was notified at that time that “claims had been paid at time of service.”

In 1916, shortly before her death Margaret again applied for a widows pension. 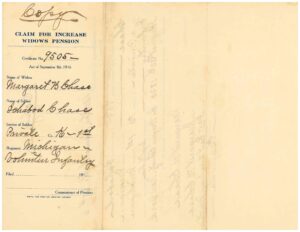 It is not clear if Ichabod or Margaret Chase ever received a pension for his time serving in either war.

After Ichabod passed away in 1893, Margaret moved back to Newton to live with her daughter, Lucene Chase Axtell.

“Having experienced the bitterness of war, she was keenly sensitive to the cause and consequences of the World War and express a hope that she might live to see Peace restored to the nations of the earth, hoping that peace would come before our boys were called into actual battle. “