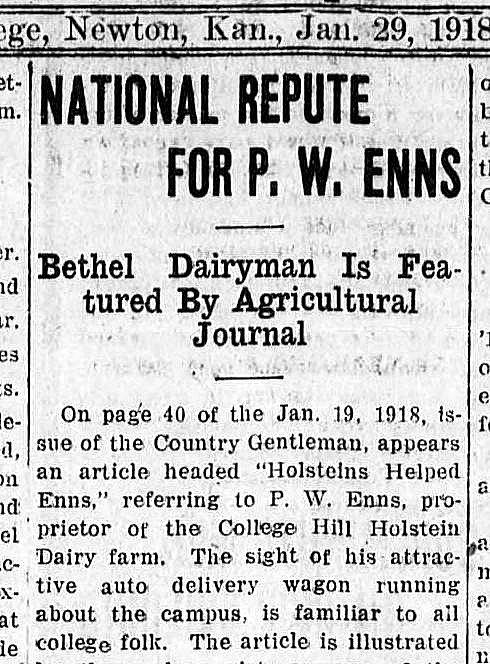 P.W. Enns and College Hill Holstein Dairy Farm. In 1918, Enns gained national recognition for his dairy. The Country Gentleman noted, “P.W. Enns of Harvey County Kansas is the boss dairyman of Kansas. At least that is what the public press proclaimed him when he was elected president of the Kansas Dairy association. Mr. Enns also is director of the Harvey County Farm bureau, president of the Farmers’ Institute, dairyman, Holstein breeder and a booster for Kansas and America in general.” Mr. Enns gave this explanation of why he changed from general farming to dairying: “I lived in Oklahoma when butter sold at 4 cents a pound, eggs at 3½ cents a dozen; and mighty few purchasers of this farm produce even at those figures. I had five cows, a few hens, lots of courage and the ambition to succeed in farming. I weathered the period of low prices and hard times when the majority of my neighbors who were grain farming failed, mainly because I stuck to my cows.” Milk from College Hill dairy went to supply a local hospital, a local restaurant, and Bethel College. Source: The Evening Kansan Republican. Tuesday, Jan 29, 1918.