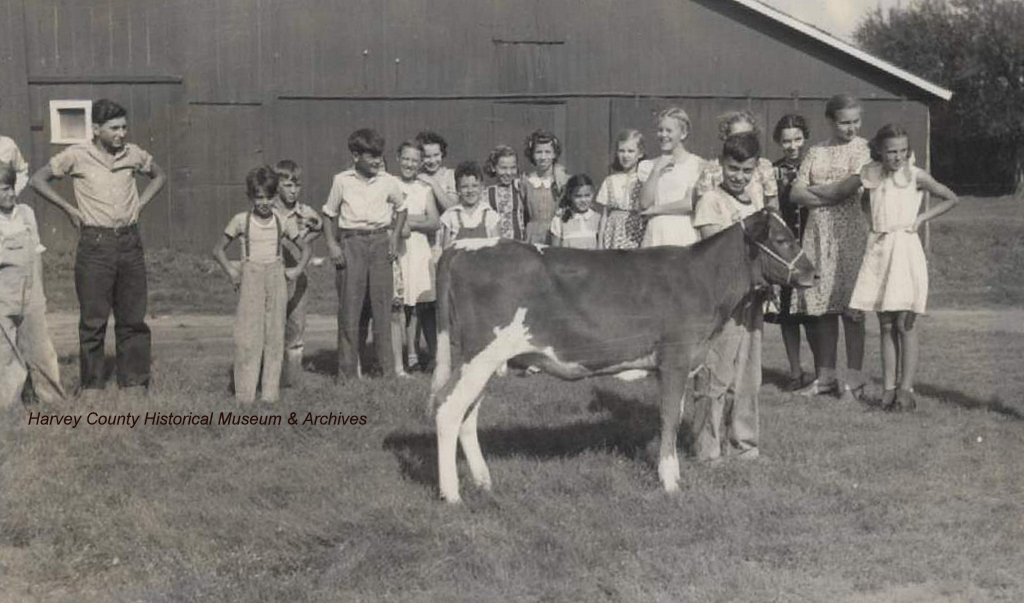 Dairies in Harvey County. While it’s true the raising and harvesting of crops has been very prominent in Harvey County’s agriculture, dairy farms have been a key element. They provided diversification for the county’s economy. Hershberger Dairy, located south of Zimmerdale, operated from 1929 to 1954. It developed a registered and well known Guernsey line of dairy cattle. Zarnowski Dairy, in northwest Newton, started in 1918. Over a 40 year span, the family developed a nationally outstanding herd of Holstein dairy cattle. Lottie Gradert and Phillip Peter Sauerwein established a dairy in the late 1870s on a farm west of Walton. In 1941, their grandsons took over the dairy herd of about 18 and enlarged it to 225 cows and heifers. Notable in the North Newton area were College Hill Holstein Dairy Farm of P.W. Enns, High View Farm of Mrs. Daniel G. Koppes and Tangeman Dairy of Fred Tangeman. On the south side of Newton was the Spencer Dairy. Photo: HCHM Collection. Note: Selected from the collection of Harvey County Extension office documents and photos of the 1920s and 1930s which are housed at HCHM, this photo shows the Hesston Union Champions 4-H club listening to a demonstration at the Hershberger dairy.