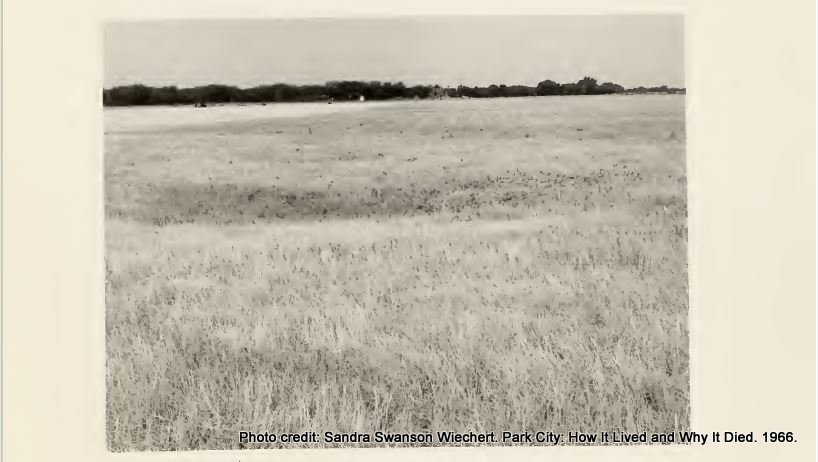 (J) Four Horsemen of Wichita, 1871 (Clearwater-Wichita-Florence Trail) – concluded. For the Park City to Ellsworth scheme to work, a new trail, a new town and new cattle loading facilities would need to be in place at the Park City site for the 1871 cattle season. Any setbacks would open the door to the AT&SF and Wichita. For its part, the AT&SF was not sitting idle. It rapidly pushed west with the goal of completing its rail line to a site on the cattle trail which was 25 miles north of Wichita. After that, the railroad planned to go straight west which meant the AT&SF would not dip southwest to Park City. Thus, the K.P.R. – Park City alliance could be a turning point. If it failed and cattle herds continued through Wichita, Park City would have neither a railroad nor the Texas cattle trade. Trying to tip the scales toward the K.P.R.–Park City alliance, Maj. Shanklin (K.P.R. agent from Ellsworth) met the first herds of the 1871 season at the Red River and guided them north. As the herds reached today’s Clearwater (KS), a farm dweller learned of Shanklin’s plan to divert herds to the new Park City –to–Ellsworth trail and rode into Wichita with the news. It was quickly decided to have N.A. English, Mike Meagher, J.M. Steele and James R. Meade approach and redirect the drovers through Wichita. Park City’s death knell began to toll when the “Four Horsemen” intercepted the herd west of Wichita and convinced the trail boss to use the trail going through Wichita. Also, the Four Horsemen had drovers sign a statement saying Wichita was the shortest and best route – and then distributed circulars all the way to the Red River. The result was the creation of the Four Horsemen Trail as cattle herds made their way north from Wichita. Leaving the Abilene/Chisholm Trail and going through today’s Harvey County, the herds were driven northeast to Florence – then the AT&SF shipping terminal – since the Newton railhead was not established until July of 1871. 1964 photo. West edge of Park City townsite looking toward Vincent J. Keeler residence. The depression was once a dugout.