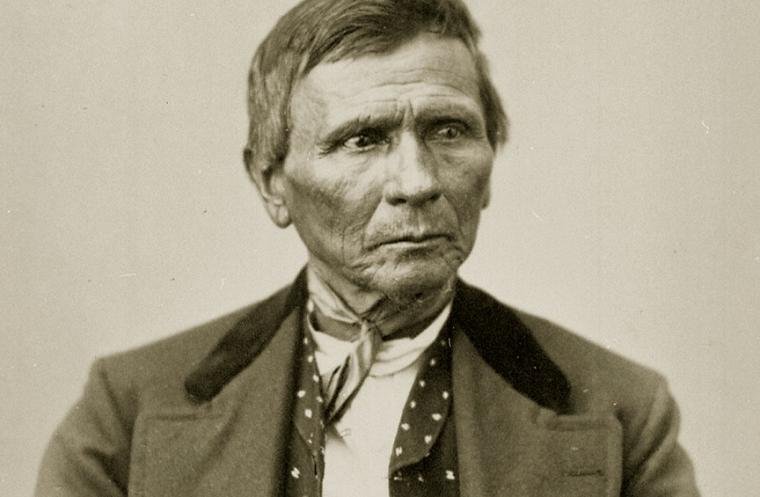 Black Beaver or Suck-tum-mah-kway (1806—1880, Delaware tribe). Born in western Illinois, Black Beaver was from the Delaware (aka Lenape) tribe which was originally a Mid-Atlantic coastal people. The Delaware were relentlessly uprooted and forced to move west through Ohio, Indiana, Missouri, Arkansas, Texas, Indian Territory and Kansas. However, they had a long history of allegiance to the U.S. government. As a teenager, Black Beaver trapped and traded beaver pelts for John Jacob Astor’s American Fur Company. When the fur trade declined, Black Beaver turned to guiding wagon trains westward. He became one of the most accomplished Native American scouts in North America. He developed his skills as an interpreter, guide, mediator and scout so successfully that his travels and assignments took him to the headwaters of the Missouri River and Columbia River, south to the Colorado River and Gila River and to the shores of the Pacific in southern California. Having lived for a number of years in I.T., he was well acquainted with the Great Plains. Black Beaver spoke English, French, Spanish and eight Indian languages. He could use Plains Indians sign language. He knew how to get around or over obstacles in the terrain, how to determine the easiest crossings of rivers and streams, how to find abundant grass for livestock and how to locate dependable water sources. Photo courtesy National Archives, photo no. 75-ID-118A.