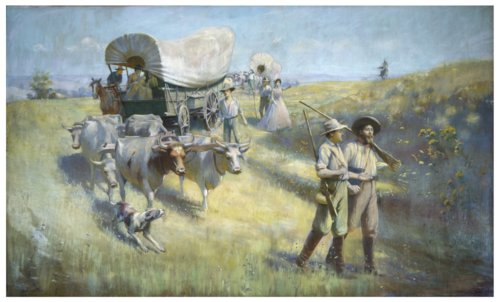 Harvey County – Crossroads of Local and Immigrant Trails. There were numerous local and immigrant trails. A few appear to have been connections between homesteads. An undated trail was the split from the Cherokee Trail which went to the Zimmerdale area (located between the present-day cities of Newton and Hesston). “Geary’s Ranch,” located near today’s Moundridge (in McPherson County), was on an 1868-1871 “trail used by travelers between Abilene…and Indian territory.” Roughly, the trail came from the south to Newton-Hesston-Moundridge and then north. The Cottonwood City to Perry Ranch Trail of 1869 may have been one of the first paths out of the Cottonwood/Doyle Valley which went to Sand Creek. In 1869, George F. Perry established a cattle ranch at the joining of the Emma Creek and the Little Arkansas River. This was one of the earliest settlements in the area. Note: Located near today’s Cedar Point (in Chase County), Cottonwood City vanished long ago. The 1870 Irish Trail to Garden Twp (in Harvey County) was used by the F.P. and A.E. Munch families. Also, in 1870, was a trail used by a French group to settle in Alta Twp (in Harvey County). Via an 1873 split from the Cherokee Trail, French Canadian immigrants used the Elivon Trail to populate their settlement called Elivon. Located just inside McPherson County and north of today’s Hesston, Elivon developed into a post office, store, church, cemetery, blacksmith shop and school. When a railroad was built three miles to the south, Elivon dissolved. As the settlers scattered, some of them played a part in Hesston’s emergence as a town. The 1874 Peabody to Grace Hill Church Trail was traversed by a group of Mennonite Christians from Prussia. From Peabody (in Marion County), they crossed Doyle Creek and into Pleasant Twp (in Harvey County). An 1874 Halstead to Hopefield Trail was key to a group of Swiss Mennonite Christians from a Russian province. Leaving the train at Halstead (in Harvey County), they used the Fort Harker Trail to reach an immigrant house west of today’s Moundridge (in McPherson County). Photo credit: https://www.kansasmemory.org/item/305986 2/28/2019.