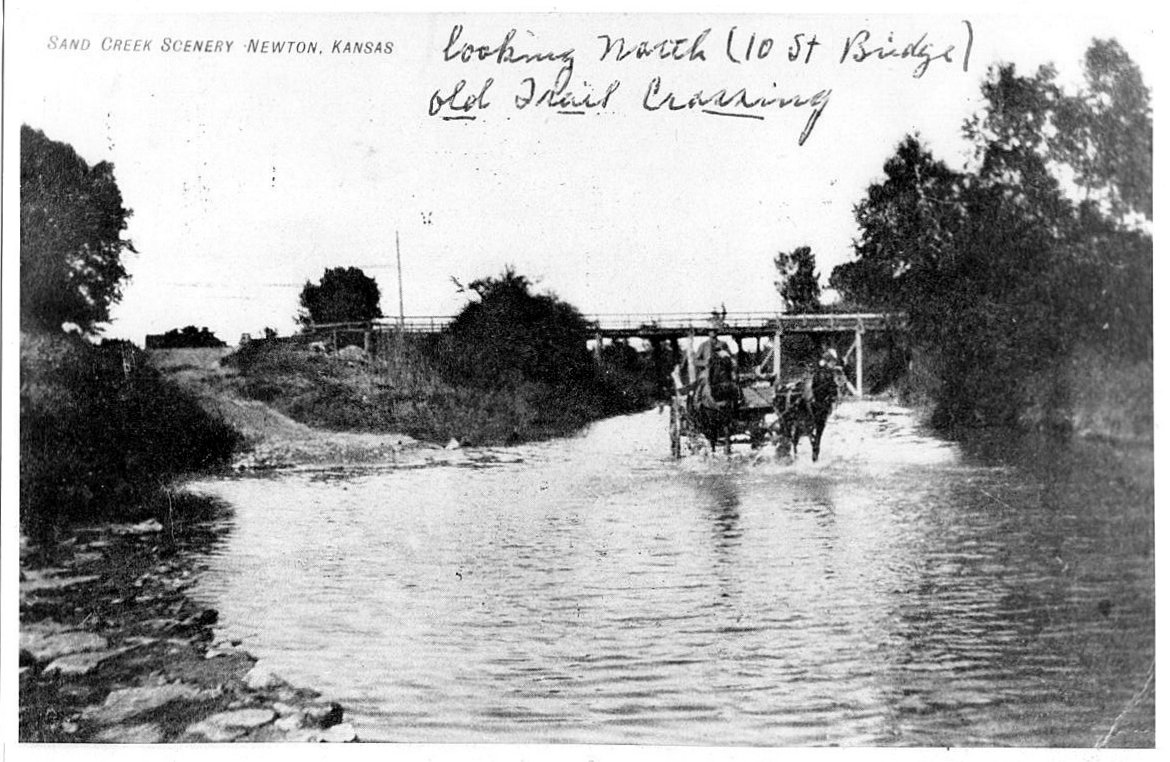 Grand Central Station for Trails – Sand Creek at Ninth and Plum in Newton. The Sand Creek crossing in Newton at Ninth and Plum streets was one of the most significant trail sites. It could be said the Sand Creek Crossing was like “Grand Central Station.” The rock bottom made for an easy creek crossing. The site was used by Indian trails and the Abilene/Chisholm Trail, making it the longest used and most heavily traveled site in present day Harvey County. Cattle, horses, chuck wagons, stage coaches and supply wagons crossed here on the way to Abilene, Kansas between 1867 and 1871. 600,000 cattle were trailed to Kansas in 1871, but not all went via the future site of Newton. Several trails were used for herding cattle to the rail heads at cow towns and did not traverse present-day Harvey County. Some herds went on the Middle Shawnee Trail to Baxter Springs, Kansas. Others used the West Shawnee Trail to Junction City, Kansas. Another route used the Shawnee Arbuckle Trail which joined the Abilene/Chisholm Trail in Indian Territory (I.T.) and went north through present-day Newton. Note 1: The rock bottom at the Sand Creek crossing is now gone. Following the devastating flood of 1965, a project to widen and deepen Sand Creek in Newton was undertaken by the U.S. Corps of Engineers. Local historian Dr. Gil Michel witnessed the construction equipment breaking through and destroying the layer of rock which had made this an ideal creek crossing. Note 2: Viewed by looking north at the old 10th Street bridge, the “Old Trail Crossing” goes to the left or west of the bridge. Photo credit: Undated. Collection of Dr. Gil Michel.