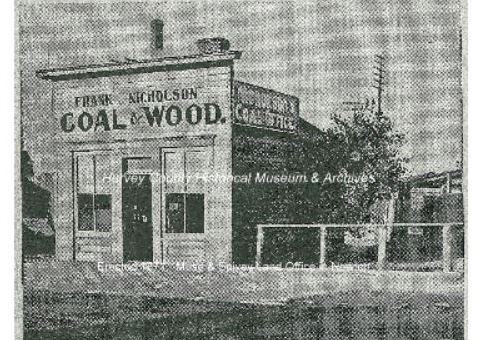 Land Office of Muse, Spivey & Co., regional agents for “railroad land.” Erected in 1871 at a location in Newton’s 600 block of Main Street, this wood frame building was moved to 311 Main in 1878 or 1880. Muse, Spivey & Co. operated from this building as regional agents for the sale of “railroad land.” For homesteaders wanting to acquire “government land” under the Homestead Act, they went to the federal land agent office in Wichita. According to Muse, “…every township in present-day Harvey County had bona fide and permanent settlers by the spring and early summer of 1871. By January 1872, all unoccupied government land of any value in Harvey County had a filing upon it at the government land office.” The influx of people produced a scattering of towns, villages and settlements across the region. One of them was Elivon, a small community in McPherson County just north of present-day Hesston. It was established in 1871 by a group of French Canadians. Photo from HCHM collection.