“In Memoriam:” Soldiers of the Great War

In the May 19, 1919 issue of the Evening Kansan Republican the editors printed a “Report of the Committee on Memoirs at Service Held  Sunday, May 18, 1919.” In this report, Harvey County soldiers that had died during the Great War were remembered. The issue gave a brief description of each man.  The issue also included  “The Complete Roster of Harvey Co. World War Soldiers.” 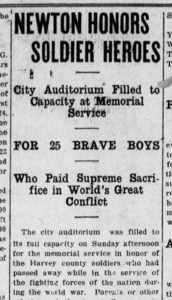 Based on the information in the newspaper article more soldiers from Harvey County died from pneumonia, than died in action, illustrating the  devastating effect of the 1918 Influenza. Six were killed in action, five others died on foreign soil, and 14 in the United States.

The  men are listed below.   In the coming year,  watch for stories of these men to mark the 100th Anniversary of the Great War.

Died of Pneumonia on Foreign Soil

Died of Pneumonia on US soil

Accidental Death on US Soil 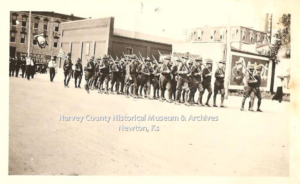