Many a Building  Stands Today Due His Skill: Pat Rickman & Joe Rickman

The 3rd in our series of posts celebrating Historic Preservation Month focusing on the people behind the buildings.

Newton in the 1880s was a booming town. Businessmen filled with optimism were constructing lavish buildings for their businesses and homes.

In most cases, we know about these men and their families or the information is fairly easy to find. The names of the architects and contractors for the building are frequently mentioned in the newspapers. But, who were the men who did the actual work of putting the stone upon stone or crafting the beautiful woodwork? Their names are harder to find.

Perhaps, the most recognized historic building in Harvey County is the Administration Building on the Bethel College Campus, N. Newton. The idea for a Mennonite College came largely from a group of  leaders, including David Goerz, in the early 1880s.  They envisioned a grand building fit for a place of higher learning.  The businessmen of Newton were also enthusiastic about the idea of a college near to town.  Little did anyone know how long it would take to finish this project. (see note at the end of post)

The Building Committee, led by David Goerz, first approached the well known architectural firm, the Varney Bros. They had designed  the Clark Hotel and the Hoag House. The excited committee met with the architects and described their desire for a splendid building on the empty Kansas prairie north of Newton. Discussions with the Varney Bros seemed to stall at one point and no usable plans were produced. The building committee regrouped and decided to go with a new Wichita firm, Proudfoot & Bird.  Ed Slater, a local man, was chosen as contractor and work began. 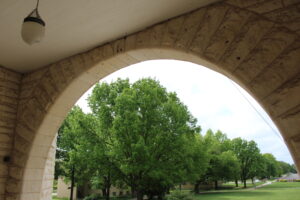 Almost everyday, young Hazel Rickman would walk across the prairie, cross Sand Creek and bring lunch to her father, Patrick Rickman.  Perhaps she sang while she walked or simply enjoyed the sound of the birds. Rickman was one of the stone masons working on the new college building. Perhaps she brought lunch for her other relative, Joe Rickman.  In later years, Hazel remembered this time fondly. 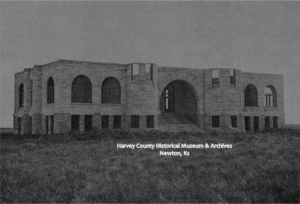 Patrick Rickman  was a well-known  craftsman in Harvey County. According to family tradition,  Rickman was the head of the construction company that employed several members of the larger Rickman/Anderson family.  To support Hazel’s memory, the Newton newspapers provide several clues that link Pat Rickman and E. Slater, the contractor for Bethel College. 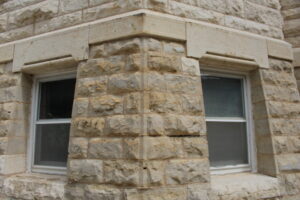 In October 1886, the Newton Daily Republican, noted that E. Slater,

“who is the mason work on the Swenson Block, ran out of stone . . . and laid off all the men but Pat Rickman.” When the shipment of stone came in, he asked the men to come back, “but they refused . . . their grievance was that Mr. Slater had kept Rickman, a colored man, at work . . .while they were laid off.” 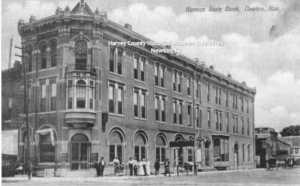 E. Slater was also the contractor for the brick and stone work for the Clark Hotel, built in 1887, and Pat Rickman was likely among the skilled laborers in the crew. 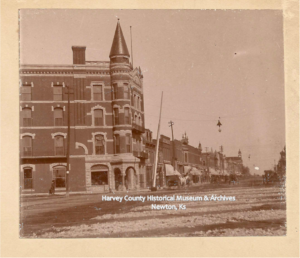 Finally, the working relationship between the two men becomes apparent when Slater testified in Rickman’s murder trial in February 1895. Ed Slater testified that Rickman worked with him often and concluded “I had always been friendly” with him.

Rickman also worked with another contractor, Ed Fox. The newspaper reported that the two worked together to repair the base blocks at the Ragsdale Opera House. Over the winter the stones had became water soaked, froze and then crumbled.

“A Great Deal of Work to be Done”

Throughout the 1880s, there was a great demand for skilled stone masons.  The editor of the Newton Daily Republican, after speaking with one of the contractors noted, “the truth is that there is a great deal of work to be done and many brick and stone masons are employed on other buildings.” The same article noted that most of the stone masons and brick layers received between $3.00 and $3.25 a day in 1886. (Newton Daily Republican 12 March 1886)

Patrick Rickman also had a crew that bricked many of Newton’s streets. 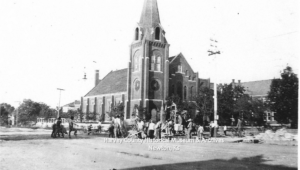 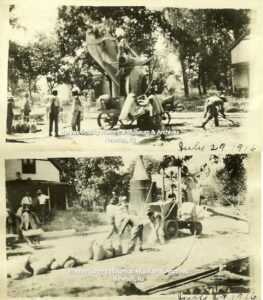 Born in White County, Tennessee on July 31, 1857, Pat came to Harvey County in 1879.  He was a skilled stone mason and brick layer and ran his own construction company. He  also participated in local politics serving as a Republican delegate for the Fourth Ward several years. 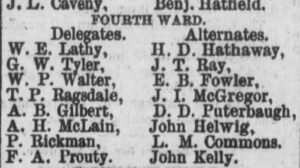 At the time of his death, Pat Rickman was “one of the best known workmen in this section, as well as one of the most dependable, respected workman.  Many a building  stands today as a monument to his skill and industry.” (Evening Kansan Republican, 25 August 1926, p. 2.)

Pat Rickman no doubt hired many of his relatives to work for him. With skilled stone masons in high demand,  Joseph C. Rickman was among those working.

Joseph Rickman was twenty-one years old when he came to Kansas with his mother, Mary Rickman Anderson, to homestead alongside his stepfather, David, sisters; America, Lucy and Tennessee, and brothers; Wayman, Jefferson, and Nathaniel.

Joe worked as a laborer and a stone mason.  According to family tradition, he helped to build several Newton landmarks including the Warkentin Mill (today known as the Old Mill). He also worked for  Pat on the Administration Building on the Bethel College Campus. It is not known what other buildings Joe might have worked on over the span of his career.
He likely was part of  Pat Rickman’s crew that  laid the bricks for Newton’s streets. 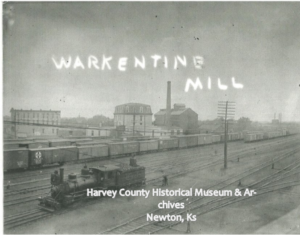 Unfortunately, Joe appears in the newspapers more frequently for fighting, usually with Arthur Childs, than for his work. His name may not appear in the newspapers for his skill as a stone mason, but  Joe Rickman was one of the many who used skill and hard work to build the city of Newton. Joseph C. “Joe” Rickman died in May 1918 at the age of 68.