Early efforts at preaching in Newton met with limited success, but one man would not be deterred. The story of Rev. M.M. Haun’s first sermon in the Gold Room Saloon has become part of Newton’s lore.

At one time, several prominent gentlemen, among whom were T. J. Peter, General Manager, and L.M. Sargent, Freight Agent of the AT&SF Railroad, looked in upon the scenes being enacted in the “Gold Room,” on a Sunday evening, in September or October, of 1871.

The building was crowded, and drinking whiskey and gambling were going on at the bar and around the small tables in the front; singing and preaching from a platform in the rear end of the building, while in another room were harlots plying their vocation or peeping through the curtains at the scenes in front.

After the religious services were over, the reverend gentleman who had conducted them was given a five dollar bill, and was induced to take a social glass, and promised to call again. Mr. Peters subsequently told the writer that it beat anything he ever heard.

The Muse story is likely one version of a story about Rev. Milton M. Hahn, a Methodist Episcopal preacher. This second account was told to a reporter by E. G. Utz, a good friend of Rev. Milton Haun, for the 12 February 1915 edition of the Evening Kansan Republican.

Utz retells the story Rev. Haun told him years before. 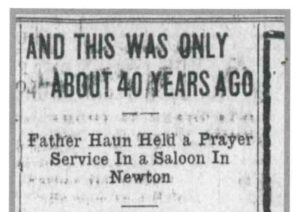 Rev. Haun was sent to Newton as a missionary in 1871 by the Methodist Episcopal Church. Since there was not a church, services were held in private homes or on street corners. Haun recalled that several people had been discussing where to hold church services when he suggested holding a service in the Redlight Saloon***. The “other good people” were not sure this was a wise choice. Rev. Haun was not disagreed.

He  asked the proprietor of a saloon for permission to hold a religious service the next day. The proprietor, the son of a Methodist preacher, gave permission and offered to bring his Methodist hymnal to help with the singing.

The next day Haun arrived at the saloon, which was crowded with men playing cards and drinking. He “selected a familiar hymn, which the proprietor and the women joined in.  Then he read a passage of scripture after which he offered a very impressive prayer.” Haun later recalled that it was so quiet at the close of the prayer “you could have heard a pin drop.” However, that must have been about all the church the cowboys felt was necessary, because as Haun recalled, “when he began to talk of Christ and Him being crucified for about twenty minutes, the men got restless and noisy.”

Haun remembered that “they asked him to have something to drink. He refused the invitation.” He was then offered a glass of lemonade. Suspicious, Haun stated he “would only drink the lemonade provided he saw it being made.” He concluded his story by noting that the proprietor walked him to the door and gave him a five dollar bill. 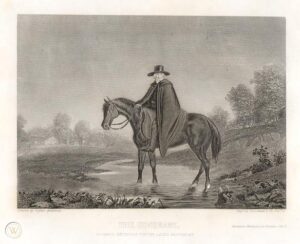 Milton Mars Haun was born November 4, 1819 in Tennessee to Abraham and Nancy Hyder Haun. In 1847, Haun converted to the Methodist Episcopal Church and a year later was granted the license to “exhort” and was appointed to the Northern Indiana Conference.

Haun was married three times. His first wife, Emaline Evans  was from Fort Wayne, IN. They married in 1852 and had two children.  He married again in 1857 to Louisianna Green. They also had two children. Sabra Josephine Palmer of Lawrence, Ks, married Haun in 1864. They had eight children, four of which lived to adulthood.

In 1856, he moved to Kansas Territory where he served as circuit preacher along the eastern border. As a circuit or itinerant preacher, Haun was assigned a geographical area and it was his responsibility to visit each church in that area at least once a year in addition to starting new churches.  Traveling across his territory on horseback, he was expected to preach everyday at any place available; homes, fields, street corners, and even in saloons. By the time he got to Newton, he was already a seasoned circuit preacher having served in the Kansas Territory since 1856.

In 1869, Haun decided to settle on a homestead in Section 10, roughly six miles southeast of Newton. His growing family joined him in 1871.  Throughout the 1870s, he served as a circuit preacher in the Valley Center and northern Sedgwick County (later Harvey County) area.

Rev. Milton Mars Haun was one of the larger than life people in Newton’s early history and is usually credited with being the first preacher to preach in wild and wicked Newton. One can imagine a fiery, confident minister walking into a saloon, singing a hymn, and leading a stunned, silent  crowd in prayer. Haun was confident in his convictions. In later descriptions, Haun was described as a “radical prohibitionist.” Those that knew Haun noted it would have been completely out of character for  Haun to drink anything other than water after his sermon in the Gold Room Saloon. Rev. Haun continued his work in the Newton/Sedgwick area until 1901, when he and Sabra moved to Los Angeles to be closer to their grow children.

“I knew this M.M. Haun well, a tall, lean, gray old man, who is still remembered by many for his long prayers and loud amens from the Amen corner.”  (Vince Marshall letter)

***All other sources indicate the Rev. Haun preached in the Gold Room Saloon, which was located in the 600 Block of Main, Newton, and was considered one of the nicer saloons in town.