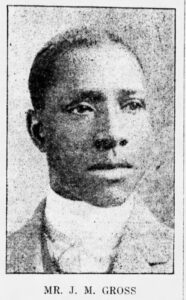 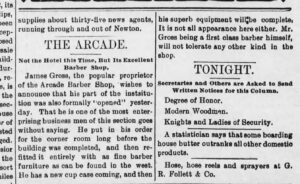 by Kristine Schmucker, HCHM Curator
Recently, we posted a photograph on facebook of a Newton Peter Pan Ice Cream Store.  The questions and memories that resulted encouraged us to look into this Harvey County business. One goal was to see where these stores were actually located and how many were there?
Our photo technician, Linda Koppes, searched our photo archives for any photo related to Peter Pan Ice Cream and then she scoured the City Directories for locations and dates. I did a bit of background research into the business and discovered that a popular business today has a direct connection to the Peter Pan Stores of the 1960s and 70s.
The Hotel Meridian (two story brick building in the photo) was located at 123 N. Main and housed a Peter Pan Ice Cream Store on the street level from approximately 1956 to 1966.  Other businesses from south to north included the Gail Ward Used Car lot (117); Russell’s Furniture (121); Peter Pan Ice Cream Store (123); Meridian Hotel (123 1/2); Miller’s Sinclair Service Station (127).  Signs for the Meridian Hotel and Coca Cola are visible on the north wall of the building.  These buildings were town down in approximately 1970.
From 1973 to 1979 a Peter Pan Ice Cream Store was located at 127 N. Main.  In 1980, it became the Pancake Hut and then in 1984 the Dairy Queen.  The Dairy Queen was torn down in August 2012.

In addition, there was a store located in the Pop Shoppe at 104 W. 1st.

In 1967, the 61 Peter Pan Ice Cream Stores were sold to a large wholesaler.  The sale did not include the Braum Dairy or processing plant.  As a condition of the sale, the Braums were not allowed to sell ice cream in Kansas for 10 years. Bill moved the business to Oklahoma City, OK and in 1968 opened the first Braum’s Ice Cream & Dairy Store.  Today the Braum family owns and operates nearly 300 stores located in Oklahoma, Kansas, Texas, Missouri and Arkansas including one here in Newton.

Where did the name Peter Pan come from?
Braum got the name ‘Peter Pan’ after the Emporia Park.

How the park got it’s name is also interesting.  Mary White, the young daughter of Emporia’s William Allen White died of injuries sustained while horse-back riding.  White writes an editorial about her life and funeral.  In the article, White refers to his daughter as a “Peter Pan”, a girl who did not want to grow up. The article was widely published.  Contributions were given to the White family in Mary’s honor.  The Whites decide to use the money to build a park in Emporia.  The Park was named the Peter Pan Park after the young, energetic Mary White.
You can read the story of Mary White in a book written by museum volunteer and former board member, Bev Buller.

When I was working on the exhibit Up the Beaten Path: Following the Chisholm Trail I ran across a short remembrance of the cattle trade in Harvey County that became one of my favorite stories.

Cornie R. (Royston) Reese (Mrs. John C.) recorded a brief story she had been told when she was a young girl growing up in Harvey County.

“The cow boys used to drive the cattle to Newton and let them browse along Sand Creek  while they would go to the gambling houses and saloons.  Mrs.O.B. Hildreth lived upon the hill over looking the cattle crossing of Sand Creek.  She said those roving cattle would devour her garden.  So, one day, she went out on her porch and yelled as loud as she could waving a red table cloth – she stampeded the herd and they ended up in Abilene.”

Mrs. Hildreth had spunk! I wondered what else I could find out about her.

In the spring of 1870, twenty-seven year old O. B. Hildreth, a Civil War veteran, arrived in Kansas.  He located on a quarter section of land in Darlington township.  A year later, he sent for his wife, Mary.  According to Mary’s obituary, “she came to Newton in April 1871 with her baby Harriet in her arms, to meet her soldier husband.”  Just getting to her new home was an adventure.  The Santa Fe Railroad had not yet completed the line to Newton, so Hildreth met his wife at Cottonwood Falls, “and they came the rest of the way in the covered wagon, camping over night at Peabody.”

The Hildreth family settled on the claim near Sand Creek (today 400 W 10th). During these early years, Mary “tasted of the loneliness of the pioneer woman to the depths.”   She had her second child, John, in 1873.  O.B. was  busy with the farm and breeding horses.  He was also engaged in the lumber business and laid out additions to the city of Newton.  His 1892 obituary noted that “the evidences of his progressiveness are to be found on every hand.”

In the early years, Mary was busy with family. From the 1880 census, it appears that in addition to the two children, O.B.’s parents also lived with them, as well as two boarders.   In 1892, O.B. died at the age of 49.
Postcards of the 10th Street Bridge located near the Hildreth home.

Mary was described as “a brave spirit, carrying on thru adversity, courageously and cheerfully, ever being an inspiration to the younger generation.” She was a leader in the community.  The first township election was held at their home and Mary made the ballot box.  As the community grew, Mary was involved in many activities.  “It was in the hospitable home on West Tenth street that many of the finer and better things for the community had their birth and their encouragement” including the organization of Newton’s Free Library and the Newton Flower & Garden Club.  She was a charter member of the Ladies Reading Circle established in 1880.

“For fifty golden years, she served,
In springtime and in bleak December,
A golden crown of love unswerved,
Shall deck our only chartered member.”