The front page of the Halstead Independent on October 17, 1912 announced the sad news: 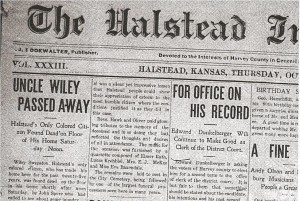 A former slave from North Carolina, ‘Uncle Wiley’, “was loved for his character, the only black man the town ever accepted.”  Lydia Mayfield described Sweptson as an “outstanding early settler” in her book, Halstead: the Early Years.

Wiley Sweptson arrived in Halstead in the early 1880s For the next twenty-five years, Sweptson did odd jobs around Halstead, but he was remembered for his remarkable cooking skills. Mayfield recalled that

“he cooked all the big dinners in town. He knew how to make a delicious roast out of an opossum . . . And his turtle soups were a real delicacy.” 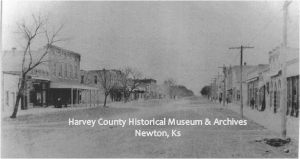 Apparently, Sweptson had an ornery sense of humor. Mayfield described one prank:

“Several men reported that they had shot a bear in Colorado and invited a large crowd to a big dinner. It was Uncle Wiley who roasted the bear that was really a big dog.

Sweptson lived alone on the east side of Black Kettle Creek in a house owned by Mayor Eymann rent free.****

The Halstead Independent noted that  Sweptson was:

“as highly respected by every citizen as any white man in town. . . . His kindly nature, strict honesty and keen regard for what was right and wrong gave him a place in the hearts and affections of all our people.”

On the morning of October 11, 1912,  George Wise, a neighbor, found him dead.  The coroner ruled it a heart attack.

A funeral was held the next day. So many people attended the funeral  at the Methodist Church that some had to stand outside  during the service. The procession to the cemetery was one of the largest the ever witnessed according to the Halstead Independent. 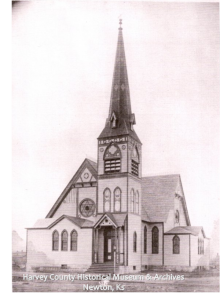 Mayfield recalled a conversation with Sweptson a few years before his death when he noted that “nobody would ever put flowers on his grave” on Memorial Day.

Seventy-five years later, Mayfield  observed  that even though “there are very few who remember him personally, there has never been a Memorial Day that his grave has not been decorated with flowers.” 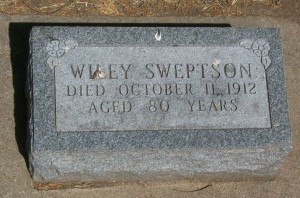 ***Update: According to a December 27, 1918 clipping from the Evening Kansan Republican, Sweptson may have owned the property. 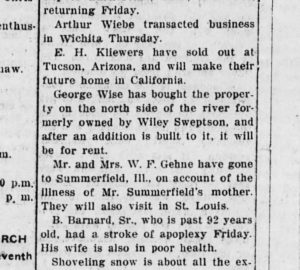