Where is the Barber Pole? #FindItFriday 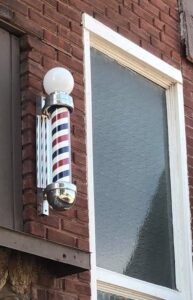 Where is this barber pole?

Maybe you have noticed it while waiting on a train. The located in the 400 Block of Main on the west side. 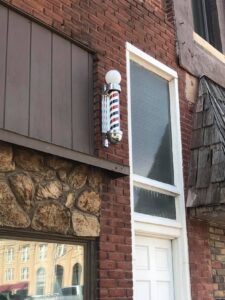 What do the colors mean?

According to History.com, people during the Middle Ages went to barbers not just for a haircut or shave but also for bloodletting and other medical procedures.  Practitioners were known as barber-surgeons. In addition to barbering, they took on such tasks as pulling teeth, setting bones and treating wounds.

Bloodletting  involved cutting open a vein and allowing blood to drain and was a common treatment for a wide range of maladies, from sore throat to plague.

The barber pole is a left over  from that earlier time. The look of the barber pole is linked to bloodletting, with red representing blood and white representing the bandages used to stem the bleeding. The pole itself is said to symbolize the stick that a patient squeezed to make the veins in his arm stand out more prominently for the procedure. In Europe, barber poles traditionally are red and white, while in America, the poles are red, white and blue. One theory holds that blue is symbolic of the veins cut during bloodletting, while another interpretation suggests blue was added to the pole as a show of patriotism and a nod to the nation’s flag.