Wayne Austin was born on July 17, 1897 in Burrton, Ks, to parents, Stephen P. and Mary Austin.  He was one of 12 children.  Throughout his childhood, the family moved around due to his mother’s health, living in Ohio, Kansas and Colorado. By 1909, the Austin family established a home on the east side of Burrton, Ks.

While at Burrton High, Wayne Austin was an excellent athlete.  In the 1914 Burrton Field Day, he took first in the hurdles and the broad jump, second in the 50 and  100 yard dash. Following high school, Wayne lived with his brother, G.C. Austin, in Mullinville, Ks.

The Burrton Graphic on July 26, 1917, reported that  “Wayne Austin departed for St. Louis, Sunday night and has joined the U.S. Marines.” He trained at Port Royal barracks, South Carolina.  Assigned to Co L 5th Marines, he went over seas on February 6, 1918..

First to be Missing

Austin was reported as missing in action on July 4, 1918.  For the next several months, there seemed to be confusion about Austin’s status.  Was he captured? Was he killed in action? It took months for his family to learn the answer. 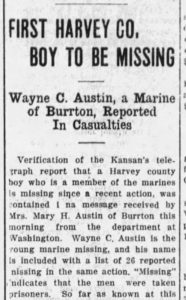 Throughout the summer and fall of 1918, the Austin family held on “the profound hope that he was captured by the enemy, but he has not as yet been located.” A letter from the American Red Cross noted that they understood the“deep anxiety and worry during these days that you must wait for news of your son . . . we are exercising every effort to get the facts.” 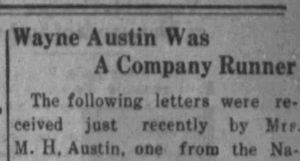 On October 24, 1918, the Burrton Graphic published a letter that Mrs. Mary Austin had received in answer to her queries about her son, Wayne.  Her letter was sent July 5, 1918. She received a response in a letter dated September 27, 1918.

“he was in action with this company on June 6th. The circumstances, as far as I know are as follows: Two platoons were making an advance in Belleau Woods and found the opposition very stiff, . . . the Lieutenant in command . . . found it necessary to send a message to the Company Commander. . . Your son was one of seven runners who bravely attempted to carry back this message . . . It is not known for certain just what happened to Private Austin as there were no eye witnesses.”

Even after the Armistice there seemed to be no answers regarding the fate of Wayne G. Austin.

Finally in late January  1919, Austin’s mother received a telegram from George Barnett, Major General Commandant, with the news that “Private Wayne Austin, Marine Corps buried July 2nd and cause of death to be determined.” 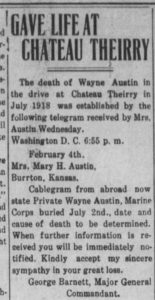 In May 1919, a memorial service was held for Austin. 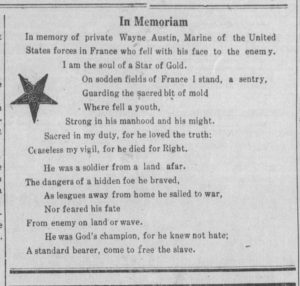 Over a year later, another piece of the puzzle. In an August 6, 1920 article, the Evening Kansan Republican reprinted part of a letter received “some weeks ago” by Austin’s mother, Mrs. Mary Lynn. Written by Austin’s commanding officer, Capt George Brantingham,  who was also injured,  “shot through the wrist . . .[he] laid in No Man’s Land from 5:15 till 1 o’clock in the morning.” Prior to being injured, he had gone to look for his missing runners when they did not return.

“I went myself and found all my runners killed in and around the same spot, there was a kind of a path worn through the wheat and a machine gun sniper got them all.  I do not know where Wayne was shot but was killed outright.”

The commander went on to say that he was wounded three times and my health is pretty bad.  The gas I got on the Argonne drive knocked me out all together.  It has eaten about four holes through my left lung and  . . . bothered me ever since.”

Wayne G. Austin was the first young man from Harvey County to be killed in action. He died carrying a message during the Battle of Chatteau Thierry and Belleau Woods on June 6, 1918. He was buried in the American cemetery on the Aisneriver, Torcy, France.  In 1921, his body was returned to Kansas in the fall of 1921. 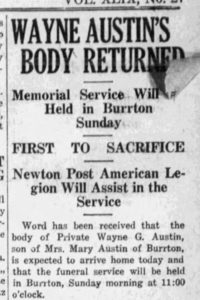