For Part 2 Buried with Their Boots On

One of the prevailing stories in Harvey County relates to the existence and location of a “Boot Hill.” The time period between May 1871 – February 1872 was a time of violence in Newton, Ks. The number of fatalities for this time can vary wildly, often with no actual facts to back the numbers up.

What happened to the victims? Stories tell us these unfortunate men may have been “buried with their boots on” at a location at the southeast edge of town, Newton’s own “Boot Hill.”

The location appears to have been common knowledge in 1880s.

The earliest local reference found so far is from the Newton Kansan 27 May 1886, which mentions the “first cemetery . . this city ever had was known as ‘boot hill’ and was located on the south side of east First street, just before reaching the dry creek bridge.” 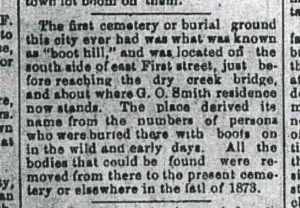 The brief notice concludes with the statement that “all the bodies that could be found were removed from there to the present cemetery or elsewhere in the fall of 1873.” This supports the idea that the bodies were moved to Greenwood quite early.

A month later the Newton Daily Republican made the following observation: 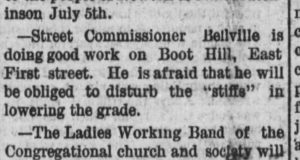 The Salubrious Soil of Booth Hill

In 1887, the Newton Daily Republican noted an error in reporting related to the November 7, 1872 shooting of George Halliday. Halliday died of a gunshot wound inflicted by M.J. Fitzpatrick on November 7, 1872 on Newton’s Main Street.  In turn, Fitzpatrick was fatally shot by Marshall Johnson. The newspaper editor reported that Halliday’s “remains were removed from their first resting place in the city cemetery and interred in the Masonic grounds in the same cemetery.” This would have been the newly established Greenwood Cemetery on East 1st.

The editor clarified that “it was Fitzpatrick . . . who was given the extemporaneous burial in the salubrious soil of Booth Hill.” He explained Boot Hill was a place reserved for “the mortal remains of men who had been distinguished ‘holy terrors’ . . . that could be honored by an insertion in that classic clay.”  In contrast, Halliday was “a good man and was buried with great honor and respect in the city cemetery.” 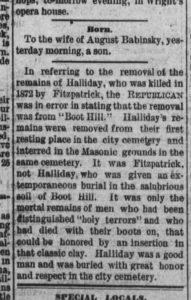 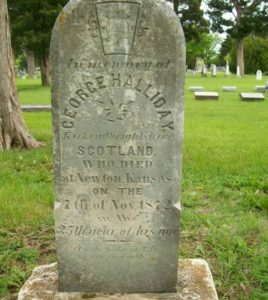 Another question surrounding Boot Hill is the number of burials.   Not all accounts agree on the numbers of men killed in 1871-72.  Judge RWP Muse, who was in Newton during this time is probably the most reliable source.

“June 16, 1871, Snyder shot and killed Welsh, in front of Gregory’s saloon, both were ‘cow-boys.’ A few days later Johnson killed Irvin in the Parlor Saloon.  His pistol accidentally discharged . . . About the 1st of August, a young man, named Lee (some 20 years of age) was shot and killed in one of the dance-houses in Hyde Park, accidentally, it is claimed.”

In his account of  the General Massacre on August 20, Muse mentioned only 3 men as fatalities, noting that at least three others, “whose names we have forgotten,” were wounded.  His  retelling of the story leaves out the August 11, 1871 shooting death of Billy Bailey that served as a trigger for the shoot out in Tuttle’s saloon.  Muse recounts 6 more violent deaths from September 1871 to February 1873.

Muse concluded that “instead of forty or fifty having been murdered in Newton, during this terrible period of lawlessness, there were but twelve in all and two of these  were killed accidentally.” Muse does not  identify where the men were buried.

The cemetery is again mentioned in 1890 when a house near “boot hill” “burned to the ground,” cause unknown. 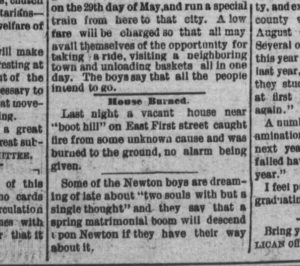 “Newton City’s first burying ground was known as “Boot Hill” it was located on First Street just east of the Missouri Pacific railroad on the south side of First Street, the first interment was made along some time in June 1871.”

The 1903 article gives a much higher number of burials than Muse, stating that there were “thirty-two interments, only two had died a natural death, others had died with their boots on,” setting the stage for stories and legends to grow.

No records have been found that document who was buried in the earlier cemetery or even how many burials.

Established in 1872/73,  the land for Greenwood Cemetery was purchased from H.L. Langan in July 1873 for five hundred dollars. The original  forty acre plot was located in the southwest quarter of the southeast quarter of section 16, Newton Township. At that time, the burials at the Boot Hill location were moved to the new cemetery.

In part 2, how the legend, and numbers, grew.