This post is in connection with our current exhibit, Games People Play.

The Noble Game of Billiards

Billiards or pool has a long, rich history.  Played by people of all social levels, billiards evolved from the outdoor lawn game, croquet.  Shakespeare mentioned the game in his play Anthony and Cleopatra. Standardized rules of play were first printed in the mid-1600s.

In 19th century America, the word ”Pool” referred to a collective bet or ante in betting parlors for horse racing.  Billiard tables were installed in the parlors so patrons could pass the time between races.  The more unsavory connotations of the“poolroom” came from the betting that took place, not the game itself.  By the 1920s, the poolroom had become a place where men gathered to loiter, smoke, fight and play, adding to the game’s reputation. 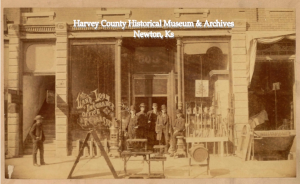 In the mid-1890s, a challenge was issued to the status  quo by Frances Anderson.  She declared herself  “the champion woman billiard player” and offered $5,000 to any woman that  could beat her.  Anderson was undefeated for the next 25 years, also beating many of the men that played against her.  During the early 1920s, she toured North America and Europe, giving exhibitions and beating challengers.  Shortly before her death, Anderson gave a exhibition  at the Smoke House Billiard Hall, in Newton, Ks.

For all of her notoriety as a pool player, Anderson’s personal life remained a mystery.

As she got older, it became more difficult to compete.  Her eyesight began to fail.  Years spent in dark, smoky rooms had taken a toll on her health.   By the time she was in her late 50s, Anderson was no longer “pretty” and no longer in demand. “Swede” Wilson, proprietor of Swede’s Pool Hall, one of the last people to talk with Frances, later noted that “she wore a wig and spoke with some effort with a gruff voice.” Despondent, Anderson brutally took her own life in  a hotel room in Sapulpa, OK on March 29, 1928.

Crumpled in one of the women’s stockings in the room was a note which said, “Do what you will with my body, but don’t let the world know my secret.”

At the mortuary,  the secret that Frances wanted hidden from the world was discovered  – Frances was a man.

The story made headlines in Oklahoma and Kansas.  Surprised by the discovery, Swede Wilson commented to the Higbee News that Anderson “did not handle the pool cue like a man . . . No one suspected the masquerade.” The Higbee News concluded with the questions: “Who the man really was, where he came from or the cause of his masquerading as a woman, is a complete mystery.” 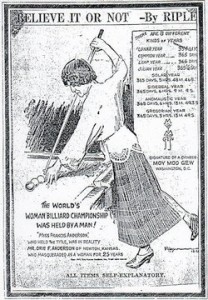 The sensational story might have ended there except for one woman.  In Newton, Kansas, Amy Belle May, (Mrs.Will D. May), read the shocking newspaper reports describing the life and death of Frances Anderson.  Something about the story made her pay attention.  Her brother, Orin “Orie” Franklin Anderson, had been estranged from the family for nearly 30 years. After a disagreement regarding his “gaming”, Orie, age 15,  told his family that “he would go away , that they would not hear of him again and would not even know when or where he died.” Over the years, Amy May had received one or two letters. The last correspondence from her brother was a postcard dated fifteen years before.

She determined to travel to Sapulpa, OK, to see if she could identify the body.  Based on the handwriting on postcard and letters in her possession, and her positive identification of the body, it was determined that “Frances Anderson” was indeed her brother Orie.  The body was turned over to her and shipped to Sprinkler Mortuary in Newton, Ks.

“several who saw him at the mortuary declared without hesitance that they are convinced that the person who has posed as Frances Anderson is none other than Orie.  His peculiarly shaped nose is unmistakable, his high cheek bones, high forehead, the effeminate size and shape of his hands, his size, apparent age, his hand-writing, the name he adopted, the calling he was in- every detail is absolutely convincing and positive in the identification.”

“his conduct . . . was exactly like that of Orie Anderson. He was nervous quick , silent, but he still showed his old time skill. [Anderson] stated that he had been traveling about the country giving exhibitions for many years, and no one who saw him disguised as a woman here had the least thought but what he was what he posed to be.”

The writer of Orie Anderson’s obituary expressed sympathy to the remaining Anderson family and a hope that comfort could be had “in the knowledge  that the wayward boy has at last been found.”