The culture of the Native Americans in the late 1880s and 90s was fascinating to white Euro-Americans, even as it was changing and disappearing. As a result, there was opportunity for photographers to open studios and sell prints of life in the West. The time period between 1875 and 1920 is sometimes called the “Golden Age of Western Photography.” One area of particular interest was focused on the live of Native Americans.

One photographer was William S. Prettyman.  Born in Maryland in 1858, Prettyman first came to Emporia, Ks in 1879 “with 5 cents in his pocket.” 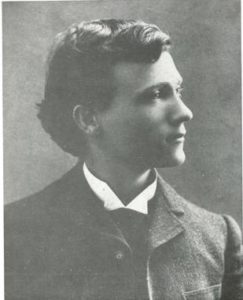 He eventually made his way to Arkansas City, Ks where he apprenticed with I.H. Bonsall, a well-known Civil War photographer. In 1883, he made his first foray into Indian Territory in his cameras and other equipment in a custom built buggy pulled by oxen. 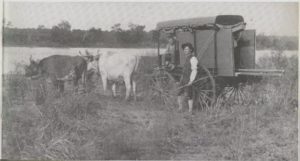 This became an annual tradition and he quickly became known as “the Picture Man” among the Native Americans he met.  He made friends easily and was at first interested in the Osage tribe, but over the years his interested expanded to include the Ponca, Otoe, Iowa, Sac, Cheyenne, Arapahos, Shawnee, Cherokee and Pottawatomie. He was able to photograph many of the principal chiefs of the various groups.

In general, his work is described as “journalistic and documentary, rather than pictorial.” He “resented the acculturation” he observed and tried to document  customs and rituals. He wanted his photographs to show Native Americans “in their natural state of living, before civilization took them off of their land.”

There are two photos taken by Prettyman in the Photo Collection at HCHM. 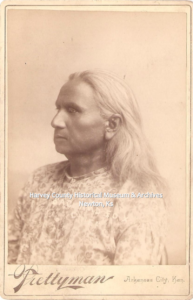 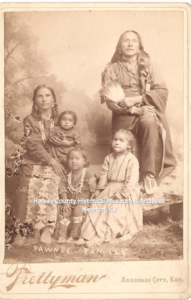 Prints, like the ones above, were typically mounted on cabinet cards, boudoir cards, and stereographs and marketed to  tourists  and easterners who displayed the photos in their homes.

After about 10 years, Prettyman moved to Blackwell, Ok where served as mayor. He continued to take photographs.

In September 1893, the opening of the Cherokee Outlet, gave him the opportunity to take one of the  first motion photographs. To get  photographs of the action, he had to make plans well in advance and in secret. He hired men to build a 3 story platform near the starting point, but they were not told why.  Prettyman was also careful to stay away from the construction of the platform. All of his efforts to keep his plan a secret paid off. He was able to set up four cameras by the noon opening of the run.  He instructed his employees to “squeeze the bulbs of their camera at two-second intervals as soon as the race began.” Four photos were taken, since each camera could only take one picture. With everything set up and ready to go,  Prettyman decided to enter the land run himself and let his assistants take the photographs. 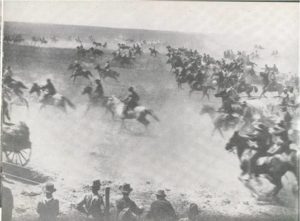 Of the four photographs, one was destroyed because is was considered poor quality. One caught the moment the race began, another showed the slower wagons behind the horses and the final photo showed the racers fanning out. Prettyman’s photo of the opening  of the Cherokee Outlet “became one of the most famous images of that era.”

He reportedly made over 10,000 pictures over the length of his career.

In 1905, he sold the studio, including the negatives, to George W. Cornish and moved to California.  In California, he operated a wholesale drug business.