“The Neatest Place in the World”

Recently, a researcher inquired about the location of Newton’s Airport. He had found an older map that show an airport at the north end of Newton. 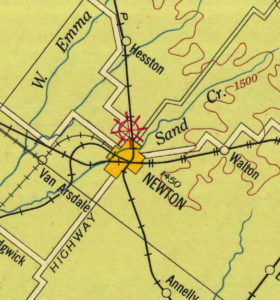 After some investigation, stories about this earlier airport were discovered.  He wrote of his findings and on-going research on his blog the Changelog. We thought we would share some stories discovered as we assisted him in his research.

Last week’s post featured an Aviation Meet held in 1911. The information for this post comes from  a short document by Ernest Unruh, which can be found in the Archives.

The Neatest Place in the World

Unruh wrote of his adventures growing up on the north edge of Newton, Ks.

“When I was a youngster growing up, I thought I lived in the ‘neatest’ place in the world.” 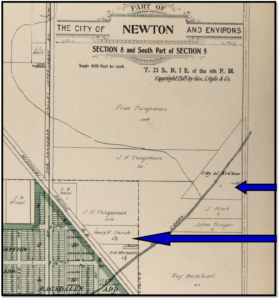 Ernie’s father, Henry, ran a service station at 1812 N. Main for many years. 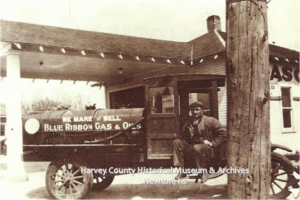 The area east and north of the Unruh home between the Missouri Pacific Railway Tracks (Mopy**), 22nd Street, and Anderson Road was known as the “golf links.” ***  With the nearby train tracks and large open area, there were many activities to occupy young Ernie.

Six days a week a freight and passenger train would travel toward McPherson in the morning and return in the evening on the Mopy tracks and Ernie was there to watch.

“Every chance I had I would watch the trains go by so I could wave at the crews.”

In the 1920s, the open area north of Newton was  a favorite place for pilots to land and take off.

“I was fascinated by airplanes. When I would hear one, I would search the sky until I spotted it and then I would follow it until it was out of sight.  Many planes would go almost directly overhead going both directions, north or south . . . more and more planes were using the golflinks as a landing field.  When a plane was going to land, it would generally circle the town first.  I’d jump on my bike and head out to the landing field.  If at all possible I tried to see every plane that landed. Sometimes I would be the first person there to meet the people aboard.  On occasion I would make phone calls for the people . . . for a taxi.”

One time was particularly memorable:

“In about 1924, my Aunt Helen took us to the golflinks to see an airplane. . . .  What I saw was a huge plane that was bright yellow and blue.  It looked like it was made of celluloid.  It looked to me like it was too big to fly.”

In July 1927, the golf links area, “a fine open stretch of 70 acres, just west of the end of the Main Street paving north of the city,” became the official airport for the city of Newton.

Ernie recalled that  “a two plane hanger had been built along the Mopy right-of-way to house a Swallow owned by Bert Wright and a Travel Air owned by Ira Burke.” Another local aviator, Bud Nellans, stored his Army Jenny outside.

Grand Opening of the Newton Airport 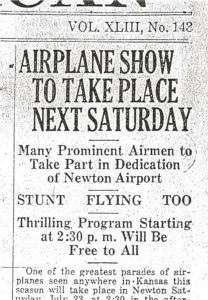 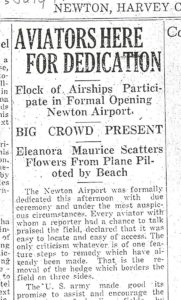 The dedication of the new airport, planned by the Newton Chamber of Commerce, was described as a “thrilling event.” On July 23, 1927, eleven planes participated in the grand opening with an attendance of 5,000 people.

Walter Beech, Wichita, flew his Travelair to Newton carrying “two of Newton’s own celebrities, Mrs. Eleanora Ambrose Maurice, internationally famed dancer, and Lieut. Ennis C. Whitehead, world known as a member of the Pan-American good will flight.”  As Beech circled the field, “Mrs. Maurice dropped flowers on the field, dedicating it to the progress and prosperity of aviation.”

Planes from Fort Riley flew in formation over the field.  The editor also noted that

“Passenger planes at the field were busy until dark taking Newton people up for a ride in the clouds.”

Burke “flew  a blue Stearman with silver wings equipped wit a propeller driven siren, and, when he flew over town, he would release the brake on the siren for a short time.  It could be heard all over town. . . many times , he would do acrobatics over the town before he would land.” ****

The new airport also provided opportunities for advertising local businesses. One savvy businessman used the popularity of flying and planes to promote his product. 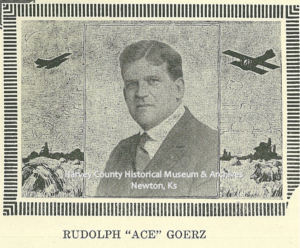 “Rudy Goerz, owner of the big flour mill on east Broadway sponsored a plane to advertise his ‘American Ace’ flour . . . The plane had an emblem  of a flour bag painted on it’s fuselage showing a pilot’s head complete with helmet and goggles and “American Ace.”

To promote the flour, pilots, Eddie Rickenbacker and Dillard Kennell, flew the plane with all over the United States. 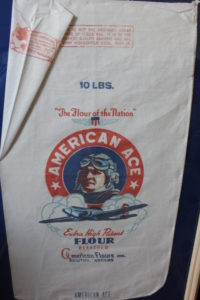 The planes were also a source of entertainment for local people.

“There were three different Ford tri-motors that came in periodically to give rides . . . Many pilots would come in to give rides.”

By  1940, the City of Newton had decided to move the airport.  A strip of land three miles east of Main between 1st and 24th streets was purchased.  The new airport was named Wirt Field in honor of Frank Wirt, the local Dodge dealer, who was killed in a private plane crash. 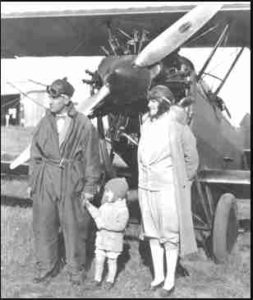