“First Class in Every Respect:” The Clark Hotel

In April 1913, long time Newton resident, Chris Haman, noted to a newspaper reporter, “I never expected to live to see the building torn down” as he watched workers tear off the roof of one of Newton’s tallest buildings.  Haman who worked on the construction of the Clark Hotel in 1887 and later in the hotel as a baggage master, was referring to the razing of  one of the first four story structures in Harvey County, the Clark Hotel at the corner of Main & 4th.  What was once “one of the finest hotels in the state” would soon be rubble, and today, a parking lot.

The southwest corner of 4th & Main

The southwest corner of 4th and Main was a ideal location for a lodging, and since the mid-1870s a hotel had been located at this corner. Business men of the late 1800s preferred rooms in downtown boarding houses or hotels within easy walking distance of the business district and railroad. For several years, the Rasurre House, located at 4th and Main, provided a place for travelers to stay that was conveniently next to the depot and railroad tracks.

In 1869, Illinois native, George Clark settled near Fort Riley, Kansas. Clark later moved to the new “hamlet” of Wichita where he worked as a messenger for several years. During that time, he visited the growing community of Newton, and with the help of his sister, Mrs. Mary L. Howard, decided to enter the business of running a hotel. 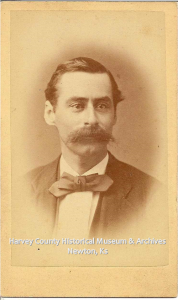 George Clark purchased the two story Rasurre House in 1876.  The hotel was renamed “Howard House” after his brother-in-law, Lt. Ruben Howard, who died in 1875.  Clark began to make improvements almost immediately.  For a time, Mary, assisted him in the running of the hotel and lunch room. She married Capt Hubbard W. Bunker, Harvey County Treasurer and Civil War Veteran, November 28, 1877.  Bunker died suddenly in 1894, and at some point after that Mary left Newton to live in California with a daughter. She died in June 1918 at the age of 77.

Due to the efforts of the Clark siblings, the reputation of the “Howard House” grew over the years.

“We can conscientiously advise our friends to visit the Howard House when at Newton.  It is just across from the depot, and is strictly first-class and the proprietor, Mr. Clark would be sure to make you feel at home.” 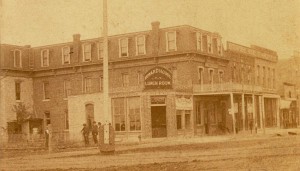 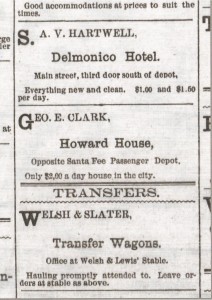 “The Design is Modern”

In 1886, Clark  decided to expand.  He hired Varney Bros from Detroit, as architects. 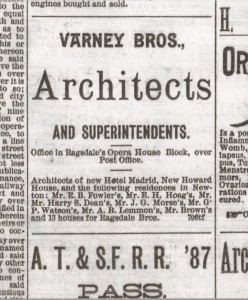 The result was a grand four story structure with a basement. The hotel had a frontage of 64 feet on Main and 69 feet on 4th with a circular tower extending to the roof and “handsome iron balconies extending the whole length  on the second and third stories.”    The remodeled Clark Hotel, a stone, four story, turret-clad structure, was regarded as one of the “finest hotels in the state.” 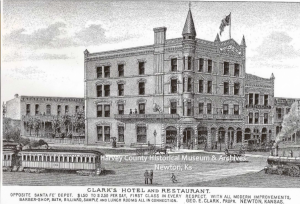 The interior was also luxurious. The basement housed bath rooms, water closets, and a barber shop in addition to a boiler and laundry. The first floor included a dining and lunch room, reading room, sitting room and clerks office.

The dining room was described as the “handsomest in Kansas” with mahogany finished wainscoting on the walls and a ceiling of imitation hammered brass.  The separate lunch room was near the front entrance facing Main and was “fitted up with all the modern conveniences and will seat about forty persons.” An elevator was located near the clerks office.  The second floor contained a bridal parlor, “richly carpeted and furnished.” A private residence for the Clark family was also on the second floor.  The rest of the second and third floor was contained bedrooms with closets, 76 in total, and each floor had a bathroom.

The first floor had both gas and electric lights, and only gas lights on the upper floors. The furniture was also quality.

[It came] “direct from the factory at Grand Rapid’s, same as that in Coronado House.  It is of antique oak and mahogany finish.  The carpets are velvet, Wilton and body Brussels, . . . the mattresses  . . . were manufactured in the house under the person supervision of Mr. Clark.” 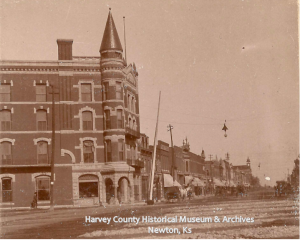 In the midst of overseeing the construction of the new hotel, Clark married Minnie B. Tillotson on February 10, 1887.  They had three children, with only two surviving infancy, Marguerite and George R.

The Clark Hotel officially opened on Sunday, November 27, 1887 at noon with an elaborate meal and guests from as far away as London. 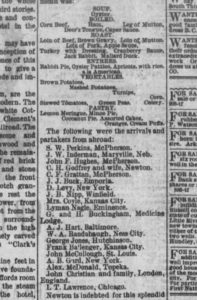 Shortly after the hotel was opened, Clark’s health began to fail.  He and his wife, Minnie, left the hotel business in 1892 and opened a steam laundry at 115 W. 5th in Newton. 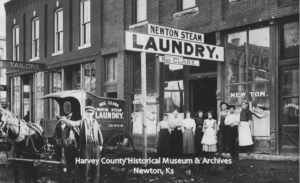 George Clark died of consumption a year later on 25 November 1893.  He was 50 years old.  Mrs. Clark continued with the laundry business  after the death of Mr. Clark.

***Our next blog post will continue the history of the Clark Hotel.***