Picnics In the Moonlight and Masquerade Balls

Our post this week starts with a mystery and a set of three faded photos.  In faint ink, in the lower right corner of one of the photograph is “Turner Hall.” On the back there is a notation – “July 1900. Turner Hall Picnic, Prouty’s Grove.” Through newspaper references,  a story emerges of an organization that was active in Harvey County at the turn of the century. 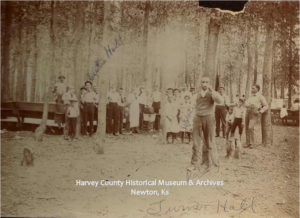 The Turnverein, a combination social and athletic club, was originally organized early in 19th century Germany by Friedrich Ludwig Jahn as a gymnastic movement to prepare young men for the military.  By the late 1800s the movement had changed focus and the organizations in the U.S. and Kansas stressed physical exercise and social activities.   Members were called “Turners.”

“Finest gymnasiums in the state”

A Turner society was formed in Wichita by German immigrants in the 1870s.  In Newton, the Turn Verein was established in 1883 by eight men.  By the tenth anniversary of the Newton organization in 1893, they owned “several lots on Ash street and have built one of the finest gymnasiums in the state.” Throughout the late 1890s and early 1900s, the “Turners” were quite active in Newton, hosting masquerade balls, monthly picnics and other social events. 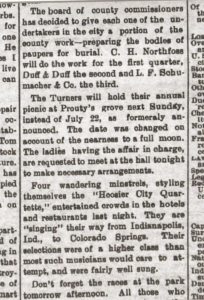 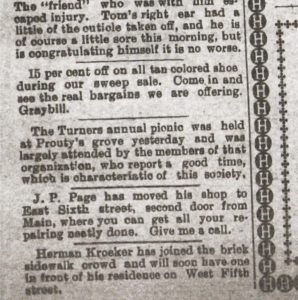 The photos are of a picnic held in July 1900 at Prouty’s Grove.   Because the picnic was expected to go late into the evening, it was important to hold the event when the moon was full to take advantage of the moonlight. 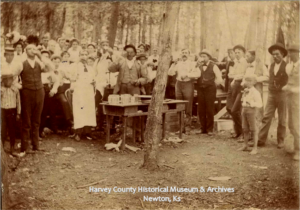 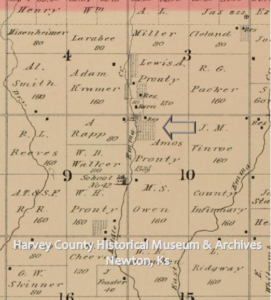 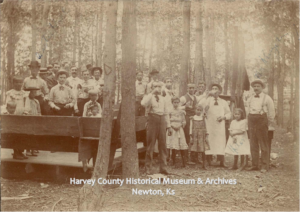 The Turner’s Masquerade Ball was also a popular activity.

“During its many years existence, the Newton branch . . . has given a number of such affairs, but none has proved more successful or has yielded more unadulterated fun that the masquerade ball given in Turner hall.”

Eighty people attended the Masquerade Ball  in January 1901.  Costumes were “elaborate and unique, ranging from the beautiful to the grotesque.”  Kosa’s orchestra “fairly out did itself in furnishing inspiring music for the dancers.”

In the last years of its existence, Turner Hall was used much like a city auditorium.  By the summer of 1918 , the Turners, as an organization, seems to have disbanded.  The gymnasium equipment was given to local schools and the lot where Turner Hall stood was sold to Clarence Merriam. In 1919, Turner Hall, erected in 1885,  was torn down to be replaced with “neat modern cottages.”