“Milked by a Snake?”

Sometimes it is hard to know how much truth is in a story, like this recently discovered oddity from the Newton Daily Republican 27 June 1895 with the headline “Milked by a Snake: A True Snake Story that Should Take the Leather Medal.”

The newspaper editor assured people the story was “vouched for by A.L. Bartlebaugh, who is well enough known throughout the county as a truthful man.”

According to the Newton Daily Republican, J. W. Miller, a Dunkard farmer living north of Walton, was having difficulty with his cows.  For several weeks they had been coming home “in a somewhat excited condition.” Every evening one would have a swollen, inflamed  udder and would give no milk.  The cow had symptoms similar to poisoning and would eventually die.  After the eighth cow died, Miller became desperate to learn the cause.  He decided to “spend a day with the animals to watch developments.”  He witnessed the “strangest sight.”

“A monster bull snake, eight feet in length, appeared in the pasture and raising itself to the udder of the cow, grasped the teat with its mouth.  The cow was badly frightened and ran about the pasture in a frenzied manner.  The snake hung on for dear life, fastening its fangs into the teat, and sucking out the milk.  When it had had its fill, it dropped off.”

Miller quickly worked to kill the snake and solved his problem. He did not lose any other cows.

The reporter agreed that the story seemed incredible and that they had never heard of a similar case.  In fact, “the incredulous are scarcely willing to believe it until given the names of those concerned”  – A.L. Bartlebaugh and J.W. Miller – deemed to be truthful men.

Alexander L. Bartlebaugh, a veteran of the Civil War,  was an early settler in Harvey County, establishing his farm in May 1872.  His obituary noted that with his passing “the community loses one of its oldest and most highly respected men” known for his hospitality to travelers and kindness to all.

Over the next several months the “Newton Snake Story” appeared in newspapers across Kansas including the Osborne County Farmer, Galena Times, and the Leavenworth Times with no additional comment.  One article from a paper identified as  Inter Ocean – August 16, 1895 included the added comment that “the body of the monster has been preserved in alcohol and will be donated to the museum of the State University at Lawrence.”

Since the last article specifically mentioned a museum at Kansas University, contact was made with Dr. Rafe M. Brown, Curator-in-charge, Herpetology Division,  Natural History Museum, Dyche Hall at KU. He graciously replied noting that the story seems to be part folklore and part mis-identification. 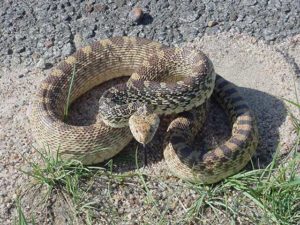 The story likely involves incorrectly identifying the snake as a  Bull Snake (Pituophis melanoleucus) when it likely was a Milk Snake (Lampropeltis triangulum).  Neither snake could actually “milk” cows.  The Milk Snakes got their common name when farmers would blame low milk yields on the snakes. The farmer observed a snake in the area of the herd and assumed the snake  had somehow attached to the  udder and drained it. 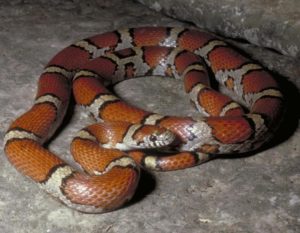 Over the years this has given rise to stories and legends about snakes ‘milking’ cows. Dr Brown states;

“There is zero factual basis for these kinds of urban legends; in any case, perhaps the reporter of your 1895 piece observed a Pituophis in the area of a herd, and assumed it must be up to no good?” 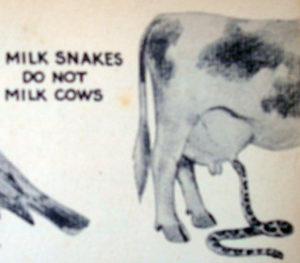