“The Desire of Her Heart:” Sister Frieda Kaufman 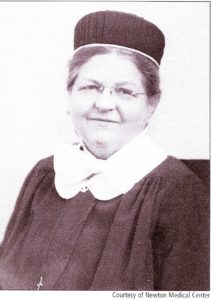 On May 27, 1942, Sister Frieda Kaufman received the Honorary Degree of Doctor of Humane Letters from Bethel College for her lifelong work as a deaconess and ‘sister-in-charge’ of the Bethel Deaconess Home and Hospital in Newton, Ks. Sister Frieda was the first Mennonite woman to receive an honorary degree from a Mennonite institution of high learning. After the ceremony for the conferment of the degree, Sister Frieda returned alone to the sisters’ home and later that day “a friend found her on her knees washing the floor.”

Known to most people in the community as “Sister Frieda,” she was the driving force behind the Bethel Deaconess Home and Hospital and the deaconess program in the Mennonite Church.

Frieda was born in Haagen, in Wiesental, Baden, Germany on October 23, 1883, the ninth child born to John and Marie (Egle) Kaufman and one of three that lived to adulthood.  As a child, Frieda attended a schools run by Lutheran deaconess and later Catholic nuns.  Years later, she recalled her childhood affinity with the deaconess and nuns, noting“the desire of her heart to become a sister did not disappear” as she got older.

At the age of 8, Frieda with her family migrated to the U.S.  After a long, difficult journey the Kaufman family arrived in Halstead, Ks on July 2, 1892. Their transition to life on the prairie was made easier by members of their extended family already living in south central Kansas. Frieda did not forget the “desire of her heart.”

“The Desire of Her Heart”

In the late 1890s, Rev. David Goerz, Newton, Ks, was exploring the possible ways for women to serve within the structure of the Mennonite Church. He was interested in the deaconess programs within Lutheran churches and considering such a program for the Mennonite Church. The idea of deaconesses was rooted in early Christianity as a way for unmarried women or widows to voluntarily care for the poor and sick in the community.  The word “deaconess” comes from the Greek word diakonia which meant “faith active in love and service to all.” In the late 1800s, the idea of deaconesses was popular among Protestant  churches.  Under the leadership of Goerz, the idea of deaconesses in the Mennonite Church gained popularity. In Frieda Kaufman, Rev. Goerz found the first young woman interested in dedicating her life to the work.

In August 1902, Frieda began at training  the Interdenominational Deaconess Home & Hospital in Cincinnati.  During training, she lived at the hospital and was expected to work twelve hour shifts in addition to attending classes and keeping up with assignments. She completed her training and returned to Kansas in 1904. She started working at Bethesda Hospital & Home in Goessel, Ks, and in private homes in the area. 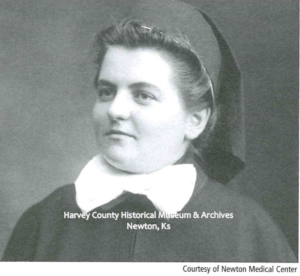 On June 11, 1908, the Bethel Deaconess Home & Hospital, located on south Pine in Newton, was dedicated and the first three Mennonite deaconesses in America were ordained, Sisters Frieda Kaufman,  Catherine Voth and Ida Epp. At the age of twenty-five, Sister Frieda was appointed deaconess mother and superintendent of the hospital in addition to her nursing duties. She also taught and oversaw the nurses’ training school at Bethel Deaconess Hospital. 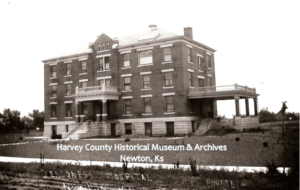 Over the next twenty years, the administration of the hospital would take more of Kaufman’s time as the institution grew. Until 1943, Sister Frieda was a constant, driving force for both the hospital and home, as well as the deaconess cause within the Mennonite Church.

Sister Frieda was described as a “short and somewhat overweight” woman and “she had to puff a little upon excretion.  Her countenance was always very pleasant.” Sister Theodosia Harms, who lived and worked with Sister Frieda for years, noted Sister Frieda had a reputation as being a “very precise individual, anything that had to be done, had to be done perfect,” and she expected this of herself as well as others.  Nursing students remember that her office door was always open.

In the community, she was an active member at 1st Mennonite Church, 429 East 1st, Newton. Her influence can be seen in the stain glass windows of church built in 1932. She viewed the art-glass windows as a”reverential necessity.” 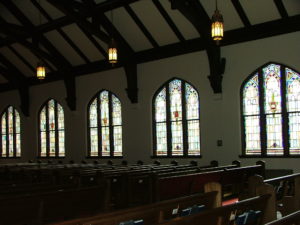 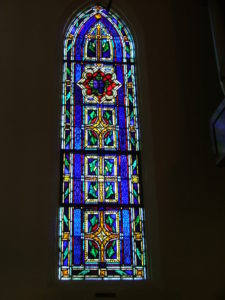 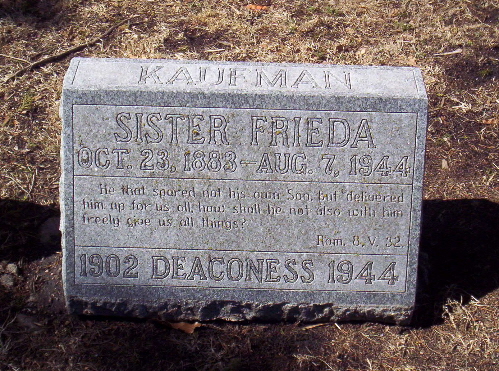 This post is condensed from a longer biography of Sister Frieda Kaufman by Kristine Schmucker, 1991.