“With a Rush and Roar:” Newton Water Tower

One postcard in our collection has the dramatic image of a large metal drum teetering on the edge of a stone tower – the notation “The Fall of the Old Water Tower, Newton, Kans.”

An amazing photograph, capturing a moment in time, with a long story behind it. 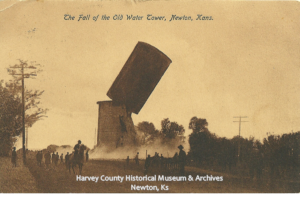 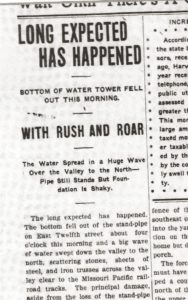 The Evening Kansan Republican reported that

“with rush and roar . . . a big wave of water swept down the valley to the north, scattering stones, sheets of steel, and iron trusses across the valley  clear to the Missouri Pacific railroad tracks.”

The farm of Silas Frame “a colored man, who lives in the Ensign house, a few rods northwest of the water tower” sustained the most damage.  “The trees in Mr Frame’s young orchard were pulled out by the roots and carried along by the water.”  Other damage included snapped telephone poles, damage to the hedge row  and a corn field.

If the pipe had broken on the south side, there would have been a great deal more damage to property.

“Last night’s accident has brought the matter to a crisis.”

“The stone foundation of the tower had been in shaky condition for some time.  The city authorities had been aware of this condition for months, but there had been some uncertainty as to the best course to pursue.  Some favored repairing the tower; others a complete new tower.  Last night’s accident has brought the matter to a crisis and makes anything but a new tower entirely out of the question.” 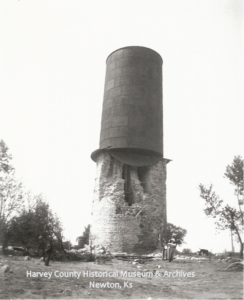 Discussion of what to do with the water tower at 12th and Walnut was not new.  The city of Newton purchased the tower and equipment from the Water Works Co. for $75,000 in April 1895.

In February 1896, repairs took place on both the stone base and the steel pipe water tower.

“The water committee was instructed to have the water tower thoroughly repaired at as small expense as possible.”

By April 1901, it was noted that “the water tower is in a rather precarious condition and its future existence is a matter of some uncertainty.”

“People living near . . . are hoping that this action will be taken speedily.”

In an article in July 1906, it was reported that the northwest corner of the base was “crumbling rapidly . .. and even from Main street it can be seen that a large portion of the wall is gone.” 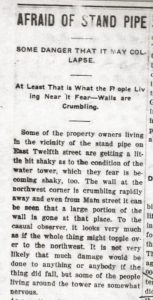 The same article reported that the “council has given some thought to the matter lately and a committee was appointed . . . to investigate and report as to the best action.”  The reporter noted that “the people living near the tower are hoping that this action will be taken speedily.”

Removing the Water Tower: May 1907

Nearly a year later, the decision was made when the rock base of the tower collapsed on one side early in the morning of May 25, 1907.

Shortly after the collapse, the Council voted to “have the water tower removed.” 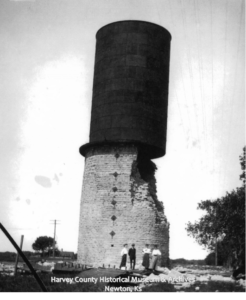 On May 30, 1907, with “about half the town’s population there to witness,” the water tower came “tumbling down” at 3:30 in the afternoon. Local businessman, D.S. Welsh and his crew pulled the structure down on their third attempt. 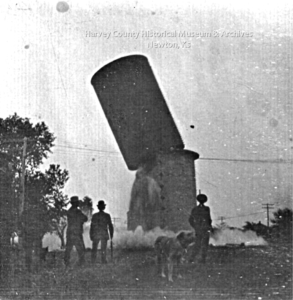 “A man climbed to the top of the tower and put a pulley there by which the steel cable was pulled to the top and there attached so that the pull would be on the top. . . the big steel tower fell slowly to the north striking the ground with a terrific roar and being obscured for several moments by a big cloud of dust.” 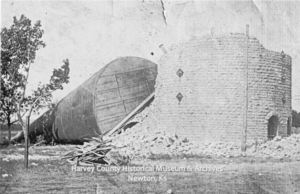 “Purest water in the State”

The City Council then turn their attention to a new water tower. 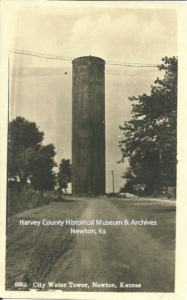 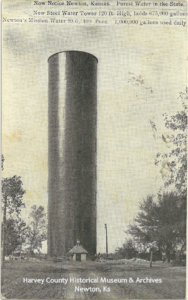 The Council also had to address the issue of damages.  Silas Frame’s orchard sustained the most the most damage.  At the June 1907 meeting, he presented a bill for $400 damages to his young trees.  He noted that “the orchard was damaged to that extent when the water and rocks rushed over it.” At the October 1907 meeting, it was reported that the matter was “settled with Mr. Frame for $250 . . . for the damages.”