The creation of shelterbelts and windbreaks in the late 1930s and early 1940s, involved the cooperation of individual farmers, the US Forest Service, the Civilian Conservation Corps and the Works Progress Administration. During the Dust Bowl years, the effects of years of over working the prairie became obvious. 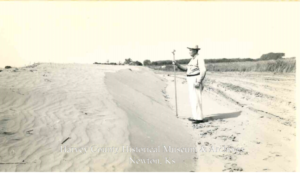 While campaigning for president in Montana,  Franklin D. Roosevelt came up with the idea of wall of trees to combat hill-side wind erosion.  His initial idea was a single solid wall of trees several miles wide running from the Canadian border to the Texas panhandle. A more realistic plan called for a series of walls from North Dakota to Texas. 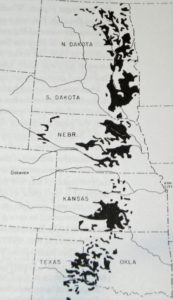 By 1942, there were 220 million trees, stretching 18,600 miles from North Dakota to Texas. The Shelterbelt Project was a successful federal program.  The goal was to reduce erosion and lessen water evaporation from the soil of farm lands across the United Sates, in addition to reducing the amount of dust pollution from the wind storms. 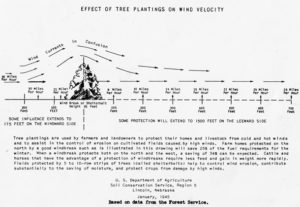 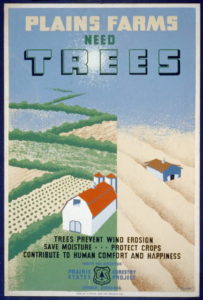 The Harvey County Extension Office played an important role in providing farmers with the information and trees to implement these measures in Harvey County in 1939-1943.  The Annual Reports written by H.B. Harper, Harvey County extension agent, provide insight into the farmers that participated, the demonstrations given and the success of the program in Harvey County.

“Windbreaks have Become Rather Popular” 1939

In 1939, a section titled  Farm Forestry is included in the Annual Report of the Harvey County Extension Agency.  H. B. Harper, Harvey County Agricultural Agent, noted that Harvey County was involved with the Prairie States Forestry Project with the purpose to “promote the planting of trees.” With cooperation from  the Forest Service, Harvey County farmers were  able to plant 284 acres of trees on forty-seven farms. 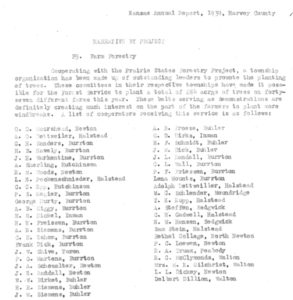 Harper also reported that “trees planted for windbreaks have become rather popular.”  In 1939, 4,200 trees from the Fort Hays Nursery were planted on eighteen farms in Harvey County.

He noted that the purchase of the trees was possible  under the Clark-McNary distribution program. 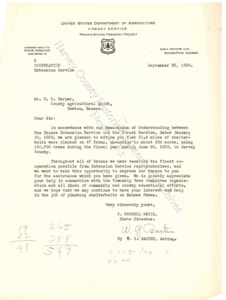 “More Enthusiasm Must Be Mustered” 1940

In 1940, Harper reported that 40 farms had shelterbelts “using 133,252 trees is a major accomplishment.” Demonstration planting meetings were held at two farms, Jonas Voran’s farm, located in Garden Township, and Waldo Voth’s farm in Pleasant Township. Despite Harper’s optimism in his opening reports, the tone for section on “Farm Forestry” was subdued.  He noted that “more enthusiasm must be mustered into 1941 if Harvey County is to achieve as much as it should in the worthwhile project.” 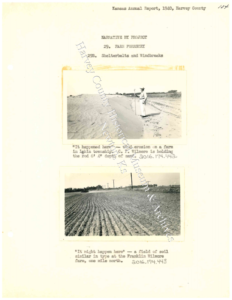 “But it can’t happen here.” 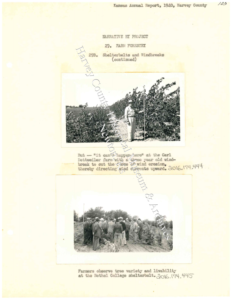 “Good care . . . will insure any farmer an excellent wind-break” 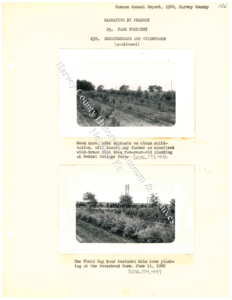 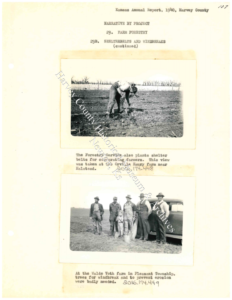 “Demonstrating the planting of a windbreak” 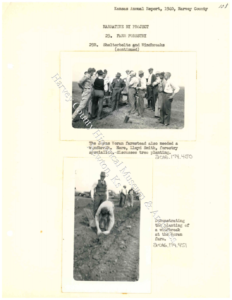 “Must be protected from rodent injury.” 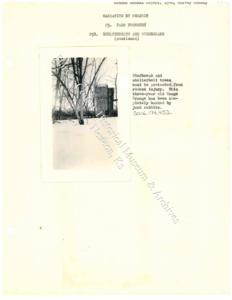 In 1940, nineteen miles of trees were planted on forty-two farms.  Adding the number of trees to the 1939 number, a total of 40.4 miles of trees planted on 89 farms. Harper concluded his 1940 summary noting that “land use planning is a new baby in Harvey  County. Through community and county planning committees, we are assured of a real progress in 1941.”

In the 1941 Annual Report, Harper noted: “The program instituted through the forestry service four years ago has been very popular this year.”

“Demonstration on the Correct Method.” 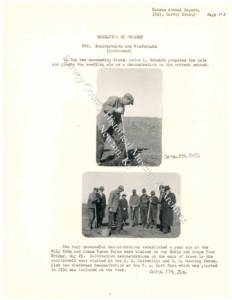 A.C. Dettweiler, Halstead Township, received acknowledgement for his farm and the successful shelterbelt that was 3 years old in 1941. 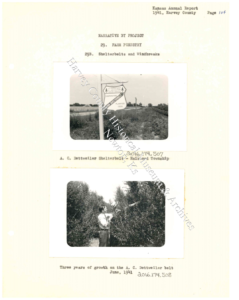 In 1942, the report included a list of farms participating in the program, noting that “tremendous damage was experienced on many shelterbelts and windbreaks June 12, 1942, but all have recovered.” 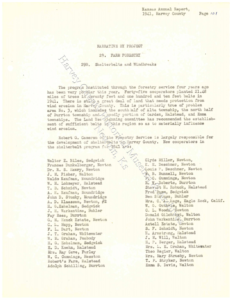 The 1943 report was the last one to specifically mention Farm Forestry, Shelterbelts & Windbreaks. Harper noted briefly that there were “73 miles of shelterbelts growing on 154 farms . . .. this was one of the most widely accepted project of this nature to be promoted in Harvey County.” Harper concludes by noting that the project will be available again next year.

Today, the Great Plains Shelterbelt Project continues to promote this  proven conservation practice across the U.S.