The Case Is Stated: the Trial of Pat Rickman

“The Case Is Stated”

Patrick Rickman was charged with 1st Degree Murder for the death of Thomas Williams on February 14, 1895.  On July 10, 1895, the Newton Daily Republican began coverage of the trial. 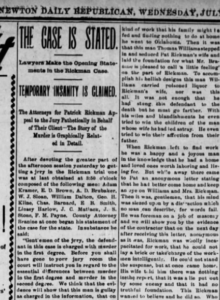 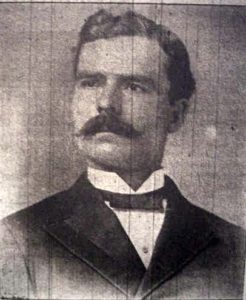 Harvey County Attorney, Charles E. Branine spoke for 16 minutes, describing the details of what happened the morning of February 14, 1895.  He concluded that the because of the “motive and spirit of the act committed by the defendant” jury would be “unable to return any other verdict than guilty as charged.” 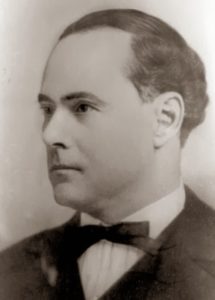 Attorney Charles Bucher gave the opening statement for the defense.

“We did not kill Tom Williams with malice aforethought, nor did we kill deliberately and in cold blood.  At yonder table sits a man for whose life a fight is now going on, Pat Rickman, one of the best men in Harvey County, even if his skin be black.”****

Bucher talked for 30 minutes, describing a family man that found evidence of his wife’s adultery. The resulting despair led him to become insane. Bucher concluded that “it would be proved that insanity was in the Rickman blood and that several of Pat’s relatives had died . . . with diseased minds.” The defense claimed Temporary Insanity.

Cornoner James McKee reported on his findings.  Williams had sustained 5 scalp wounds and a bullet wound. The bullet passing through the right lobe of the liver. McKee observed that  “the gunshot would would under any circumstances cause death in thirty minutes.”

Witnesses for the State

Several of the witnesses were family members that had observed the trouble the couple had been having in the last year and the role that Williams played.  A.B. Burdine, Amanda’s brother, noted that he had advised his brother-in-law to open his sister’s letters.  Mrs. J.A. Robinson, a sister,  recalled that she had met Williams at the Rickman home several times when Pat was not there. Several witnesses reported that Rickman said, “if ever a man should come between him and his wife, he would kill him.”

A friend of Amanda’s that lived southeast of Peabody admitted that she had invited Amanda to a concert on February 14. She claimed ignorance of letters she sent for Williams to Amanda.   Council then introduced and read several letters written by a “woman near Peabody.”  The letters contained “many allusions to a certain ‘T’ . . . he would furnish the money for her [Amanda]to come [to the dance/concert].”

Ed Slater noted that “Pat was always very careful about his money . . . heard him say there was nothing too good for his wife and children.”  Slater also recalled an incident where he spoke privately with Rickman.

“He did not seem himself . . his face . . . assumed such a frightful look and he acted so queerly that I was afraid of him myself. I told him, ‘for God’s sake Pat, don’t do anything to lay yourself liable.”

In closing it was noted that no weapon was found on Williams’ body.

Witnesses for the Defense

The defense called a variety of witnesses including  family members, people that had worked with him,  and businessmen.

Dr. Miller, the Rickman family doctor, was the first witness for the defense. Miller explained a theory that “men may become insane over the loss of fortune and friend” and  in some cases insanity may be hereditary. Miller also noted that Pat “always showed a great deal of affection for his family.” Dr. Miller treated Rickman after the shooting, Rickman did not seem to recognize him.

J.H. Anderson had known Rickman for “many years as a sober and industrious citizen and good neighbor.” Anderson went on to say that he had not seen Rickman in several years and only recently met him again.

“I noticed at the time that there was something very peculiar about his appearance.  In fact, his facial expression was that of an insane man.”

Anderson felt he was qualified to make such a statement due to his work as a superintendent of a farm at an insane asylum in Iowa.

David McBride, who had worked with Rickman in Oklahoma, noticed a change in Rickman after he received a letter from Newton.  Rickman was “unable to work, but merely wandered around.” The next day he left for Newton.  W.P. Walters hired Rickman for various jobs over the years. He observed  that in the days before the shooting that Rickman “was not right.”

A cousin, Wayman Anderson reported that he had heard Tom Williams bragging that “the Rickman’s are all cowards that he would go see their wives whenever he pleased.” Anderson observed that Rickman “looked like an insane man” and noted that several uncles had been insane.

Another cousin, Nate Anderson  also noted a change in Pat recently. He  “thought from his  general appearance that [Rickman]  was going the way other members of the family had gone. . . insane.” Nate Anderson also knew Williams and recalled a conversation where Williams had asked him “very suspicious questions about women and girls in Newton.”

Witness after witness took the stand and described Pat as a “peaceable” and of “good character.” They all noted a change in his behavior in the weeks before the shooting.

On July 16, Amanda Rickman was called to testify. The Newton Daily Republican printed her testimony in the paper. 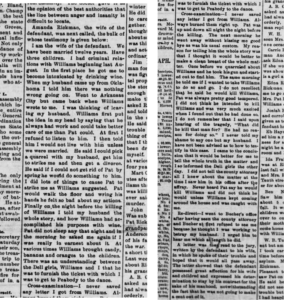 She and Pat had been married 12 years and had three children. She described her involvement with Thomas Williams.

“I had criminal relations with Williams beginning in August . . . he got me to become intoxicated by drinking wine.”

She explained that she “was thinking of leaving my husband.  Williams first put the idea in my head . . . he could take better care of me than Pat.”  Williams directed her to pick a quarrel with her husband so that he would “strike” her,  giving her grounds for divorce. She admitted that despite  “behaving badly, Rickman would not strike me.”  The night before the 14th, she confessed all to her husband. She concluded, “I did not think he intended to kill Williams.”

The defense also tried to paint Williams as less than upstanding man in the community.

Eb Hayn described an interaction with Williams when he first came to Newton. He rented Williams a room above his business and the “first night he [Williams] and two women occupied the room.” Hayn kicked him out the next day.

Several family members reported seeing Williams at the Rickman home at all hours. Cyndy Rickman, married to  cousin Joe, reported that Williams had tried to kiss her, which she did not allow.  Perhaps most alarming was the testimony of Edna Rickman, Pat’s 14 year old  half-sister. She testified that Williams had asked her to go riding alone. She had refused. When Pat found out about this encounter he cried out, “My God! now he has ruined my wife, he is going to destroy my sister?!?”  Joe Anderson also recalled that Williams had made threats to Rickman declaring that if Pat “wants to get in the game with me, he will find me loaded.”

The defense rested on Tuesday morning at  9:30.

County Attorney Branine called several more men who were eye-witnesses for additional questions.  J. B. Fugate reported that he knew both men and had been with them both the night before and had noticed nothing different. Herbert Wing, reporter for the Republican had visited Rickman in jail soon after the shooting.  During the conversation Rickman asked Wing, “what the general opinion was?” Wing replied that the “public belief was that he had killed Williams because he was too intimate with his wife. To which Rickman replied, ‘yes, yes that’s it’.”

“Arguments of the Attorneys”

In closing arguments for the State, Attorney Branine reminded the jury.

“A young man . . going about his business . . . heard the sharp report of a gun and felt a bullet pass through his body.  He died in a few minutes.  The people of this community were shocked. Law and decency had been outraged. . . . In closing, I will simply remind you that are on oath to render a verdict in the case relying only on the law and the evidence.”

Hon S. R. Peters began arguments for the defense. He spoke for 3 hours and “made a most eloquent appeal for his client.” 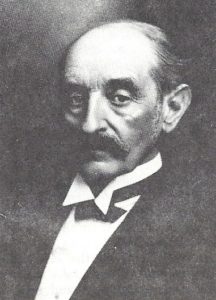 Next, Attorney Bucher “with his lightning rapidity of delivery talked to the jury in all for three hours and twenty minutes.”  The Newton Daily Republican provided only “a bare summary of his argument.”

Bucher began with a personal story of the time Rickman saved his son from a horrible accident.

“A few years ago a boy was being carried to certain death by a maddened team of horses and this man, Pat Rickman, at the risk of him own life, saved him from a terrible fate.”

He then outlined the “indications that Rickman was insane at at the time of the affray and before.”

The attorney reminded the jurors that they held the destiny of this man “within your grasp.”

“His home destroyed, his wife the wreck of what was once a noble woman, his children dishonored who must yet live to know their mother’s shame and guilt.”

He urged the jury not to “heap shame and ignominy upon this man and his helpless children by consigning him to a felon’s grave.”

Attorney Branine had one more chance to make the case for the State. He summed up the case with

“a most eloquent appeal for the upholding of the law . . . no matter what their sympathies might be in the case. They were there to do their duty as sworn officers of the law.”

The jury went to deliberate at 3:48 in the afternoon.

“The Finish of a Great Fight”

At 5:10 pm, the jury returned with the verdict after an hour and 15 minutes. 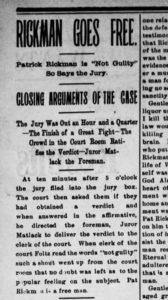 “When the clerk of the court Foltz read the words ‘not guilty’ such a shout went up from the court room that no doubt was left as to the popular feeling on the subject.  Pat Rickman is a free man.”

The next day, Newton Daily Republican noted “that there had been a decided reversal of opinion since the trial began in favor of the defendant.” 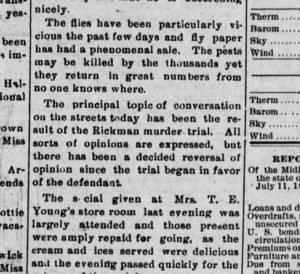 “Saved by the Insanity Plea” 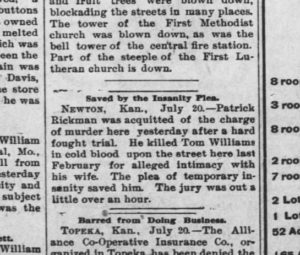 Pat married again in 1911, an Englishwoman named Mary Rhodes.  Rickman continued his work in construction and died in 1926.

Amanda Burdine Rickman moved to Arkansas City. She died in 1930.