Looking Back: The Building at 214 Main

This article is part of a series, Looking Back at the Oldest Buildings on Newton’s Main Street.

The buildings on the east side of the 200 block of Main in Newton are some of the oldest buildings in Newton, several dating between 1886 and approximately 1895,  including the buildings at 214 and 216 Main. Although this post will focus on 214, the adjacent building was constructed at the same time and still retains many features from 1889-1895. These features include the cornice and the original shape of the windows on the second floor is also apparent even though they have been brick in. 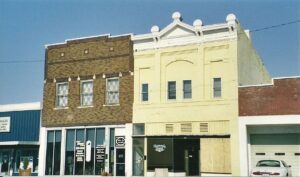 A Wood Frame Stucture at 214 Main

According to the 1884 Sanborn Fire Insurance Maps of Newton, there was a small, wood frame building, identified as a drugstore, located at 214 Main. 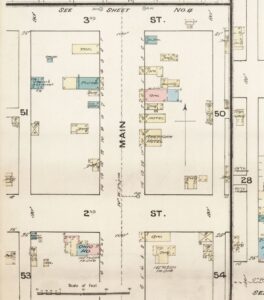 As the block begins to fill in over the next several years the small drugstore remains at 214 with a grocery store at 212.

In 1884, Thomas H. Sharits moved his barber shop to 214 Main for a short time.  Tom Sharits was described as a “good barber, has a neatly furnished, pleasant shhop and gives general satisfaction to his customers.” He also had a reputation as “the great Jack Rabbit destroyer.” The papers mention his hunting ability several times including successful coyote hunts. Throughout the 1880s and 90s, Sharits moved the location of his barber shop several times. 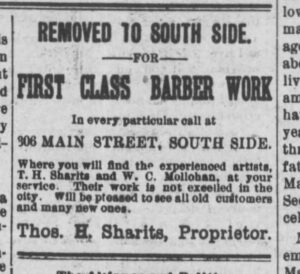 The earliest Newton City Directories also indicate that this building also served as a boarding house with two boarders living at 214 Main in 1887. 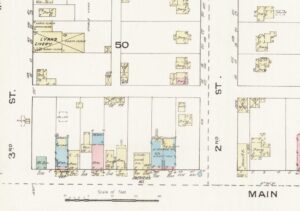 Another business that located in the building was Powell & Krueger. In 1892, they advertised that  “you produce is money . . . you can buy anything with”  at their store located at 214 Main. 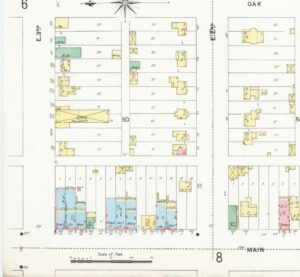 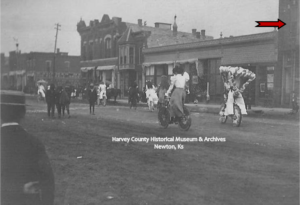 The March 28, 1902 Newton Daily Herald  noted that one of the leading enterprises on the south side is the grocery and bargain store of W.D. Congdon.” After one year in his new location at 214 Main he “has built up an extensivve trade.”  The second floor had rooms for boarding. 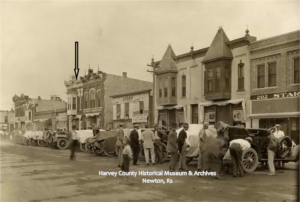 200 block of N. Main, Newton, KS, c. 1910. 214 Main indicated with an arrow. Businesses on the east side of the street are identified in a note glued to the back of the mounting. The businesses are Star Grocery, Up-To-Date Steam Laundry, a junk store with Ringling Bros. advertising on it, Toevs Bros. Grocery, Cavneys (sp.) Wallpaper Store, Pete Park’s Meat Market, Kruegers Grocery Store and then Young’s Grocery Store in 300 block. 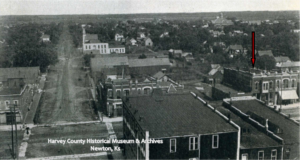 The front facade underwent significant change  between 1920 and the late 1930s to the current look of the building. The second floor bay window and the tin cornice removed. The second story windows were also changed to a square shape. The general appearance of the front facade was more flat. 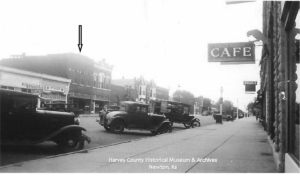 In the 1940s and 50s the building provided a space for one of several Newton movie theaters. 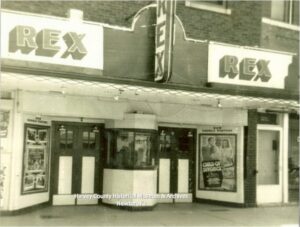 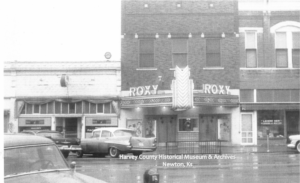 Exterior black and white photocopy showing Roxy Theater, 214 North Main, Newton, Ks. LaVern Hein Plumbing and Heating business to the south (right side of picture) and a bar to the north.

Over the years these two buildings have housed many varied businesses as Newton changed and grew. The appearance of the two buildings also underwent changes with each decade. Although the front facades have been altered, the buildings at 214-216 Main are part of a small group of structures that remain from the 1880s-1890s.