A new HCHM mini-exhibit is up at the Newton Public Library featuring construction photos of several ‘landmark’ buildings in Harvey County and this posts features another one.

“Dirt will be Flying”

Early in January 1908, the Evening Kansan Republican reported that a “new federal building scheduled to be built in Newton will be commenced within the near future and be rushed to completion.”  Plans for the new post office had been drawn  and the supervising architect of the U.S. Department of Treasury,  James Knox Taylor, noted that “dirt will surely be flying by May 1st and before winter the roof on.”

This proved to be an optimistic timetable. In June, the Kansan reported that there would be a delay.

Taylor explained that “the department has under way the construction of over 150 public buildings in various states authorized by congress two years ago.” Taylor concluded that “while it may seem long to the citizens of your city, it is rapid for the government.”

The federal building in Newton would have to wait until the spring of 1909.

“Dirt is Flying at Last!“

The Evening Kansan Republican in January 1909 reported that they were “delighted to see a load of lumber” at the location of the new post office. After a year of waiting,  “dirt is flying at last.”

By the end of February 1909, the site for the new building had been excavated.  People often stopped to watch the progress. 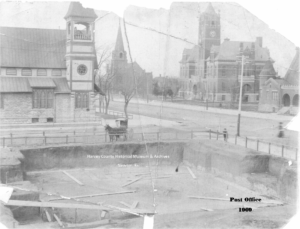 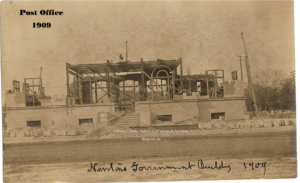 In an article reviewing the year 1909, the reporter noted that Main Street had been paved from 1st to 8th, which “added to the beauty as well as value of Main street properties.”  He concluded that “the government building is assuming shape and should be ready for use in the next six months.  The year ended, but its work remains.”

Throughout the spring, the editor remained positive  that the federal building would soon be done. Several large items were completed including the concrete ceiling  and the installation of the steam heating plant. The target date for occupancy was July 1st.

“It is only a few weeks until the people of Newton will have the use of the post office they have so long waited for.”

The wait continued.  In June, the editor observed that “work on the federal building is progressing at a satisfactory pace now-days.”

“S—-h! Don’t breathe it out to a soul, but it may be another month before the post office gets moved into its new quarters in the elegant federal building at Main and Seventh streets.”

The target date of July 1 passed without the completion of the building. In August, the editor outlined some of the difficulties that had plagued the project over the spring and summer.

The project had been delayed due to strikes, materials not arriving and “the failure of different subcontractors to perform their part of the work.” In one case, the carpenters “quit work twice over alleged failure on the part of the contractor to pay the union scale for overtime and Sunday work.”

Mid-August problems with the ceiling were discovered and “it was necessary to go over the crimping and see that it was properly attended to. . . “

At the end of August, another set-back when the marble cutters “walked out  in response to a telegram from the business agent of their union in Kansas City.” It was noted that “officials are becoming thoroughly disgusted with situation.”

By the end of September there were rumors that the project would be done —soon.

“For many, many months running back seemingly into the misty ages there have been periodical rumors to the effect that the post office was to be removed to the new federal building, but each of these rumors have proven false. . . however the latest is given only as a ‘probability’ not as assured fact.” 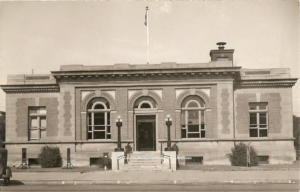 By December 1910, the trials of the past 2-3 years were a memory and the post office was a busy place.  One unintended problem did develop concerning a revolving door.

“So attractive are the revolving doors at the federal building that it has become the custom of a number of school children to go to the post office after the close of school and play ‘merry-go-round’ in the doors.”

Parents were warned that there was a serious danger of breaking a limb or other  injury with the large number of children behaving recklessly. The editor pointed out that  “Uncle Sam’s people . .  should not be required to look out for the life and limb anyone having no real business at the post office.”  In addition, the public was also “greatly inconvenienced in getting in and out of the building by the play.”

Today, the “Federal Building” is the home to Cornerstone Law Offices.