Stuff We Love: Volunteering at the Canteen

This week’s post is based on memories shared by Vere English, HCHM Board Member, for the exhibit, Stuff We Love. Vere picked a photograph of the ladies that served at the Red Cross Canteen during WWII.  This was just one of several groups of women that would meet the trains and provide snacks for the troops as they came through Newton. 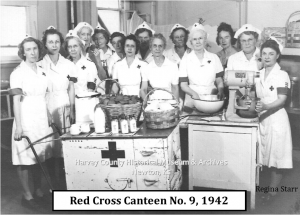 As a boy, Vere remembers traveling to his grandmother’s house about once a week to visit. His aunt, Regina Starr (also a teacher at McKinley), would tell stories of her volunteer work at the Canteen in Newton during World War II. She would mention the piano that the soldiers signed, but even more importantly, the music that they would play on it. According to her, some were “quite good and entertaining.” 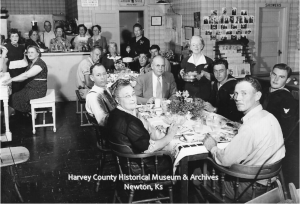 Sometimes a soldier might stay a little too long in the lounge eating cookies and playing the piano. They would have to run after the departing train and jump on. Some lost their hats in the process. For shorter stops, the women from the Canteen would walk along the trains with huge wicker baskets full of cookies and the soldiers would reach out of the windows to grab a few. 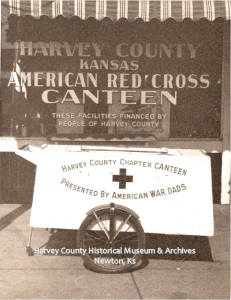 Vere also remembered coming to Newton on Saturday nights with his family. They would park the car near the tracks and watch the trains go past. For a 10 year old boy, it was fascinating to watch the train cars loaded with war machinery and troops go by. Vere recalled that the trains ran 24 hours, both ways.

Do you have memories of the canteen?