An Immense Crowd Was Entertained

In the early 1900s, the Newton Commercial Club, which was made up of local businessmen and community leaders, worked tirelessly to promote Newton as prosperous and progressive.

In 1911, the city leaders published Newton, Kansas:  Past and Present, Progress and Prosperity.  The publication included “sketches of various industrial and business concerns representative merchants, those who stand foremost  in the thought and action in Newton.”

The Commercial Club was also  involved  with planning and promoting an “Aviation Meet” in 1911.  Aviation Meets were started in France in 1909 and were  popular in the United States in 1910 and 1911. Aviation Meets gave pilots a chance to show their skill and thrill spectators  with their daring. 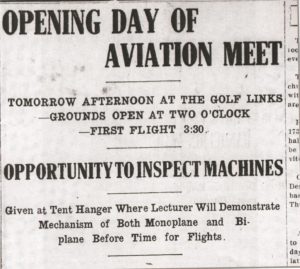 According to the editor of the Evening Kansan Republican;

“never before in history has a city of the size of Newton undertaken such a tremendous project as bringing a real aviation tournament” to the community.

The Moisant International Aviators had been touring the United States for five months.  Rene Barrier and Rene Simon, French aviators, and Capt. John J. Frisbie and Joe Seymour of the United States would be in Newton to demonstrate the planes. The editor of the Evening Kansan Republican declared that Newton was “offering a treat to all Kansas” by hosting this event.

The newspaper editor described the skill of the participants.  Capt. Frisbie, an officer of the United States Aero Reserves, was “one of the most daring biplane operators.”  Another “noted air-pilot,” Joe Seymour, was a “famed auto racer who has taken to aviation.” 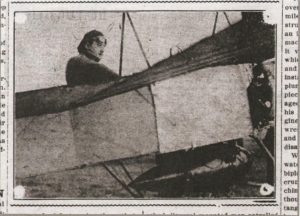 Frenchman, Rene Barrier was perhaps the most well known at the time.  He was known as “the greatest altitude and cross country flyer” and in November 1910, he had broken the “world’s speed records when flying in a cross city race over Memphis, Tenn.” 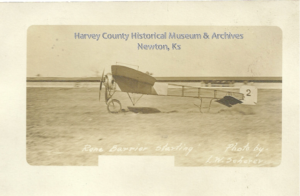 Barrier’s machine was a “racing Moisant monoplane” that could travel from 50-70 miles an hour.

The Meet was held at the large open area north of Newton known as the  “golf links.” 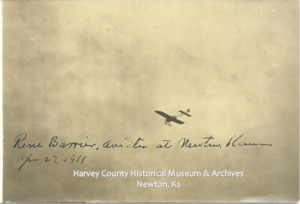 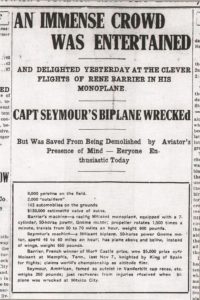 The next day, the Evening Kansan Republican reported that a crowd of 8,000 spectators, with around 2,000 from out of town, came out to the field to watch the dare devils.

Scenes from the Day 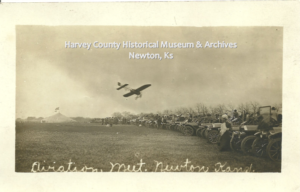 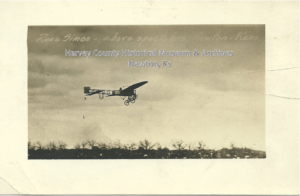 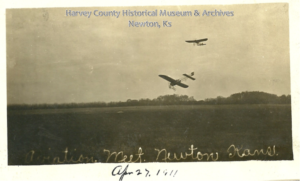 Curious about Newton’s first airport? Our post next week will explore aviation in Newton during the 1920-40s.