Our exhibit, The Colorful Kitchen: 100 years of Pyrex, 1915-2015, opened this week and we have already had several interesting conversations with people that have stopped by.  One interesting discussion involves ‘old’ Pyrex and ‘new’ Pyrex- is there a difference?

In 1913,  Corning chemist, Dr. Jesse T. Littleton, gave his wife, Becky, a Nomex battery jar, cut in half to use for baking.  The results were a happy surprise. Becky noted that food baked in the glass jar baked as well as, if not better than traditional ceramic dishes.  The glass used in the battery jars was made with borosilicate glass which was also used in weather shock-resistant lantern globes. 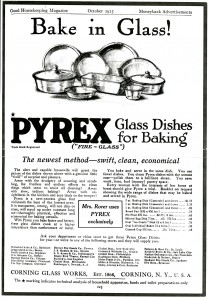 The first Pryex pieces were clear. 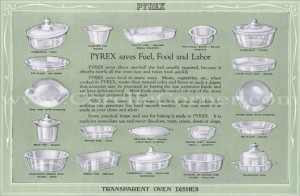 Eventually, patterns were added. During the 1950s and 60s, the dishes became popular wedding presents. 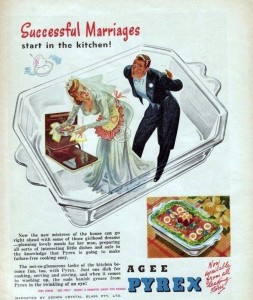 Pyrex remains popular today, but are the new dishes as good as vintage pieces? Consumer Reports Magazine conducted some experiments to determine the truth. 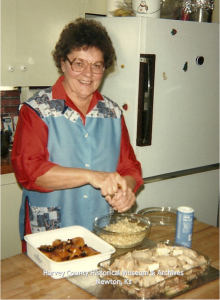 According to an article in the January 2011 Consumer Reports  Magazine the formula used to make Pyrex underwent a change after World Kitchen and Anchor Hocking took over the manufacture of the glass in the 1980s and 90s.  The original 1915 formula used borosilicate to strengthen the glass, but at some point a switch was made to the less expensive soda lime glass in the U.S..

There are questions about when this change occurred.  Some maintain that the borosiliacate glass was phased out almost 60 years ago, but most experts note that the lime soda glass was likely phased in during the 1980s. At least one executive scientist at Corning reported that borosiliacate was still in use in 1987, when he retired. Whenever the change occurred, the newer Pyrex is usually lighter and according to some more likely to explode under extreme temperatures. European Pyrex is still made with the borosiliacate glass.

Consumer Reports conducted several experiments on Pyrex in 2011 and the results can be seen at this link.   http://www.consumerreports.org/cro/magazine-archive/2011/january/home-garden/glass-cookware/glass-cookware/index.htm. The results of the experiments do suggest that newer Pyrex is more likely to shatter under extreme temperatures.  Older Pyrex and Pyrex from Europe did break occasionally, but at a significantly higher temperature than new dishes.

“I don’t use new Pyrex . . . it is not as durable as the vintage Pyrex.  While I have no problem baking in a dish that is forty years old or more, I’m not comfortable using a Pyrex baking dish made in 2013. Two different products entirely.  Yes, I’ve had new Pyres dishes explode on me.” -Christy Jordan, southernplate.com

Regardless, Consumer Reports urged cooks to read the directions for proper care and use of  Pyrex, no matter what the age, to minimize the possibility of breakage.

Our exhibit will be open through December 3, 2015 during regular museum hours: Tues-Fri 10-4 and the first and third Saturday of the month from 10-4.