‘What Did It Say To You?” the Art of Vernon Rickman

Recently, we were pleased to receive a painting by local artist, Vernon R. Rickman, for our collection.  Rickman worked at the Smithsonian Museum of Natural History for 23 years.

He began as technician in 1958. At the time of his retirement in January 1981 he was a senior sculpture. One of many projects he worked on was the Neanderthal figures for the permanent exhibit “Ice Age Mammals and the Emergence of Man.” He later recalled this was one of his favorite projects.  Another project involved preparing full-sized mannequins of Pat Nixon, Betty Ford and Rosalyn Carter for the First Ladies Hall in the National Museum of American History.

During that time, he also painted privately.    His body of work included over 300 oil paintings, in addition to sculptures and reliefs. The collection was donated to the Carriage Factory Art Gallery in Newton, Ks.  One was also given HCHM for our collection of local Harvey County Artists. 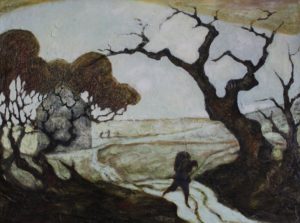 Vernon Reid Rickman was born in Newton on August 4, 1929 to Theodore and Mattie Jordan Rickman.  He had three sisters and a brother.

Shirley Elliott, a cousin remembered that “he always had a pencil in his hand.”

At Newton High School he was fortunate to have Marie Orr as an art teacher.  She recognized his talent and encouraged him to explore different mediums throughout high school.  As a senior in 1947 he won the Scholastic art contest and spent a semester at the Cleveland School of Art. 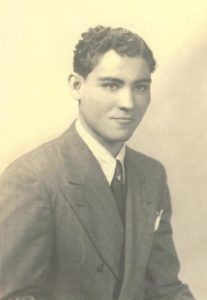 After nearly 2 years in the U.S. Army, he enrolled at the University of Kansas. In 1957, he graduated with a Bachelor of Fine Arts degree.  He began graduate studies at the Kansas City Art Institute, but quit to “earn a living” at the Smithsonian Institution.

After he retired, Rickman returned to Newton where he continued to paint.  A nephew, Michael Scott recalled one visit to Rickman’s home soon after;

In 2007, Rickman had a show of his private work at Bethel College.

In a conversation about his work with his nephew Ted Scott, who asked, “Where did this come from?”

Rickman  replied, “you had to figure it out for yourself-what did it say to  you?”