What was life like for the women who came with their husbands to Newton in 1871-72? Their stories are usually harder to find and not as glamourous, but do give a glimpse into real life on the prairie.

In February 1872, Samuel Lehman and his bride arrived in Newton. Mrs. Lehman had the distinction of being “one of the first brides in the primitive town” [Newton]. When the Lehmans arrived in Newton, Samuel went into the hardware business  with Dwight R. Bennett, who also had a young wife, Sarah. The two were neighbors and became friends.

A Bennett family story tells about interactions between the Native Americans and the two young women.

“The Indians from Indian Territory would come to Newton.  They were quite wild  at the time . . . Sarah with her young neighbor, Mrs. Lehman who lived next door would lock their doors and would stand outside their houses to trade grease and sugar and other articles or groceries for beads and baskets made by the Indians.”

One can only imagine what other experiences the two shared.

At the time of the Lehman’s arrival, Newton boasted between 13 & 14 buildings and “nothing but prairie to be seen and great herds of cattle” according to the memories of Samuel Lehman. One can only imagine how it looked to his new bride, Louisa.

A year later, Bennett sold his interest in the lumber company to Lehman and moved his family back to Ohio. Perhaps Louisa gave this photo of herself to Sarah as a  remembrance. 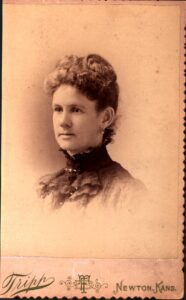 Mrs. Louisa J. Glendening Lehman continued to live in Newton and became a leader in the community.  She was born in Bunrysburg, Ohio on February 16, 1848 and died on June 6, 1918 in Newton, Ks.  In  1870, she moved to Topeka, Ks where  she met and married Samuel Lehman on February 12, 1872. The newlyweds left for Newton shortly after. The couple had two children, Glenn and Neva. 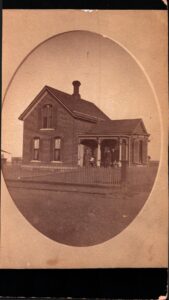 Described as cheerful person, devoted to her family and church always “bringing sunshine to sorrowing hearts wherever she found them.” She served has president of the Ladies Reading Circle for sixteen years “during a period when capable leadership meant so much and never failed in her service or faithfulness.”

One wonders what other stories she would tell about the early days in Newton.